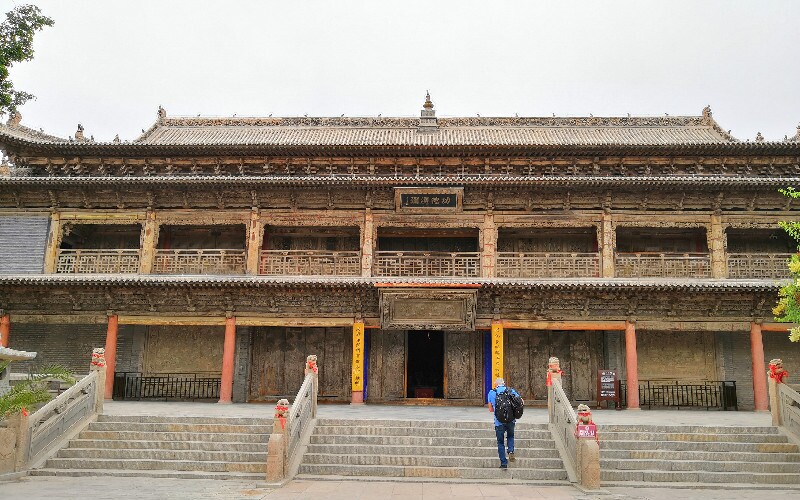 The Grand Buddha Temple in Zhangye

The Zhangye Grand Buddha Temple was first built 900 years ago during the first year of Emperor Chongzong's Yong'an era in the Western Xia Dynasty. In 1274, Marco Polo started his journey to the East and passed through Zhangye. He was impressed by the Buddhist culture and beautiful architectures, and he stayed there for a year.

The Grand Buddha Hall is huge in scale, at 33 meters in height and as long as nine rooms. It's also the biggest Buddha hall in China. There are fine wooden carvings of dragons, tigers, lions, and elephants on the roof beams and eaves. You can still recognize them clearly.

There are two engraved bricks on both sides of the hall’s gate. The left side displays the inscriptions "Reaching the Elysian Fields" and "Western Paradise". The right side has "Three Buddhas in Nirvana" and "Respect the Elysian and Develop the Sutra" inscribed on it. You can see the vivid carvings of figures that tell Buddhist stories.

China's largest indoor reclining Buddha, the Nirvana of Shakyamuni Buddha, is lying peacefully in this temple on a 1.2-meter-high altar in the center of the hall.

The length of the Buddha’s body is 34.5 meters, the shoulders are 7.5 meters wide, the ears are 4 meters long, and the feet are 5.2 meters long. A man could lie on the Buddha’s middle finger, while eight people could sit shoulder to shoulder on the Buddha's ear. This makes it easy to imagine the sheer magnitude of the sculpture.

The figure is covered with gold leaf and is painted in various colors, making it so vivid that it seems awake. However, if you try to call to it, the figure seems to be sleeping.

In 1445 (during the Ming Dynasty), Emperor Yingzong sent 6,361 Buddhist scriptures to the Grand Buddha Temple as a gift. The imperial commissioner was very interested in the Buddhist scriptures and paid to make a copy of Prajnaparamita, the first part of the scriptures, with gold ink.

A nun named Yao is reputed to have protected the scriptures. She put them in a golden box and buried them inside the walls. One day, people found the scriptures and were shocked by the amount of them and the golden writing.

All the scriptures are well-preserved and people call the Grand Buddha Temple a library of Buddhism.

Tour the Grand Buddha Temple with Us

When visiting the historical sites in China, it's hard to get deep into the culture and the stories behind it. Therefore, you are recommended to find a tour guide who will introduce these to you. Our local guide knows the temple's history and the detailed stories of the frescoes, which will make your Grand Buddha Temple visit more interesting.

If you want to tour the Grand Buddha Temple and explore more places along the Silk Road, please see our popular tours below for inspiration: