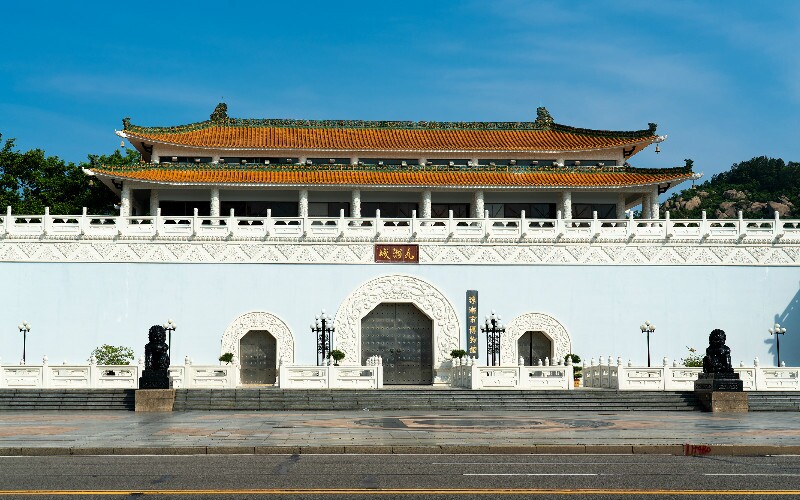 Zhuhai City is a special economic zone near Hong Kong that is a resort area for Chinese tourists, and it is also a area where some people from nearby Hong Kong and Macau go for entertainment because the prices are lower. During the late 19th century and early 20th century due to the presence of the foreign colonies at Hong Kong and Macau, Zhuhai became prominent for trade and education in south China, and the area was more quickly modernized. This transformation of Zhuhai from a backwaters to a leading center of societal change happened partly through the influence of Chinese who returned to Zhuhai after working in the West. The Zhuhai Museum is a place to learn about the history of the area, and it sits in a garden.

This large museum in downtown Zhuhai was recently renovated, and it sits in its own garden. The garden and park area itself is one of the attractions in the busy downtown area. The exhibits include a lot of antique Chinese ceramics. The museum is usually considered to be in the top 20 attractions in all of the city of Zhuhai.

The Zhuhai City Museum (珠海市博物馆) was built in the downtown area in 1999. Along with preserving old artifacts, one of the museum's main missions is to raise the cultural level of the people. It covers about 15,000 square meters or about 3.7 acres, and the large building has a traditional look. The museum is on two floors of the building.

China Highlights can help you customize a tour to visit Zhuhai Museum and other highlights in Zhuhai.

Address: 191 Jingshan Street, Jiuzhou, Zhuhai. You can show this address to a taxi driver. 珠海市博物馆- 广东省珠海市景山路191号.