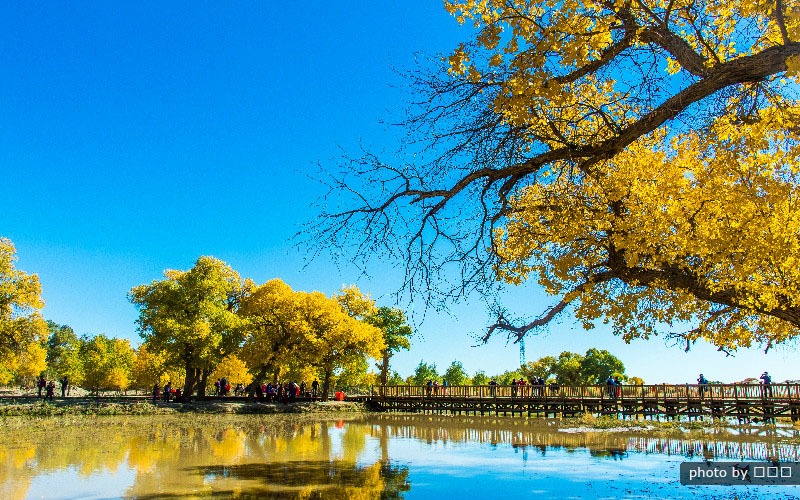 Located in Dalaihob (Dalaihubu Township 达来呼布镇), Ejina Qi (county), Alxa League (prefecture) of Inner Mongolia, Ejina Euphrates Poplar Forest is one of the largest of its kind and the best Populus euphratica (a.k.a. Euphrates poplar or desert poplar) forest area in the world.

The other notable area (nominated for UNESCO protection) is in the Tarim River basin in Xinjiang, China. However, Ejina's poplar forest is more accessible and popular: it is one of the photography paradises of China.

The Populus euphratica is also called the 'hero tree' in the desert, because of its amazing ability to resist drought, wind-driven sand, salt, and alkali. It can survive and reproduce in the desert where it is dry and the temperature difference between day and night is big.

Ejina is a county located in the very westernmost part of Inner Mongolia Autonomous Region. It adjoins Alashan (Alxa) Right Banner in the southeast, Gansu Province in the west and southwest, and borders Mongolia in the north. Covering an area of 114,600 km², Ejina is the county with the largest area but the least population in Inner Mongolia.

The famous Populus euphratica forest is about 2.5 km (1.5 mi) from Dalaihubu Town, the center of Ejina.

Why Ejina's Poplar Forest is the Most Popular

What to See in the Ejina Poplar Forest

Ejina Euphrates Poplar Forest Scenic Area is the earliest developed and the most complete tourist area in Ejina Qi. There are eight bridges or scenic spots in the scenic area, and each bridge has its own charming scenery.

The Second Bridge is primitive and called the 'Reflected Woods'. Heishui River passes through it. The waterway is wide with poplar trees growing on both sides. The golden trees are mirrored in the clear Heishui River, making a beautiful and dreamy view. Together with the scattered yurts, and the rolling sand dunes as its background, the Second Bridge is a good place to take photos, especially at sunset.

The Fourth Bridge — the Hero Woods

The fourth bridge scenic area is the most popular because is the most concentrated area of Populus euphratica and the filming location of the famous 2002 film "Hero", hence it is also called the Hero Woods. Because of the film, Ejina Euphrates Poplar Forest became well-known in China and abroad. A branch of the Blackwater passes through the woods, so you can walk along the river.

The fourth bridge is a good place to shoot a flock of sheep (with your camera!), as they run through the poplar forest driven by herdsmen. Because of the sandy ground of the forest, when the sheep run the dust flies. The flying dust and the colors reflected from the leaves make a good effect for pictures.

The Seventh Bridge — the Dream Woods

The seventh bridge is also called the Dream Woods. The Populus euphratica are relatively young here, so they turn yellow earlier than in other areas of the forest. Although the desert poplars are still young and small at present, they are very dense and have a long period of autumnal yellow leaves.

The eighth bridge area is at the northern edge of Badain Jaran Desert. Featuring the boundless desert landscape, the eighth bridge is also called the Sand Sea Kingdom. Besides appreciating the poplars, you can also experience sand sledging, camel riding, and taking an off-road vehicle to cross the desert.

The eighth bridge is the best place to shoot the sunrise, which is a good time to ride a camel in the vast desert (before it gets very hot).

Besides the above four bridges, the Taolai Woods at the first bridge, the third bridge's renowned red willows, and the fifth bridge's folk custom garden are also worthy of visiting. The sixth bridge has not been opened yet, so the shuttle bus will not stop there.

The golden leaves of the desert poplars are the main highlight of the scenic area. The temperature, humidity, and trees' age have an important effect on when the leaves turn yellow. Generally speaking, the leaves began to turn yellow when the temperature drops to 5°C (41°F) to 10°C (50°F), and younger trees in areas with less water will turn yellow first.

How to Get to the Ejina Poplar Forest

Ejina Populus Euphratica Forest is located about 2.5 km away from the center of Dalaihubu Town, Ejina Qi, Alxa, Inner Mongolia. You can get to Ejina by air, train, or long-distance bus.

Opened in 2013, Ejinaqi Taolai Airport is about 10 km (6 mi) northwest by road from Dalaihubu Town. At present, there is only one route to and from Xi'an with a stop at Alashan Left Banner Bayahaote Airport. There is only one flight (JR1514, 1215–1625) every day. Tickets can sell out during the high season, so early booking at least one month before is suggested.

Ejina Train Station is about 20 minutes' drive from the poplar forest. The railway station only has one service between Ejina and Hohhot of one train per day. The train is K7912 (1723–0819) and it takes about 15 hours. It is not easy to get a ticket during the high season.

You can take a long-distance bus from Zhangye to Ejina. There is only one bus per day from Zhangye, departing at 10am and taking about 7½ hours.

As transportation to Ejina is underdeveloped and there is no direct flight from any big city, such as Beijing, Shanghai, or Chengdu. So, we always suggest visiting Ejina with the Silk Road. Besides, as public transportation there is difficult to navigate, a guided tour is highly recommended. "When Silk Road Culture Meets Fabulous Fall Colors" will bring you a new and special experience.

We are specialists in tailor-making tours. Just tell us your requirements and interest and we will design an Ejina trip especially for you.

Where to Stay in Ejina

As the golden leaves of the Euphrates poplars in Ejina only last for about a month from mid-September to mid-October, travelers usually choose to visit Ejina in this one-month high season. Tens of thousands of people per day come to Dalaihubu Town, Ejina, making this small town quite crowded and hotel booking very tight during that time.

There are three choices for your stay in Ejina: normal hotel stays, family accommodation, and tent camping. The second bridge and the eighth bridge in the Ejina Euphrates Poplar Forest, and Juyanhai Scenic Area (about 50 km or 30 miles north from Dalaihubu Town) are the designated campsites.

In the busy season, the hotel price is much higher than usual, and the booking is always tight. So, we suggest booking an Ejina trip at least 2 months in advance.

Ejina Populus Euphratica Forest is a beautiful place for visiting and especially a paradise for photograph lovers. However, Ejina has a typical temperate continental climate and it is dry always, windy, and sandy. Here are some travel tips for you to keep in mind while you prepare.

1. The most suitable time for shooting the poplar scenery is 9–10 am and 3–4pm when the light is softer and the desert poplars seem more golden.

2. The public transportation in Ejina is not well developed and it is not convenient for self-touring. A guided service is highly recommended.

3. Bring both thin and warm clothes with you. Ejina enters its cool autumn from the middle of September. However, because Ejina is in the Gobi Desert area and the sunshine hours are long, the temperature during the daytime is still hot. It is recommended to wear a long-sleeve shirt and maybe a thin jacket in the daytime, but warm clothes such as sweaters and coats are needed in the morning and at night.

4. Bring enough sun protection. The sun is strong in Ejina and you can get burned more easily than you might expect, so please bring sunglasses, a hat, and sunblock.

5. Drink more water. It is always dry in highland/desert areas, so drinking more water and eating more fruits will help keep you hydrated.