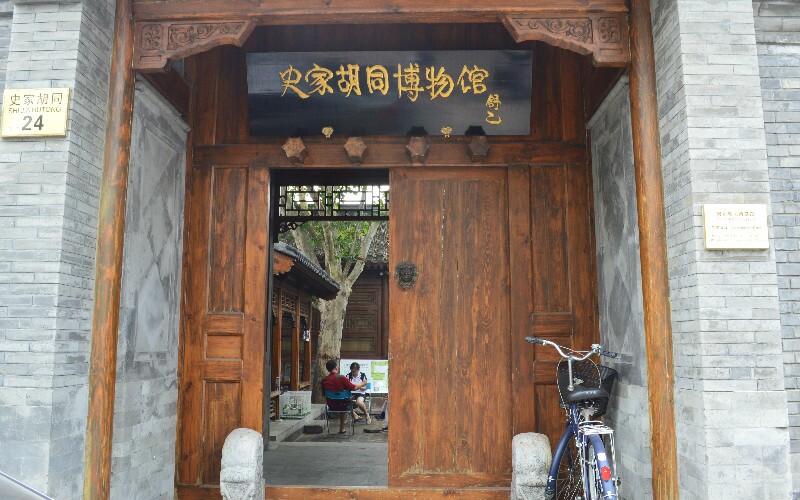 How many stories can be hidden within one long hutong? Walking into courtyard 24 of Shijia Hutong, a hutong museum, you will be greeted by a bumpy road and decorations reminiscent of the Republic of China.

The entire museum takes up 1,000 square meters, and consists of eight exhibition rooms and one multi-function room. The various items on display show the hutong life as it was decades ago. There are copies of labor contracts from the 1920s and 1930s, shallow baskets used by traditional Chinese households, and faded bus tickets that haven't been used by citizens for a very long time. There are also two rooms whose interiors are furnished according to typical domestic furnishings of a Beijing family from the 1950s and 1960s, as well as the 1970s and 1980s, respectively. In a room from the 1950s or 1960s, there would be a bed, a table, two chairs and two dressers, all simplistic wooden furniture. A semiconductor radio receiver would be a costly item in such a room.

In contrast, domestic furnishings for a family in the 1970s or 1980s would be more fashionable, with composite furniture introduced into households, thus came the catchy expression, 'We have composite furniture here, we have a convertible sofa there; right in the middle of them lies our black and white television set'. These items are mostly collected from citizens, and they are like witnesses of history, recording the transitions of Shijia Hutong.

In the exhibition room entitled "Memory of Time", you'll find a small workshop-like studio where you can listen to recordings that captured the sounds in hutongs as they were. Professional audio equipment is set up within so that, with a tap on the touch screens, you can hear different ‘sounds in the hutongs’. These sounds are categorized according to three time periods: before the 1950s, in the 1950s and 1960s, and in the 1970s and 1980s. Included there are different devices used by traditional Beijing street vendors to draw the attention of potential customers, like the chimes held by a quack, or the gongs candy vendors used to attract children while travelling from hutong to hutong. Listening one by one to the sounds of wind, rain, thunder, or even the sounds made by night watchers striking a clapper, you will feel like you have been sent back in time to a tranquil hutong in that time period.

Enter the history exhibition room. Right in the center stands a miniature sandbox from Shijia Hutong that is seven or eight meters long by two or three meters wide. Organized neatly within are 130 courtyards with plastered walls and tiles: miniatures of courtyards once inhabited by many a celebrity.

Shijia Hutong is most well-known for its education. In fact, as early as 1724, the second year under Emperor Yongzheng's reign, Shijia Hutong had already established itself in the education world. The Qing Dynasty set up Zuoyizongxue, essentially a private tutoring school for Manchu (an ethnic group in China, to which the emperors in the Qing Dynasty belonged) only, by the western entrance of the hutong. It's more than 280 years old now. In the first year of the Republic of China, Zuoyizongxue was transformed into the Second Municipal Middle School, which in the 1930s was moved to Neiwubu Street which was one street away from Shijia Hutong. In the later years of the 1930s, Shijia Hutong Elementary School was established in place of the former Second Middle School. These two schools have remained the best in Dongcheng District, and they are among the best schools in Beijing.

The Bureau of Educational Missions to the United States played a very important role, even though only three groups of students actually took the examination there. The government had been planning to build Tsinghua Yuan, but the school was not to be built in one day, so they held three examinations in Shijia Hutong. After that, the government no longer organized the examinations; instead, they delegated the responsibility of selecting students to study in the United States to Tsinghua University. Therefore, it's not too far-fetched to say that Tsinghua University had its origin in Shijia Hutong. Many celebrities passed their exams in Shijia Hutong and went abroad to study.