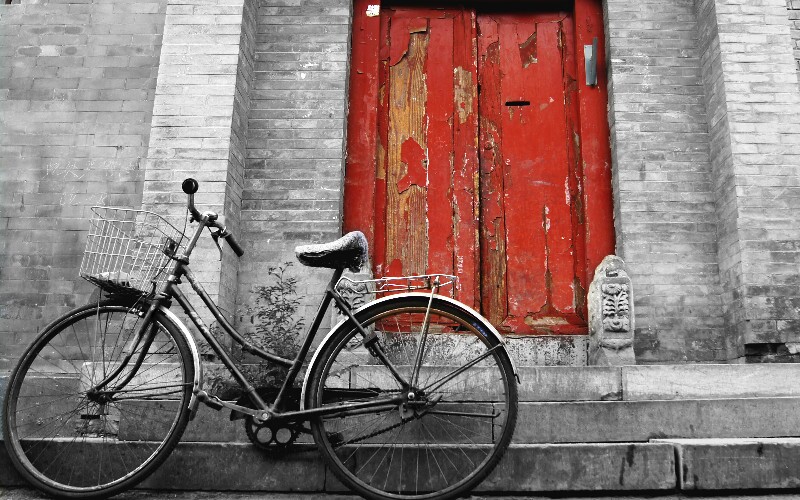 The old lanes of the Beijing hutongs, many laid out hundreds of years ago during the Ming and Qing dynasty eras (1368-1912), retain some of the traditional culture and way of life of the past.

Visiting the Beijing hutongs for shopping, dining, and experiencing the street life is a way to get in touch with the everyday people and experience the daily life of people in Beijing.

What Is a Hutong?

A hutong is a lane or alley formed by traditional courtyard compounds lining both sides. These hutongs range from little alleys 40 centimeters wide to streets 10 meters wide.

The compounds that line the lanes and alleys are called "siheyuan" (四合院 sìhéyuàn /srr-her-ywhen/). The word means: 'four joined-together courtyard.' They are old buildings arranged on four sides around a courtyard, and the buildings and the courtyard are enclosed by a wall.

The hutong streets and alleys crisscross with each other and meander in confusing ways. It is fun to walk around in them. See our Recommended Siheyuan Courtyards in Beijing.

An old style hutong of the past

The Mongolians captured the Beijing area in 1215, and in 1271 they started to build their Yuan Empire capital called Dadu (大都 Dàdū).

It was recorded that in the Yuan Empire a 36-meter-wide road was called a standard street, a 18-meter-wide one was a small street, and a 9-meter-wide lane was named a hutong (胡同 hùtōng /hoo-tong/ 'haphazardly together').

Perhaps the name describes the haphazard unplanned construction of many of the hutongs. The word hutong originates from the Mongolian word hottog that means 'water well' in Mongolian. In ancient times, villagers dug a well and then lived around it.

In the Ming (1368–1644) and Qing (1644–1912) empires, the officials and wealthy people built their grand siheyuan compounds close to the Forbidden City of the emperors along hutong lanes that were wide and laid out according to a plan. A good example is the Qiao Family Grand Courtyard. The commoners and poorer people, however, built smaller siheyuan around narrower lanes and alleys, laid out haphazardly on the outskirts of the capital city. See more on Hutong History.

Beijing's hutongs are not only its old network of roads. They represent an important stage in the development and evolution of the capital's history and culture.

The hutongs reflect the culture of the common people, while the Forbidden City, Summer Palace, and the Temple of Heaven are symbols of imperial culture.

Life in the Beijing Hutongs

Beijing's hutongs showcase the traditional daily life of ordinary people in Beijing and give a glimpse of old Beijing.

The narrow and compact hutongs stimulate deep and warm relationships among neighbors. The people meet, chat, eat, and play games such as mahjong in the lanes and public spaces.

Hundreds of residents in a hutong may share the same bathroom, so even while using bathrooms or bathing, they had to live with each other intimately.

The familiarity and closer relationships are what the hutong Beijinger's cherish, and many hope to stay there.

Beijing's hutongs have descriptive names. There were many ways to name a hutong, such as:

Top Beijing Hutongs You Must Visit

Of all the hutongs connecting the old traditional residential areas in Beijing, there are a handful or two of famous and interesting hutongs that stand out from the rest.

Learn more about the stories behind the hutongs on The Top 10 Hutongs in Beijing.

Top Things to Do in Beijing Hutongs

Beijing's hutongs are the best places to explore the quintessential Beijinger's life and find many authentic hidden delicacies.

This is a classic way to get an overview of the traditional hutongs in a short time and has been a must-do activity in Beijing for years.

Join a family in their typical Beijing home for lunch and learn about Chinese cooking and their health philosophies. Become an expert who can tell authentic Chinese cooking from dishes served by best-selling overseas Chinatown restaurants.

See The Top 6 Things to Do in the Hutongs.

Tips for Visiting Hutongs in Beijing

Though the hutongs are public areas and better signposted, there are some things you should pay attention to when visiting…

In the hutongs, you will mostly see common people's courtyard houses. Sightseeing outside is welcome, but do not enter without the owners' permission (many open doors lead to their courtyards).

Plan your time and route well: it is easy to lose track of time and your way in the winding alleys.

Tour Beijing's Hutongs with Us

Beijing's hutongs are the carrier of Beijing culture. They are a window on the real Beijing. A local guide will give you more insight into the hutongs' culture and history.

All our tours can be customized according to your needs. Contact us for any inquiries.