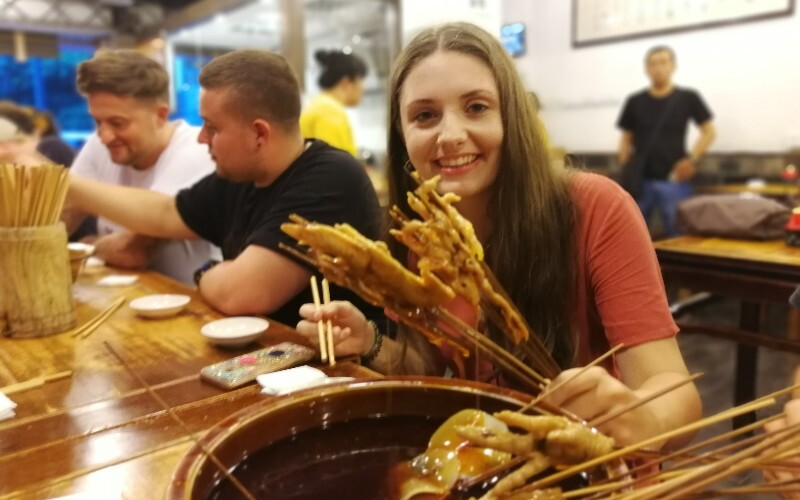 Chengdu is China’s food city where the locals and tourists spend much time eating and sampling the abundant street food and snacks. People come from around China and around the world aiming to enjoy the local food. The city is known for the spicy and pungent Sichuan-style cuisine.

Common snacks in Chengdu include noodles, wontons, dumplings, pastries, tangyuan (sweet rice balls), salads and soups. You’ll find these snacks sold in kiosks and restaurants along the street and in market areas both for sit in and take out. Though you’ll also find these dishes served in more expensive restaurants too, this is the kind of food that people can order and eat quickly or take with them in paper bowls or in hand. Here are 10 common snacks that you'll enjoy in Chengdu.

Tianshui mian (甜水面) means 'sweet water noodles'. It is a typical snack of Sichuan cuisine. It is a sweet dish made with thick hand-made wheat noodles, sugar, sauce and a little meat or condiments for flavoring. They add red chili oil, so it stings the way that local love. They love this sweet and hot kind of snack.

The noodles are made of wheat flour and salt. The resulting noodles are chopped thickly. The sauce isn't red like most Sichuan foods are, but dark or brown. They make various varieties of it by mixing soy sauce with roasted sesame paste, black peppercorn, and brown sugar or white sugar. Along with perhaps cassia cinnamon and some bay leaves, they concoct a spicy dark, slightly bitter and hot sauce that is a contrast to the common red-hot dishes.

Most restaurants and snack kiosks will allow you, even encourage you, to add your choice of spices and toppings. Little bowls of condiments are laid out for the customers to use liberally.

Liangfen (凉粉 liángfěn 'cool rice noodles') is another well-known representative of Sichuan street snacks nowadays. There are several varieties of it. Some liangfen swim in red chili oil soup that might have sesame oil. Some herbs such as cilantro are generally added to taste. In Chengdu, they make the thick translucent noodles from pea starch, sweet potato starch or mung bean starch, so there are three common varieties to try.

Each restaurant and stall has its own special homemade sauce, but besides chili oil and a generous portion of chili flakes or powder, they'll generally add garlic, salt, and other spices. In many restaurants, you can add extra herbs and spices to your noodles as you like it.

The spicy hot noodles make a good contrast to the sweet wheat noodles, and you’ll usually find the sweet noodle dishes sold by the same restaurants or adjacent restaurants or kiosks. In addition to the red chili sauce variety, another variety of liangfen is made with bean paste sauce. The locals think liangfen helps them to adapt to high temperatures of the Chengdu summer days.

Dumplings (水饺) are a common food all across China, but the Chengdu people like them with a spicy flair. While the first two noodle dishes are local specialties that are not commonly eaten in other parts of China or overseas, most tourists in China will be familiar with dumplings. Dumplings of many varieties are sold everywhere along street stalls and in street-food and takeout restaurants.

Dumplings usually have pork fillings, and you can either order regular dumplings in a dish with sauce or dumpling soups.

The red chili oil dumplings taste spicy and salty. It is the most common type of dumplings. The red oil dumplings are made with chili oil, ground or cut up chili pepper, and perhaps sesame oil.

The soup dumplings have a light and delicate taste; delicious soup with the dumplings makes you feel healthy, and it's easy for your stomach to digest. Elderly Chinese people usually don't prefer red chili oil, so they prefer the dumpling soups.

Mapo tofu (麻婆豆腐 /maa-por doh-foo/) features tofu served in a chili-and-bean-based sauce and topped with minced meat such as pork or beef.

The taste of Mapo tofu is fittingly described as numbing, spicy-hot, fresh, tender, soft, aromatic and flaky. Mapo tofu is not exclusive to Sichuan Province. You'll find it in other provinces too.

Learn more on How to Cook Mapo Beancurd.

Kung Pao Chicken can be made burning hot or bland.

The dish is prepared by frying diced chicken and dry red pepper with golden peanuts. Spicy diced chicken is more popular among Westerners than mapo tofu.

When you're in a restaurant, you can order the dish with less spice. Otherwise, you might find yourself primarily eating red chili pepper with bits of chicken and peanuts. Learn How to Cook Kung Pao Chicken.

Longchaoshou (龙抄手 lóngchāoshǒu 'dragon fried hands') are what Sichuanese people call wontons. Wonton soup is common in Chinese restaurants overseas, so you’ll recognize it in Chengdu, but maybe you've never had any as delicious as Sichuan's wontons since these are made not in factories but often carefully by hand in the restaurants and made with authentic natural ingredients.

Longchaoshou's main features are thin skins made of wheat flour, stuffing and a tasty soup. The wonton skins are slowly rubbed and rolled to be translucent skins that are said to be "thin as paper, fine as silk." The soup is made from boiling chicken, duck, or parts of pigs, and they deem it ready after being slowly simmered and stewed to make it creamy. See more about How to Cook Wontons.

Baozis are a common Chinese snack, but Korean baozis are made specially in Chengdu.

Korean steamed buns (韩包子) have over 80 years of history. In 1914, Han Yulong (韩玉隆) opened a "Yulong Park Noodle Shop" in the south end of Gold Street. They were popular.

They use fine white powder, pork grease, sugar and flour to make the skin of the steamed buns. They insert various fillings such as fresh meat, fat, spices and sauces. Then they steam it as shown in the picture.

Dandan noodles are a common fast food in Chengdu.

Dandan noodles (担担面, dàndànmiàn /dan-dan-myen/) are thin, long noodles topped with a sauce made of preserved vegetables such as mustard stems, chili oil, fresh chili, Sichuan peppercorns, minced pork, and scallions. Sometimes there is also sesame paste in the mixture.

Dandan noodles are a famous Chengdu snack. Rolling the flour to make the noodles, boiling them until they are cooked, and scooping minced pork onto the noodles is how they make them. The noodles are thin, and the sauce is flavorsome. Tasting a little bit salty and spicy, people still think it is very delicious. Dandan noodles are widely served in Sichuan restaurants and are often served as a banquet dessert.

There are various varieties, but Chengduers often prefer a flavorful combustion of nutty, spicy, and smoky with lots of red chili oil as in the picture.

According to legend, early in the 20th century in a small town near Chengdu, a man called Zhao Hanhua (郭朝华) and his wife trundled around carts in the streets with vinegared cattle lung slices. The dish was so popular that locals started calling it a special name: 'Husband and Wife Lung Slices'.

Guokui (锅魁 /gwor-kway/ 'wok outstanding') is to the liking of many foreigners since it is somewhat reminiscent of pancakes, crepes, or sandwiches. Guokuis are also a handy kind of food for take-out or for buying and eating at street stalls. It can be served quickly, and you can eat it as you walk.

There are actually two kinds of guokui. One kind is a baked meat pie. There are various fillings, and red chili and black peppercorn add the characteristic spiciness. There are hundreds of small open to the street restaurants and street stands selling these. It makes for a ready snack.

The other kind of guokui is like a pita bread sandwich. It is bread filled with meat and/or other fillings. There are sweet varieties kind of like a dessert and hot varieties. This kind of guokui is less oily. You'll have many choices of these guo kui to choose from when you come to Chengdu. You might also find or be able to order vegetarian guokui like a salad in a bread.

Good Places to Taste These Snacks

1. Chunxi Road (春熙路) is located in Jinjiang District, Chengdu. It is a prosperous and time-honored commercial street in the downtown area of Chengdu. A large variety of delicious snacks are available in Chunxi Road including a number of famous snacks of time-honored Chinese dishes such as Zhong Dumplings, Pork Lungs in Chili Sauce, Korean Steamed Buns, Long Chao Shou, Dandan Noodles and Clear Noodles in Chili Sauce.

2. Jinli Snack Street (锦里小吃街) is now the most famous snack street in Chengdu. It is located near Wuhou Temple (武侯祠). There are various Sichuan snacks available in the street.

3. Kuan-zhai Lane" (宽窄巷子) is located to the west of and a little to the north of Tianfu Square. It is just a block north-west of the People's Park. It is a great place for relaxing and dining with lots of (expensive) tea houses, restaurants and local snacks.

Enjoy Chengdu's Street Food while You Tour the Highlights with Us

Start a food adventure with us...

Dumplings, wontons, jelly noodles, and a great variety of hundreds of kinds of desserts and snacks not mentioned on this street food page are waiting for you to try them.

So are fine Sichuan restaurants where we can introduce you to your favorite meals whether it is Chengdu hotpot or gourmet several course meals.

Allow our local guides to help you discover the culture of Chengdu’s cuisine in a One-Day Chengdu Food Tour. Alternatively, you can use our Create My Trip service to tailor-make a unique tour.

Chengdu not only has beautiful natural scenery but also spectacular historical sites. And if you are planning a trip to Chengdu, we can combine going to your favorite kind of restaurants for meals with our recommended Chengdu tours such as:

All our tours can be customized.

Create My Trip: Contact us to receive a free quotation for a tailor-made tour - just tell us your requirements and interests.