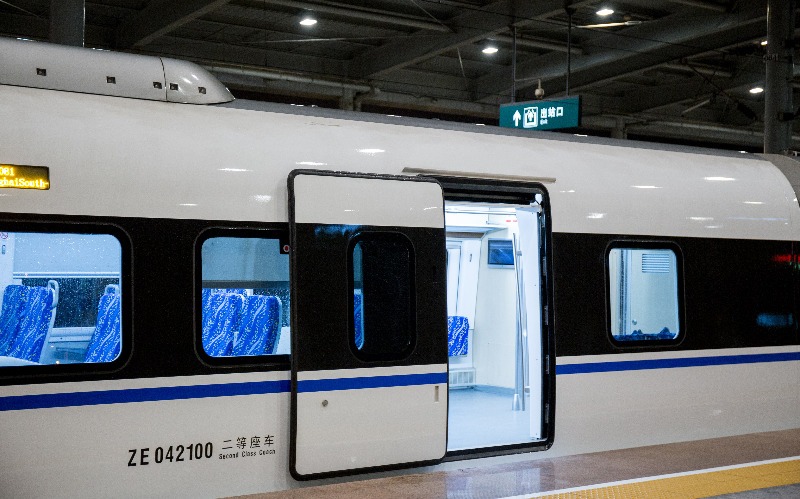 Traveling by train in China is one of the cheapest ways to travel some of the long distances in China and is used widely by the local population. It is important to know what to expect if you decide to travel by train in China. The information below might be helpful when you book train tickets in China.

In China, train numbers are usually indicated with a capital letter followed by several numerals. The letter indentifies the category of the train, which is often determined by speed and the number of stops the train will make during the journey. The better categories accordingly represent the higher level of price, speed, service, facilities and cleanness, and fewer number of stops along the way. The common used letters (categories) are as follows:

The prefix letter "G" is pronounced as "Gaosu" in Chinese, meaning high-speed EMU trains. G trains are the fastest and most advanced trains in China, with a designed top speed of 300 km/h (186 mph). They use both Hexie (CRH series) and the Fuxing (CR series) including CRH3C, CRH380 and CR400. CR400 trains are also known as the higher-speed EMU trains "Fuxing Hao", with the designed speed of 350 km/h (217 mph).

G trains' coaches are modern and air-conditioned. Business-class/superior-class seats, first-class seats and second-class seats are available. Smoking is not allowed on high-speed trains.

The prefix letter "D" refers to "Dongche" in Chinese. D trains are the second fastest high-speed trains in China. Compared with G trains, D trains are operated at lower speeds between 200 km/h (124 mph) and 250 km/h (155 mph). D trains are normal EMU trains use CRH series. The ticket fares of D trains are lower than the fares of G trains.

D trains running during the daytime have first-class and second-class seats. While for some long-distance overnight D trains, such as Beijing – Shanghai and Beijing – Guangzhou, there are hard sleepers and soft sleepers available.

Z trains refer to "Zhida" trains in Chinese meaning non-stop express or direct express. They are the fastest normal-speed trains in China usually run at a speed from 120 km/h (74 mph) to 160 km/h (99 mph). Though its name implies "non-stop", some do have several stops along the way, but only at major stations. The Z trains usually serve main cities, such as Beijing, Shanghai, Xi’an, Wuhan, Shenzhen, as well as Hangzhou and Ningbo.

The coaches are air-conditioned. They are usually overnight trains, so there are usually sleepers (hard/soft) available. Some of them have superior soft sleepers, which are the ultimate luxurious sleeper type.

T trains (Pinyin: Tekuai 特快）are the second fastest normal-speed trains in China running at 140 km/h or 87 mph. They have limited number of stops along the way, at major cities or some junctions. All the major cities with railways can be reached by taking T trains. The coaches are air-conditioned. Both seats (hard/soft) and sleepers (hard/soft) are available.

K trains (Pinyin: Kuaisu 快速) run at 120 km/h or 74.6 mph, and stop at more stations than the T trains. Besides stopping at cities, they will also stop at main counties along the way. Both seats (hard/soft) and sleepers (hard/soft) are available. The coaches are not so modern and clean as those mentioned above, but they are still tolerable.

Digit-only trains have numbers of only four figures. They run at the lowest speed, stop at the most stations, and have the cheapest tickets. They also need to wait for giving ways to other trains during the journeys. So you need to spend the most time on the train if you choose a digit-only train. The digit-only trains can be divided into two categories:

Trains numbered between 1001 and 5998: 40% of these trains have air conditioners, and the rest only have electric fans. The trains stop at railway stations in country towns and cities.

Trains numbered between 6001 and 7598: These trains stop at every railway station along the way, including those in villages and small towns. The ticket prices are really cheap, but prepare for basic train conditions on the train (only electric fans are available).

It is the most luxurious and expensive class. There are three seats in a row (2+1), with sufficient elbow and leg room. The seats are leather covered, soft, comfortable, and can be reclined to a flat angle. A business class ticket is twice as a first class ticket, as triple as a second class ticket.

Business class is usually available on the first or last carriage on some G-category high-speed trains. They are separated from other carriages by an automatic door. It is a good choice if you want to have a quiet and private journey.

First class seats are available on bullet trains. Four seats are arranged for a row. The seats are similar to soft seats, but are wider, more modern and comfortable. Smoking is not allowed. First class offers more leg room and elbow room than second class. There is an automatic door separates first class coach with the others to keep quiet and privacy.

They are available on bullet trains. Five seats are arranged for a row. It is a level below the first class seats with relatively smaller sitting area, but is still comfortable. Second class ticket fare is the cheapeat on high-speed trains. Smoking is not allowed.

There are six kinds of general tickets available. China Highlights recommends booking a soft sleeper or a hard sleeper. The hard seat and no-seat tickets are in compartments that are so crowded that even a short trip may be very uncomfortable. The compartments may be packed with people standing or sitting in the aisles. Also, foreigners may find it difficult to get a hard seat or a no-seat ticket since the ticket sellers may not issue these to foreigners. The best choices are soft sleeper or hard sleeper.

It is the top level sleeper, and the fare is much more expensive than that of soft sleepers. It is only available in a few trains. Each enclosed compartment contains only two clean and comfortable bunks (upper/lower), a western washroom, and sometimes even has a shower cubicle. The ground is carpeted, and other facilities include sofa, LCD TV, table and wardrobe.

It is sort of a luxurious train travel, with the fare almost twice as much as that of the hard sleeper, and sometimes even as much as that of discounted flights. Each compartment is enclosed by a door, and contains four bunks, with two to a side. The bunks are wider and more comfortable, and there is an LCD TV for each bunk. Air-conditioning is available, and the washroom is clean. Smoking is not permitted in the coach, but you can smoke at the corridor between cars. It is advisable to buy soft-sleeper tickets for overnight and long-distance travel.

It is the basic accommodation for overnight or long-distance train travel. The coach has doorless compartments, in which six bunks are arranged, with three tiers of bunks (upper/middle/lower) on both sides. The bunk beds are stacked three high. The top bed may be difficult for you to get onto. There is a small difference of price between the bunks, with the upper bunk being the cheapest and the lower bunk the most expensive. A pillow and a sheet are provided for each bunk. There is a small TV hanging in each compartment. Air conditioning is available, and the washroom is tolerably clean. Smoking is not permitted in the coach, but you can smoke at the corridor between cars.

It is one level above the hard seat, and the fare is slightly higher. The seats are relatively cleaner and more comfortable. There will be no over-crowding in soft-seat coaches. In some trains air-conditioning is available. Smoking is not allowed in the coach, but you can smoke at the corridor between cars. These are the most expensive tickets and often almost the same price as a hi-speed train ticket, but these are often available when the other regular tickets are sold out. These will probably always sell out during the Spring Festival. There are closed compartments with four beds per compartment. Soft seats are ok for several hours’ ride.

It is the cheapest option and the most common kind of tickets, and the coaches are usually overcrowded. Though the seats are actually thinly padded, you could hardly sleep on the upright seats. Smoking is permitted here so there is no air-conditioning. The coaches are not clean, and you would never want to visit the toilet. It is usually not advised to buy hard-seat tickets when there are other options available. They are very uncomfortable for overnight trips. During the Spring Festival travel peak, the compartments are generally overcrowded, noisy and maybe stinky. There are frequent thefts of baggage.

If you can’t get any other ticket, you may be issued a “no-seat” ticket. These are generally cheap. Even long-distance journeys may cost less than 200 RMB or less than 30 USD. However, the crush of people jostling for standing and sitting space is terrible. Sometimes people even get violent. You can purchase small stools or sit on your luggage.