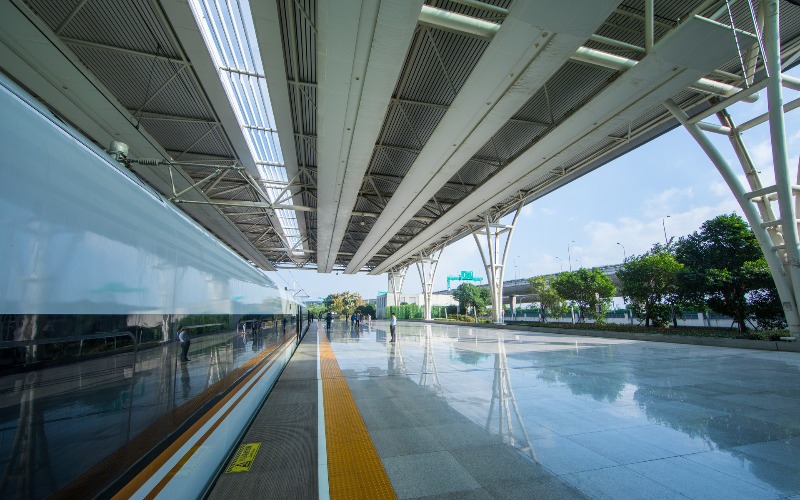 China high-speed trains, also known as bullet trains, have a running speed of 200 to 350 kph (124 to 217 mph). They are popular for their punctuality, comfort and safety, and they are the most convenient way of traveling around China.

China high-speed trains can be categorized into three types: G, D and C-category trains, with different running speeds. The appearance and facilities inside of G, D and C trains are similar, all modern and well-maintained.

A valid identification document is required when buying a ticket and boarding a train in China.

Buying China train tickets online with travel agencies like China Highlights is the most convenient. China Highlights make train ticket online booking available to you to save you time, inconvenience, and money. All inquiries will be handled by China Highlights' experienced travel advisers to ensure you get the best service. Our ticket delivery service will save you a lot of time and hassle.

Search for the tickets that you want to buy at China Highlights Train Ticket Service. Or download our China Train App for a more convenient service on your cell phone.

Types of High-Speed Train in China

China High-speed trains are designed for speeds of 200 to 350 kph (124 to 217 mph). There are three types of high-speed trains in China: G, D, or C trains. The facilities and appearance of G/D/C trains are similar and they are all well-maintained and modern. The bullet-shaped trains are white.

This category of train has a speed of over 300 kph (186 mph). The trains only stop at a few major stations along the way, and the ticket price is the highest among the trains. There are no sleeper cars on G trains.

D trains are the second fastest and are designed with a speed of over 200 kph (124 mph). This type of train is mainly used on the popular rail lines connecting major cities. Some overnight D trains have soft sleeper class.

C trains are only run between a few neighboring cities, like Beijing–Tianjin, Changchun–Jilin, Guangzhou–Zhuhai/Shenzhen, and Guiyang–Kaiyang. Journeys are short and sleeping cars are not provided.

China has developed a new type of bullet train – “Fuxinghao” high-speed train. It is now the fastest train in the world. “Fuxinghao” made its first appearance on June 26th, 2017. Currently, these newest high-speed trains are G1/G2、G3/G4、G5/G6、G7/G8、G9/G10、G13/G14、G17/G18, running on the line between Beijing and Shanghai. And "Fuxinghao" has covered more and more rail lines between major cities such as Nanjing, Wenzhou, Hangzhou and Huzhou, etc.

Compared to the old type of high-speed train “Hexiehao”, “Fuxinghao” is faster, safer and more comfortable.

Facilities on a China High-Speed Train

Generally there are four kinds of seat classes:

Business class is the most luxurious on China high-speed trains, and the price is the highest. It is spacious, with two meters (6.6 feet) of space between the rows. Seats are arranged as A+F for the first row, and AC+F for the other rows. The comfortable leathered seats can be electrically reclined to a flat position so that you can lie down completely.

Superior class is only available on certain high-speed trains in China. Each carriage has 16 seats - eight seats at each end. It is in the best position for sightseeing. Each row has three seats, as found in a business class carriage.

First class is recommended for travelers who want to experience a comfortable journey on a high-speed train, and don't want to pay too much for it. The price is cheaper than business and superior class, and the seats are wider than second class seats. Each row has four seats.

Second class is the most common and cheapest ticket class for high-speed trains. It's a good choice if you are planning a low budget China tour.

See more tips about How to Choose between Train Types and Seat Classes in China.

Soft sleepers and deluxe soft sleepers are available on some overnight D trains, such as Beijing – Shanghai and Shanghai – Xi’an.

The maximum carry-on baggage allowance for each passenger is 20 kg. The size may not exceed 60*35*35 cm (24*14*14 in), and the dimension should be less than 130 cm in total (51 in). The length of rod-shaped items cannot exceed 180 cm (71 in). Carry-on baggage in excess of the limit is subject to an excess baggage fee and must be carried on as checked baggage. See China train baggage allowance for more information.

Although China bullet trains have many advantages, there are some things you need to know before you decide to take one.

Second class seats may be too small for some passengers.

1. Seats may be too small for some passengers

If you have a large frame, you are recommended to take a first class seat. A second class seat is about 43 cm wide and it may be a bit too small to sit comfortably. Business class is the most comfortable type of seat but the price can sometimes be much more expensive than a flight ticket.

A conductor on a high-speed train.

Conductors on a high-speed train don't speak English. Therefore, it could be difficult when you need to order a meal or buy some snacks on a train. Those phrases may be helpful to you Top Chinese Phrases for China Train Travel.

4. Smoking is forbidden on all high-speed trains

1. High-speed trains in China only stop for a few minutes at each station. So don’t get off the train until you get to your destination.

2. High-speed trains in China usually depart from a remote train station in a city. So read your ticket carefully and make sure you go to the right station.

3. It might be noisy on the train during peak season, e.g. summer holiday, Chinese New Year and national holiday. Skip second class if you don’t like too much noise. It is quieter on first class, superior seat and business class.

4. It is a good idea to bring your own food on board, since the food on the train is expensive and limited in choice.

How many days in advance can I book China train tickets?

I cannot find a train for my route, what can I do?
Answer: Please call us or send us an email. Our experienced travel advisor may be able to help you find a solution.
Can you buy international train tickets?
Answer: Yes, we can buy international tickets on rail routes including Siberian rail routes (Beijing–Ulaabaatar, Beijing–Moscow and Ulaabaatar–Moscow, etc.), Beijing–Hanoi, Nanning–Hanoi, Beijing–Pyongyang and Urumqi to Almaty/Astana. Please search the train schedule and make a booking at China Highlights train ticket booking.
Can I book e-tickets for trains in China?
Answer: Currently, foreign passengers with passports have to use paper tickets for boarding.