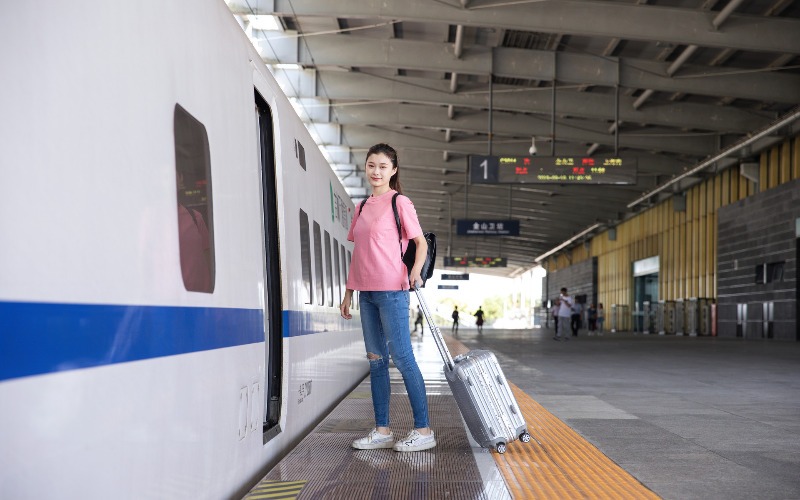 China's 10 Fastest Trains - World Records and Benefits for You

China's Beijing–Shanghai HSR holds the record for the fastest unmodified electric wheeled train, at a highest speed of 487 kph (303 mph), set in 2010 while not in commercial use.

This railway line has a north–south trend. Departing from Beijing, you will cross the two longest rivers in China - the Yellow River and the Yangtze River - then arrive in Shanghai.

2. Beijing–Shenzhen HSR - the Longest in the World

This train route is part of the longest high-speed railway network in the world. The Shenzhen to Hong Kong section is not open yet. It connects North China, Central China, and South China so the landscapes on the way change every hour.

Although 8 hours on a train is quite a long time, it's a good choice to save money on your China trip. It's also a special experience to take a train traveling more than 2,200 km (1,367 mi) in distance.

Shenzhen attractions: Window of the World, the second highest building in China (Ping An Finance Center)

Shanghai and Nanjing are two neighboring cities, and the journey duration is about 1 hour. Hangzhou and Suzhou are also within the 1-hour high-speed train route network. You can travel between these four cities conveniently.

Nanjing attractions: the Nanjing Massacre Memorial Hall, Nanjing City Wall (with a history of over 600 years)

This train mostly goes through hilly landscapes and the main feature of this train route is that there are many bridges.

This is the first high-speed railway line in Northeast China. It's convenient for passengers (from Japan and Korea) who are taking an international cruise at Dalian Port.

7. The Shanghai Maglev - Central Shanghai to Pudong Airport in 8 Minutes!

As the length of the Shanghai Maglev track is only 30 kilometers, the average speed of Shanghai Maglev trains is only 230 kph (143 mph). It's very convenient for passengers who need to catch a flight to Shanghai Pudong International Airport.

As the first magnetically levitated train service in the world, these trains don't have wheels! The construction began on March 1, 2001, and it was in service on January 4, 2003.

This high-speed railway is very popular for travelers in winter. People go to Harbin to enjoy the ice and snow world attraction, skiing, and the ice sculpture festival.

This train route is very convenient for travelers taking an international cruise at Tianjin Port. Compared to a bus journey, which takes about 2½ hours, a high-speed train is much more convenient.

If you want to enjoy a Shanghai tour and China's high-speed trains, please see the following tours for inspiration:

If you want to experience the Shanghai Maglev Train and adjust the itinerary, we can tailor-make it for you. We can help you arrange your tour according to your interests and requirements.