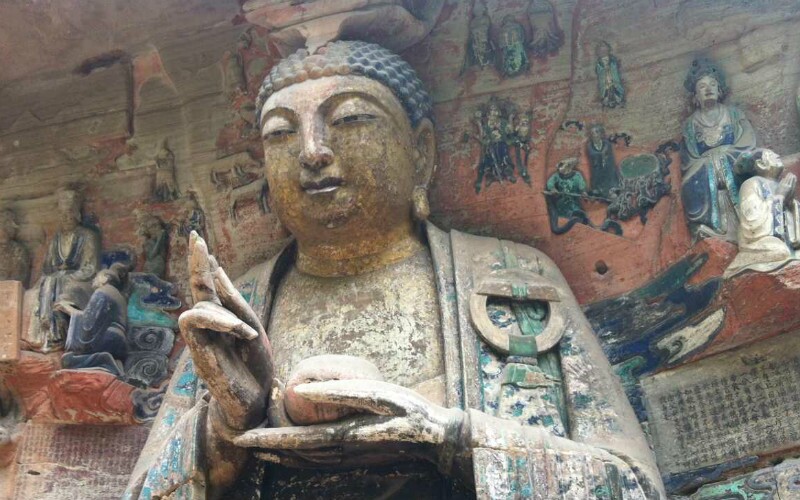 It's the most convenient to take a bus from Chongqing to Dazu. It just takes 2 hours to arrive there. There are tens of buses in the Chongqing West Bus Station.

The Dazu Rock Carving is a piece of great work of China's grotto art. It's not only rich in content but also carved with marvelous technique. It skillfully combines the scientific principles of mechanics, optics, and clairvoyance with statues themselves and landform. The Dazu Rock Carving is reputed as "Artistic Palace of the Tang and Song Dynasties".

The Dazu Rock Carving was firstly excavated at the beginning of the Yonghui time of the Tang Dynasty. Experiencing the late Tang Dynasty and the Five Dynasties, it was very popular in the Southern Song and Northern Song Dynasties (A.D.960-1278). In the Ming and Qing Dynasties, more statues were carved. Finally, a large rock-carving group, which gathered the pith of China's rock carvings, was formed. It's equally famous with the Yungang Grotto, the Longmen Grotto and the Duhuang Grotto. It's hailed as the "Magic Pearl of Oriental Art" home and abroad. Dazu is the home of rock carving, with more than 40 rock carvings and over 50,000 statues. Among them, two rock carvings, which are the most famous and on the biggest scale, are Baodingshan and Beishan. There are nearly 10,000 stone statues in Beishan. They mainly gather in Fowan, which is a U-shaped section of about 500 meters long and looks like a new moon. These rock carvings here were excavated in the Jingfu time of the Song Dynasty (A.D.892). They underwent the Five Dynasties, the Southern Song Dynasty and the Northern Song Dynasty. It has been built for 250 years. These statues are lifelike and excavated elaborately. The most wonderful statues are several statues of Guan Yin, Wen Shu and Pu Xian. The rock carvings in Baoshishan are rare in the grotto art in China.

Centered on Dafowan (Great Buddha Crescent), Baodingshan of Dazu Rock Carving has 13 scenic spots. Xiaofowan, Daota, Longtoushan, Shushishan, Huang po, are in the east; Gaoguanyin is in the south; Guangdashan, Fozhuyan are in the west; Yanwan, longtan, Duimianfo are in the north. The stone statues in Dafowan are on the largest scale and have the highest artistic value. They are kept in the best state. Dafowan is a horseshoe-shaped mountain. There are more than 10,000 small or large statues distributed in the 500-meter-long and 15-30-meter-high cliff. At the same time, there are some stone tablets recording the origin of Baodingshan and Buddhism. The statues in Dafowan are carved according to the landform. They are tall and magnificent with wide subjects and in rigorous design. Buddhist image is full of novel and unique conception, with skillful carving technique and rich color of folk custom. The content is mainly about the sutra stories. The main features "Six Recurrents", "Loving parents Buddhist Image", "Hail Buddhist Image", etc. are vivid and full of profound significance.

Beishan of Dazu Rock Carving was firstly excavated in the first year (A.D. 892) of the Jingfu reign of the Tang dynasty. After the Five Dynasties and the Southern and Northern Song Dynasties, nearly 10,000 statues were built in Fowan, Yingpanpo, Guanyinpo, Northern Tower Temple, Fo'er cliff, etc. The statues in Fowan are the most concentrated. There are 290 small caves in the cliff. In the 300-meter-long and 7-meter high cliff, there are 6 stone tablets, 55 inscriptions, 8 stone pillars engraved Buddhist classics, one piece of "Wenshu Treating Patients" picture in intaglio, 264 niches of stone statues. The Buddha images in Fowan are engraved carefully and complicatedly, with pretty and easy posture and in special style. The statue of Puxian Buddha in Xinshenche Grotto is fine, which is hailed as "Oriental Venus". Rotating Wheel Storing Buddhist Classics Grotto is called "the palace of stone statues". Weijunjing Tablet, Caijing Tablet and Old Wenxiao Tablet exist in the world solely. Not only they are the treasures of handwriting, but also they offset the vacancy of historical materials. They have very high value. Stone statues in Fowan are divided into the south region and north region. Most statues in the south region are the works of the late Tang dynasty and Five dynasties. Most statues in the north region are the works of the Southern and Northern Song dynasties. The features of the works of the late Tang dynasty are full and dignified. They are engraved in flowing line, with simple and honest temperaments and simple attire. The works of the Five dynasties are exquisite and colorful. The attires are from the simple to the complex. They get rid of the influence of foreign culture, and have the characteristics of the stone statue's transition period. The works of the Southern and Northern Song dynasties have outstanding national characteristics.