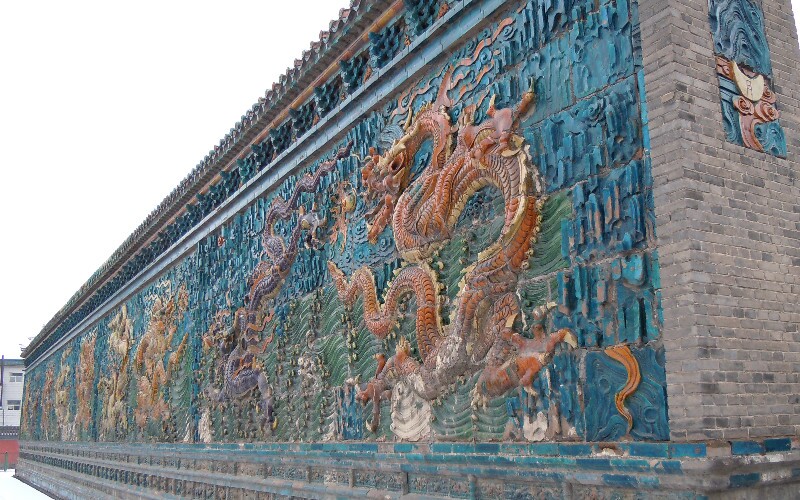 As one of three famous walls of this style in China (the other two are in Beihai Park in Beijing and in front of Taiji Gate of the Forbidden City in Beijing), Datong Nine-Dragon Wall is the oldest, largest and the most enchanting one among the three.

Built during the Ming Dynasty (1271-1368), this marvelous wall is 45.5 meters long, 8 meters high and 22 meters thick. Nine dragons, each playing with a pearl with the sun and moon aside, were carved in a very lifelike manner. Yellow, blue, purple and white are applied to the carvings to depict the writhing dragons, and make the wall very enchanting. Among the nine dragons, one heading to the front with imposing appearance is held in awe by other dragons. The left space is filled with patterns of mountains, rivers and trees, which serve as a contrast to make the dragons stand out. The whole wall was built on a 2.09-meter sumeru throne (须弥座), on which carved 41 patterns of "two dragons playing with a pearl".

In addition, on the waist of the sumeru throne, 75 pieces of vitreous brick constitute a grand relief with varieties of lively animals on it, such as cattle, horses, sheep, dogs, deer and rabbits. The wall reflects the superb carving skill of ancient China.

Besides, tourists can find many streets, gates, and places with imperial names in Datong, like "Huangchen Street (the Imperial City Street)", "Zhengdian Street (The Main Hall Street)", "Donghua Gate (East China Gate)" and so on. They are all ruins of imperial palaces in ancient China.