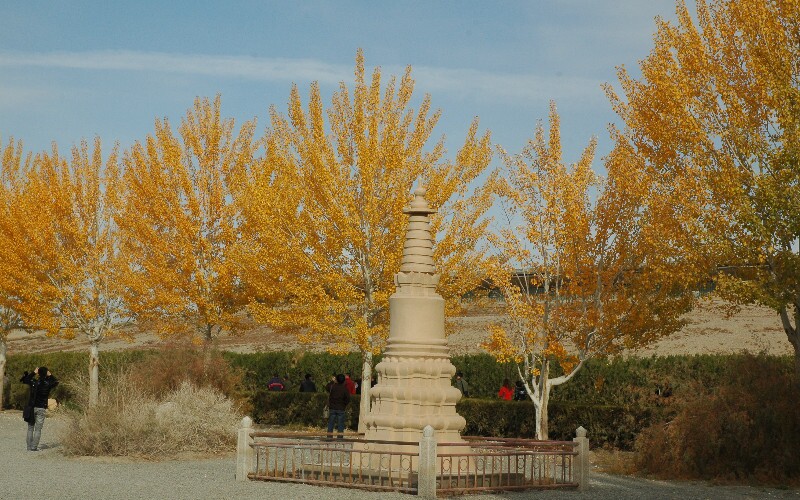 Situated in Baimata Village, 2 kilometers (1.2 miles) to the south-west of Dunhuang, Gansu Province, with the Dang River to the east, White Horse Pagoda has a long history of over 1,500 years. It was built to commemorate the white horse of the eminent and learned monk, Kumarajiva (344-413), hence its name.

The magnificent nine-storied White Horse Pagoda was made of earth bricks inside and painted with limes outside, tapering off from the bottom to the top. It is 12 meters (39 feet) tall with a diameter of 7 meters (23 feet) and has an octagonal brick-structured pedestal that's 3 meters (10 feet) wide on each side.

Seen from the outside, the second, third and fourth stories are of the same shape, and the fifth one is adorned by white hobnail-shaped dots and lotus-shaped patterns outside. The sixth story is in the shape of an inverted alms bowl, the seventh one is dharma wheel-shaped, the eighth one is hexagonal with a wind bell on each side, and the ninth one is actually a spire. White Horse Pagoda is of a traditional Islamic style from the Ming Dynasty (1368-1644).

On the second story of the pagoda, two inscribed tablets are well-retained. The stone tablet reads "Renovated by Bai Wencai in the Emperor Daoguang Period of the Qing Dynasty (1644-1911)", and the wooden one reads "Renovated by Zhu Wenzhen and Lv Zhong in August of the 23rd year of the Republic of China (1911-1949)". White Horse Pagoda has also been repaired by Dunhuang City's government in recent years and has become a highlight of traveling to Dunhuang.

The legend went that the Emperor of the State of Qianqin (350-394), Fu Jian (338-385), ordered his generals, Jiang Fei and Lv Guang, to crusade against Qiuci (presently Kuqa County of Xinjiang Province) in November of 382. Prior to departure, Fu Jian said: "I've heard that Kumarajiva of Kuqa, a great master of Buddhism, excels in explaining aspects of matters including Yin-Yang, whom I admire so much, and you two should send him to me immediately if you capture Kuqa".

Lv Guang captured Kuqa and 30 other kingdoms in the Western Region in 384, and appealed to Kumarajiva to go the east with him to preach Buddhism, and Kumarajiva accepted his offer. After they arrived at Dunhuang, Kumarajiva dreamed of his white horse, and it said to him: "I'm the dragon horse in Heaven and have been sent by Sakyamuni to carry you to the east; however, I’m destined to die here in order to become an immortal, so you take care". Kumarajiva found his white horse dead after waking, and buried it in Dunhuang. The locals built the White Horse Pagoda in memory of it.