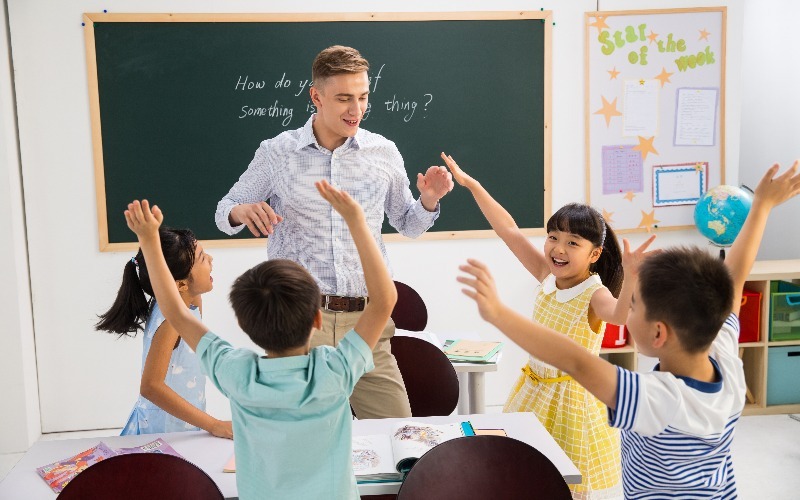 Being a Foreign Teacher in China: Expat Guide

Being a foreign teacher in China is still the most popular, and for most the easiest, form of work in China. It remains a great way to broaden your horizons and experience this vast and exotic land in the medium term while earning instead of forking out student fees (and it's a visa option still open during the pandemic unlike foreign student visas).

This article deals with teaching in Chinese Mainland. Teaching in Hong Kong (or Macau or even Taiwan) would be another article, as the system, the rules, working conditions, pay, etc. are all very different — in many respects still more British (or liberal at least) than "Chinese".

Types of Teaching Jobs in China

The majority of foreign teachers in China teach English, even for some if it is not their first language, though this is far less common that it was. There are some who teach other languages. Learning European languages is becoming more popular and there are a few native Japanese and Korean teachers, mainly at universities or specialist private schools. There are also a small minority who teach aspects of (foreign) culture or technical specialisms, though these types of teaching jobs are few and far between.

There are different types of English teacher in China…

In the state system there is everything available from nursery teacher (kindergarten, pre-school), primary school (elementary), and secondary school teacher (mostly lower middle school, as upper middle school teaching is more focused on passing university entrance exams than learning native English from a foreigner) to university teaching jobs (where classes can be an English major, which usually leads to a career in teaching English, or Translation, or maybe the Business English part of a Business degree).

See more on Education in China >>>

A foreign English teacher is teaching at an international school in China.

In the private sector, foreign English teachers teach this full range of age groups (sometimes in one school) as well as older students taking private classes. Private tuition usually involves smaller classes, sometimes even one-on-one, and higher wages. Work Visa, TESOL, and other requirements may have been skirted a decade ago in the private sector, but especially in the late 2010s, the private sector is becoming as rigorously regulated as the public sector.

Foreign teachers are regarded as a temporary asset or a way of attracting students or showing off prestige and never really become part of the staff community in Chinese/state-run establishments. This is especially true if they don't speak Chinese. Most are seen as short-term employees, and few stay beyond 2 years. Teaching English in China, especially in a school/university setting, is usually done as a gap filler between higher education and a career.

A career in teaching in China is often longer and more fulfilling at a private school, especially if it is foreigner-run. However, during the pandemic years, many foreign language schools have gone bankrupt or been forced to close due to lack of business or tightening rules and regulations.

Bending of the rules for foreign teachers was rife in China, but has been tightened up on like a vice alongside China's many other crackdowns on corruption from the late 2010s.

There are stories of illegal hiring by schools bending/flouting the rules, some of which con teachers out of up-front ‘recruitment fees' and hold back pay to make a profit from foreigners before they are deported. But there are also stories of teachers abusing their trusted position, living wildly, harming society, or providing a poor quality of education.

As in any workplace in China, politics and religion are no-go areas, whether in the classroom or informally with students or Chinese staff members. Anything that could be deemed as defaming/criticizing the government or preaching/spreading any form of religion could be a firing offence now. In the past (as late as the early 00s), teachers and students might have more openly shared their views about China's system and events and personal beliefs and standpoints, while treading carefully, but now such things are increasingly reported on and penalized.

Teachers in China now must have:

Teaching experience is helpful to be a foreign English teacher in China.

Teachers in China now must NOT have:

New tighter rules issued (or freshly enforced) from 2017, include the right (requirement) to sack teachers who break the law (with particular reference to drug, sexual, and religious offences) or who teach or promote in non-acceptable material in class (faith or "freedoms" — basically anything that contradicts the Party line).

Retirement age is 60 for men and 55 for women. No state school or any regulated company will/can employ a foreign teacher beyond the year they turn 59 or 54 (for men/women respectively).

No moonlighting: private tutoring or another job outside your visa allowance is illegal!

Numbers of Foreign Teachers in China

Foreign teacher numbers have steadily increased over the years in China, but then been decimated by the pandemic, visa restrictions, and crackdowns. Many private schools have shut and there has been a big move to online teaching, where one-to-one teaching with a "native English" speaker can be bought for as little as US$10 an hour, which is a great deal where in-person tutoring in China costs CN¥200–400 (US$30–60) an hour.

2021 legislation, however, banned online teachers outside China from teaching children, which has left online schools with the adult Chinese market and pushed the market for online tutoring of pre-18s underground. Similar July 2020 laws banned out-of-kindergarten tutoring of under 6's online or in person.

An anti-foreign and particularly anti-American sentiment due to trade wars and other political tensions has also contributed to a reduced demand for foreign teachers. Learning English has been given a lower priority in China's education system in the most recent years, in line with a more insular economic approach. However, English remains one of the main subjects taught from elementary (even kindergarten) level to university, so there is still a high demand for foreign teachers.

Foreign teachers are generally much better paid that their Chinese colleagues, but this is understandable as they are "essential commodities", especially at private language schools, many of which are now closing due to government crackdowns on unregistered schools or underqualified foreign teachers. Also living costs for anyone coming in from abroad are greater: airfares and other travel expenses, communication with home, imported food, etc.

This is just a rough idea as salaries vary greatly with the China city's "price band", with tier 2 cities (Beijing/Shanghai/Shenzhen…) often paying twice as much tier 3 cities (Xi'an, Guilin…) or tier 4 cities (Chengdu, Harbin…). (Establishments in Hong Kong, on the top tier, may pay twice as much again.)

Teachers from abroad also are required to work fewer hours than Chinese teachers, however this also makes sense with the extra time needed to do most things in a very different country. The standard 16 hours of lessons (minimum requirement for a full-time position) for a foreign teacher is not usually exceeded by much. Chinese teachers have much more in the way of reporting, office work, parental communication, etc. to do, as well as full days of teaching and marking, and even homework supervision in the evenings in middle schools!

The foreign teacher is working.

School holidays are in two long periods in China, and amount to about 13 weeks (i.e. 3 months), which is less than in the U.S. and similar to the UK's, but they are spread over multiple shorter holidays.

Teachers are generally only paid for the term-time months, not the vacation months, unless working in year-round education centers. Summer schools have been discouraged in recent years and taking another job is illegal, so the long holidays — more than ever — have become downtime and travel opportunities for foreign teachers.  Teachers enjoy the Chinese public holidays as well.

Accommodation often comes with the job. This is almost a certainty for middle school and university teachers.

If your school/university does not provide you with accommodation, or you would prefer to find your own, you may want to see Renting an Apartment in China: An Expat Guide.

If you teach in China, your school/university will help to arrange a work (Z) visa for you and ‘visitor' (L) visas for your spouse and children. These are usually for a year at a time.

Other perks may include free tuition at an international school for a foreign teacher's children (especially if the teacher working at the school or one that is affiliated — often universities have affiliated middle and primary schools).

China Highlights Is Here to Help

Would you like some help with life in China or traveling around? You may want to seek help from a company who have been serving foreign/expat travelers in China for over two decades. Contact us.

Would you like to organize a trip for your students or staff? Our partner program works with schools (state and private) to provide trips tailored to each school's educational and extra-curricular requirements.

Want a break from the stress or to discover more of China's highlights? See our tours designed for expats.