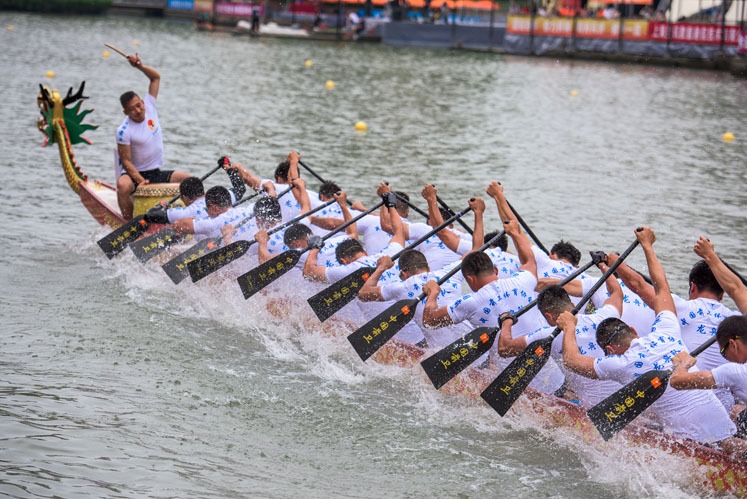 Apart from racing dragon boats and eating zongzi, there are many other interesting traditions and activities on the day of the Dragon Boat Festival or Duanwu Jie. Some are still widely practiced in rural areas, but some are not.

The most popular activity of the Dragon Boat Festival is racing dragon boats. This folk custom has been held for more than 2,000 years throughout southern China, and now it has become an international sport.

The origin of the festival is said to be when locals paddled out on boats to scare the fish away and retrieve Qu Yuan's body (the patriotic poet who drowned himself in the Miluo River when the Chu State fell in 278 BC). See the story behind the Dragon Boat Festival.

During the race, dragon boat teams paddle harmoniously at a pace that is set by the drummer and do their best to win the race through their synchronized efforts. It is said that the winning team will have good luck and a happy life in the following year.

It is an important tradition for the Chinese to eat zongzi (traditional Chinese sticky rice dumplings, each wrapped in bamboo leaves) during the Dragon Boat Festival.

The reason why the Chinese eat zongzi at the festival has many explanations. A popular origin story is again about Qu Yuan. After the great poet Qu Yuan drowned himself in the river, people scattered rice into the water to feed the fish, to prevent them from eating Qu Yuan's body.

Zongzi are made differently in different areas of China. People in the north enjoy zongzi with dates, while people in the south prefer mixed ingredients, such as meat, sausages, and eggs. This custom is not only very popular in China, it is also practiced in Korea, Japan, and other countries in Southeast Asia.

3. Hanging Calamus and Wormwood on Doors

Because of their special fragrances, people often hang calamus and wormwood leaves on their doors and windows on the day of the Dragon Boat Festival to repel insects, flies, fleas, and moths. Since the shape of calamus leaves is sword-like, hanging the plant is also believed to dispel evil and bring health to the family, especially children.

Chinese people, especially children, made incense bags and hung them on their necks to avoid catching contagious diseases and to keep evil spirits away at this inauspicious time.

Realgar wine or xionghuang wine is a Chinese alcoholic drink that is made from Chinese yellow wine dosed with powdered realgar. Realgar is a traditional Chinese medicine.

In ancient times, people believed that realgar was an antidote for all poisons, and effective for killing insects and driving away evil spirits. At Duanwu Festival, people would drink realgar wine to drive evil things away and to promote a healthy life.

Parents would paint a Chinese character ‘王’ (wang, literally meaning ‘king’) using realgar wine. ‘王’ looks like the four stripes on a tiger’s forehead. In Chinese culture, the tiger represents the masculine principle in nature and is the king of all the animals.

This activity is believed to drive poisonous creatures away and keep away diseases and evil things. As well as the forehead, realgar wine is also smeared on the nose, ears, or other parts of the body.

In some regions of China, on the day of the Dragon Boat Festival, parents braid silk threads of five colors and put them on their children's wrists. The five colors — green, red, white, black, and yellow — were lucky colors in ancient China. People believed that this would help keep bad spirits and diseases away.

Other traditional activities include hanging up icons of Zhong Kui (a mythic guardian figure), bathing in herbal waters, making an egg stand at noon, boiling garlic, and more. All of these activities are believed to keep disease or evil away, while promoting health and well-being.

Influenced by Chinese culture, South Korea, Japan and other countries in Southeast Asia developed their own versions of the Dragon Boat Festival, along with some unique customs.

In South Korea, Gangneung Danoje Festival is another version of the Dragon Boat Festival. It is a month-long festival and a variety of folk activities and events are held, such as brewing sacred liquor, sacrificing to their ancestors, making Dano (Duanwu) fans, swinging on swings, performing traditional mask dances, and washing hair in sweet flag water.

The Japanese version of Double Fifth Festival is called Tango no sekku.

Sweet flag is an important part of the festival. It is a herb and is regarded as a symbol of bravery in Japanese culture. During the festival, people hang it from their eaves, lay it on roofs, put it under pillows, bathe in sweet flag water, and drink sweet flag wine. People believe this can help chase away plagues and evil spirits.

During the Dragon Boat Festival, Vietnamese people prepare glutinous rice with a blend of spices to thank their ancestors and pray for a good harvest. They eat this glutinous rice and drink realgar wine to help prevent plagues. Children wear a lucky charm weaved out of colorful silk threads (like activity 7 above).

On the day of the Dragon Boat Festival, many Chinese families in the USA will make zongzi. There are also various zongzi on sale in supermarkets. Besides, dragon boat races have become popular cultural events in the USA. Los Angeles, San Francisco, Boston, New York, Denver, and other cities hold large-scale dragon boat races regularly.

Dragon Boat Races are held almost every year in the main cities of Canada including Vancouver, Toronto, and Montreal.

In 1989, dragon boat racing was imported to Germany, with the first Dragon Boat Festival to mark the 800th anniversary of the port of Hamburg. After 1991, the races moved to Frankfurt and have continued to this day. The Dragon Boat Race has become an important sporting event in Germany.