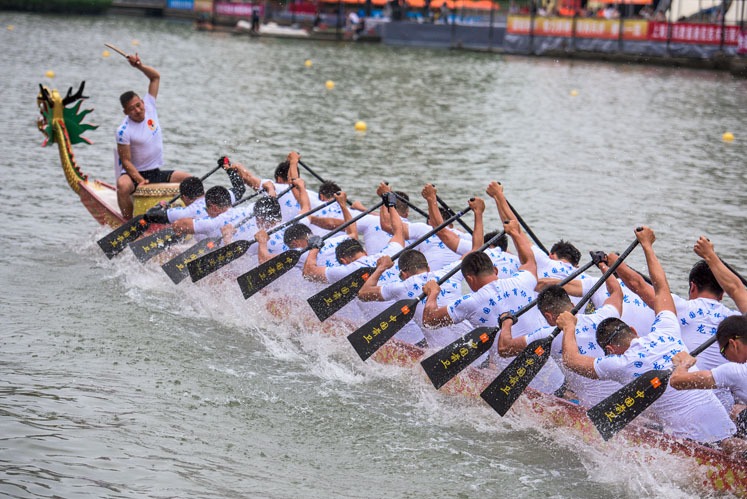 Dragon Boat Festival is one of the four top traditional Chinese festivals, along with the Spring Festival, Tomb-Sweeping Day, and Mid-Autumn Festival.

In addition to Chinese mainland, many other Asian countries and regions also celebrate this festival. In Malaysia, Indonesia, Singapore, and Taiwan, China, it is known as Bak Chang Festival (‘Dumpling Festival'). Learn more facts about the Dragon Boat Festival

Dragon Boat Festival has more than twenty names and each has its own meaning and origins. It is called Duanwu Jie in Mandarin and Tuen Ng in Cantonese, and is also known as ‘Dumpling Festival’ and ‘Double Fifth Festival’.

It is called Dragon Boat Festival, or Longzhou Jie (龙舟节) in Chinese, because of its close association with dragon boats. Chinese people attach great cultural significance to dragons. The two main activities during the festival are eating zongzi (rice dumplings) and boat races, and both are related to dragons.

Zongzi have long been thrown into rivers as offerings and sacrifices to the Dragon God on lunar month 5 day 5, while dragon boats are used in races traditionally held on this day. So, it is also called the Dragon Boat Festival.

Also, 端五 is a variant of Duanwu using wu (五), the Chinese character meaning ‘five’. So ‘Duanwu’ can also mean ‘Start of the Fifth Solar Month’.

Why Is Dragon Boat Festival So Important?

Many believe that Dragon Boat Festival is celebrated to commemorate the death of Qu Yuan, a famous Chinese poet, and minister known for his patriotism and contributions to classical poetry, who eventually became a national hero.

However, it is evidenced that the Dragon Boat Festival actually came before the death of Qu Yuan. Its earliest origin is related to the fifth lunar month which was known to ancients as the ‘month of poison’. During the early hot days of summer, people would easily fall ill and epidemics spread. This made the month seem evil, so people in ancient times regarded it as an important time to prevent diseases and keep evil spirits away.

The Origins of the Dragon Boat Festival

There are many legends about the origin of the Dragon Boat Festival. The most popular ones are as follows:

The Death of Qu Yuan

The most popular one is in commemoration of Qu Yuan. Qu Yuan (340–278 BC) was a patriotic poet and exiled official during the Warring States Period of ancient China. He drowned himself in the Miluo River on the 5th day of the 5th Chinese lunar month, when his beloved Chu State fell to the State of Qin. Local people desperately tried to save Qu Yuan or recover his body, to no avail.

In order to commemorate Qu Yuan, every fifth day of the fifth lunar month people beat drums and paddle out in boats on the river as they once did to keep fish and evil spirits away from his body. Learn more about the History and Legends of the Dragon Boat Festival.

Another possible explanation for the origins of the festival relates to the calendar placement of the occasion.

Since ancient times, the fifth lunar month has been considered an unlucky month, and is known to some as the ‘month of poison’, because the dreaded ‘five poisonous creatures’ (五毒wǔdú) begin to emerge in this month. Traditionally, the five creatures refer to centipedes, scorpions, snakes, toads, and spiders. Poisonous creatures, brought out by the warming weather and seasonal fluctuations, as well as natural disasters and illnesses are common in the fifth month.

The fifth day of the fifth month (“double five”) was believed to be a very inauspicious day. On this day, people would put wormwood and calamus on the door and wore fragrant mugwort pouches (香包). Since the shape of calamus leaves is like that of a sword and due to the strong smell of the herb, it is believed that calamus can keep pests as well as evil spirits away. So, Dragon Boat Festival is also called "Calamus Festival" (菖蒲节 Chāngpú Jié).

How Do People Celebrate the Dragon Boat Festival?

Dragon Boat Festival customs can be roughly divided into two categories. One is to worship the god of dragon and heroes, such as Qu Yuan. The activities include dragon boat races and eating glutinous rice dumplings.

Another category aims to fend off evils and keep people healthy. The activities include bathing in herbal concoctions, hanging wormwood and calamus, and drinking realgar wine.

Zongzi (粽子zòngzi /dzong-dzuh/) are the most traditional Dragon Boat Festival food. Related to Qu Yuan commemoration, the legend says that lumps of rice (not unlike zongzi) were thrown into the river to stop fish eating his drowned body.

In the past, every family would make sticky rice dumplings and pass them out as gifts, receive them, and eat them. Today only a few of the more traditional older family members will bother to cook their own, while the majority are purchased from restaurants and bakers.

Zongzi are made of glutinous rice filled with meats, beans, and other fillings. They are wrapped in triangle or rectangle shapes within bamboo or reed leaves and tied with soaked stalks or colorful silky cords. The flavors of zongzi are usually different from one region to another across China. Read more on Zongzi.

Dragon boat racing is the most important activity of the Dragon Boat Festival. It is said to originate from the legend of people paddling out on boats to seek the body of patriotic poet Qu Yuan (343–278 BC), who drowned himself in a River.

There is another explanation. It is believed that dragon boat racing can be traced back to over 2,000 years ago, when it was a way to worship the Dragon God or Water God.

The wooden boats are shaped and decorated in the form of a Chinese dragon. The boats’ size varies by region and usually need 30–60 people to paddle them. During the races, dragon boat teams paddle harmoniously and hurriedly, accompanied by the sound of beating drums. It is said that the winning team will have good luck and a happy life in the following year.

The most famous dragon boat races can be found in Hong Kong, Guangzhou, and Hangzhou. Read more on Dragon Boat Racing.

The Dragon Boat Festival is held at the start of summer when diseases are more prevalent. Mugwort leaves are used medicinally in China to combat such diseases. Their fragrance deters flies and mosquitoes. Calamus is an aquatic plant that has similar effects.

There is an old saying: 'Drinking realgar wine drives diseases and evils away!' Realgar wine is a Chinese alcoholic drink consisting of fermented cereals and powdered realgar (ruby-like arsenic sulphide).

In ancient times, people believed that realgar was an antidote for all poisons, and effective for killing insects and driving away evil spirits. So, everyone would drink some realgar wine during the Dragon Boat Festival.

Before Dragon Boat Festival arrives, parents usually prepare perfume pouches for their children. They sew little bags with colorful silk cloth, fill the bags with perfumes or herbal medicines, and then string them shut with silk threads.

Did you know that “Happy Dragon Boat Festival” (端午快乐 Duānwǔjié kuàilè) might not be an appropriate greeting, even though it sounds quite natural? (This is because of the solemn commemorative and evil-suppressing aspects of the day.)