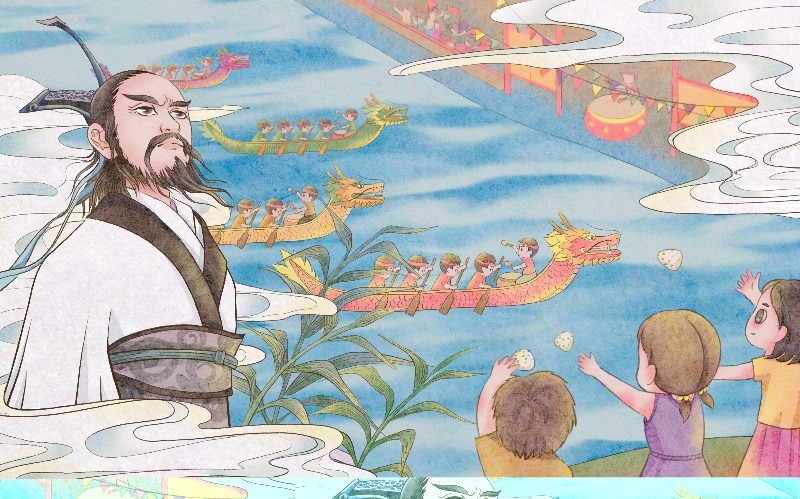 Qu Yuan (Chinese: 屈原 Qū Yuán /chyoo ywen/) (c. 340–278 BC) was a Chinese poet and politician in the State of Chu during the Warring States Period.

Born into a noble family, he achieved a high position in the court while still in his 20s. However, his appeal for a political overhaul made him alienated as an official. He was slandered by his enemies and sent into exile.

Qu wrote many famous poems during his exile. The poet expressed a deep concern and love for Chu and its people.

In 278 BC, upon learning that his beloved country the Chu State had been defeated by the Qin State, Qu Yuan was in great despair and distress, and he chose to end his life by holding a rock and drowning himself in the Miluo River.

Qu Yuan is not only known for his patriotism but also for his contribution to classical poetry and verses.

Qu Yuan is regarded as the first author of verse in China to have his name associated to his work. Prior to his time, poetic works were not attributed to any specific authors. He was listed as one of the world's four literary celebrities by the World Peace Council in 1953.

His most famous work is Li Sao (离骚 Lí Sāo), which means ‘Parting Sorrow’. This is a part of the anthology known as Chu Ci (楚辞 Chǔ Cí), the ‘Chu Verses’. He initiated the style of Sao, in which he abandoned the classic four-character verses and used verses of varying lengths, which resulted in poems with more rhythm and latitude in expression.

Qu’s other works include Jiu Ge (‘Nine Songs’) — a collection of songs used in ancient shamanistic ritualistic dramas, and Tian Wen (‘Heaven Questions’), which is characterized by 172 questions put to Heaven.

The Story of Qu Yuan and Dragon Boat Festival

According to the legend, after Qu’s suicide in the Miluo River, local villagers rowed out on the river to search for his body, but failed.

In order to keep fish and evil spirits away from his body, the villagers splashed the water with their paddles and beat drums. They also threw lumps of rice into the river to feed the fish, so that they would not eat Qu Yuan's body.

The legend continues, that late one night, the spirit of Qu Yuan appeared before his friends and he asked his friends to wrap their rice in three-cornered packages to ward off the dragon.

Since then, people commemorate Qu Yuan every year on the fifth day of the fifth month of the Chinese lunar year (the day of Qu’s death) by dragon boat racing and eating zongzi (typically three-cornered packages of sticky rice), which combines several aspects of the Dragon Boat Festival origin story: dragons, paddles splashing, drums beating, and lumps of rice in three-cornered packages.

These two most important customs of the festival are both associated with Qu Yuan.