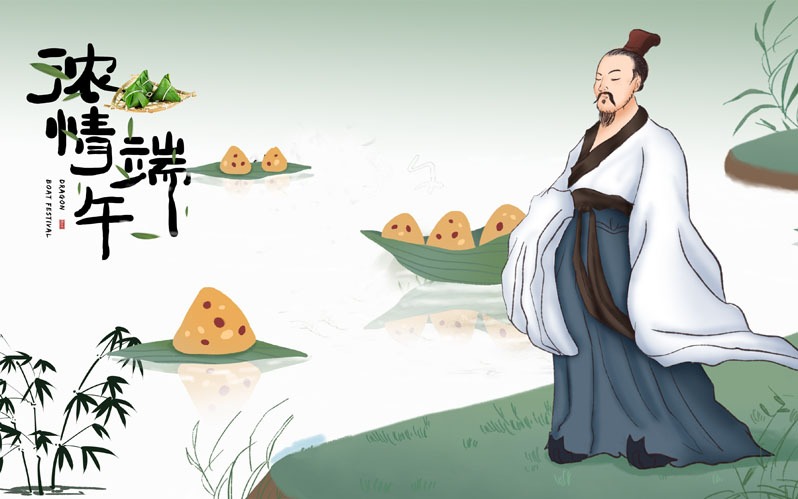 The Dragon Boat Festival is a traditional Chinese festival. It has a history of more than 2,000 years, and is believed to have originated during the Warring States period.

There are a number of origin stories related to the Dragon Boat Festival, among which the following 3 legends are the most widely circulated.

Qu Yuan (340–278 BC) was a patriotic poet and a loyal official of the state of Chu during the Warring States Period. He was the number one advisor of the Kingdom of Chu, and dedicated his whole life to assisting the king to build the State of Chu stronger.

He advised the King to ally with the State of Qi (one of the seven warring states: Qi, Chu, Yan, Han, Zhao, Wei, and Qin) to fight against the most powerful State of Qin. However, he was slandered by jealous officials and accused of treason, and the King dismissed and exiled him.

During his exile, Qu Yuan wrote a great deal of enduring poems showing his love and passion for his country, some of which are still very famous in China.

In 278 BC, the Qin State conquered the capital of Chu. On hearing of the defeat, on the 5th day of the 5th lunar month, Qu Yuan in great despair committed suicide by drowning himself in the Miluo River (a branch of Yangtze River) as a gesture of dying along with his motherland.

The rest is legend… When they heard of Qu Yuan's death, the local people were very sad, and rowed out on the river to search for his body, but were unable to find him. To preserve his body, the locals paddled their boats up and down the river, hitting the water with their paddles and beating drums to scare evil spirits away. They threw lumps of rice into the river to feed the fish, so that they would not eat Qu Yuan's body.

An old Chinese doctor poured realgar wine into the river to poison the monsters and to protect Qu Yuan.

Since then, people in the Miluo River area (about 50 km north of Changsha in central China's Hunan Province) have followed similar practices to commemorate Qu Yuan on the fifth day of the fifth lunar month. Gradually, rowing boats developed into dragon boat racing, the lumps of rice became sticky rice dumplings (zongzi) traditionally eaten during the festival, and realgar wine is now drunk in commemoration of the great patriot Qu Yuan.

In Jiangsu and Zhejiang, the legend of Wu Zixu (伍子胥) is very popular. Wu Zixu (722–481 BC) was also from the State of Chu, before the time of Qu Yuan. His father was a loyal tutor of the Chu ruler's family, but was imprisoned by the king of Chu. The king also ordered the execution of Wu Zixu and his older brother Wu Shang. He was forced to flee to the State of Wu after his father and brother were killed.

Wu Zixu assisted the king of Wu in conquering the Chu State and avenged the deaths of his father and brother. After that, Wu Zixu rose quickly in prominence. However, after the king died, his son Fuchai took the throne. Concerned with the safety of the kingdom, Wu Zixu advised the king to conquer the State of Yue, but Wu Zixu did not gain the new king's trust, and was ignored, instead listening to an official who was bribed by the state of Yue.

The king forced Wu Zixu to commit suicide on the fifth day of the fifth lunar month. Before he committed suicide, Wu Zixun asked the king to remove his eyes and hang them on the top of the city gate, so he could see the capture of Wu by Yue troops .

The king knew was very angry and ordered Wu Zixu's body be thrown into a river near Suzhou. The locals who sympathized with him held dragon boat racing and other activities in memory of him, and this is also cited as the origin of the Dragon Boat Festival.

Another popular legend about the Dragon Boat Festival is in memory of a young girl, Cao E (曹娥, 130–143) who died trying to retrieve her father's body from a river in Zhejiang Province, central East China.

When her father drowned in a river, and his body was unable to be found for days, Cao E walked along the river bank day-and-night looking for her father's body, crying her heart out.

On the fifth day of the fifth lunar month, she jumped into the river too, and five days later her body was found with her father in her arms.

In order to commemorate Cao E and her sacrifice of filial piety, in 151 a temple was built, the river she drowned in was renamed the Cao'e River (a southern tributary of the Qiangtang River that flows through Hangzhou), and many activities including dragon boat racing are held every fifth day of the fifth lunar month in northern Zhejiang.

Although the legendary origins of the Dragon Boat Festival vary regionally, they all involve some of the most important traditions in Chinese culture like virtue, spirit, loyalty, honor, and love. They have been, and will probably always be, told from one generation to the next.