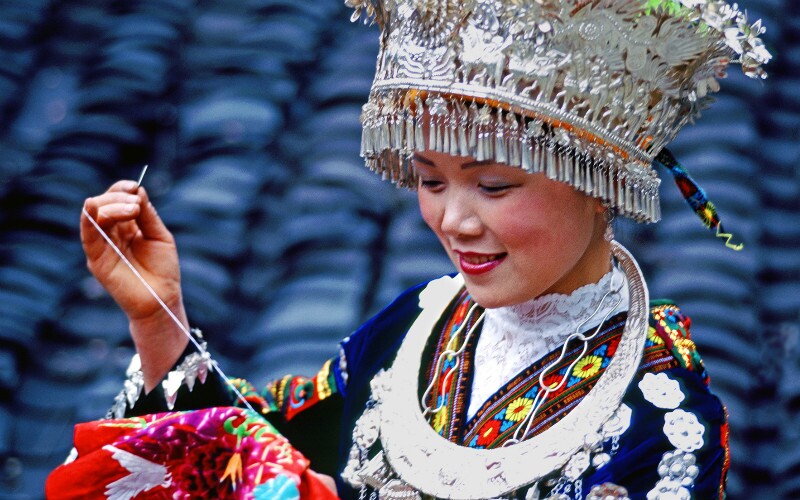 Customs of sacrificing and worshiping the moon equally flourish among China's ethnic minorities, along with many other exotic practices.

On the evening of the Moon Festival, moon worship is popular among the Dai people in Yunnan.

Based on the Dai legend, the moon was once Yan Jian, the third son of the Emperor of Heaven. Yan Jian was a heroic and strong youth who led the Dai people to beat enemies and won Dai folks over. Later, after his unfortunate death, he became the moon and rose into the sky giving off the soft moonlight and giving light to the Dai people in the dark.

Every Mid-Autumn Festival, in order to hunt for festival game men go up onto the hills and shoot fire finches and pheasants with powder shotguns early in the morning. Young women are busy going to lakes and ponds catching fish, and preparing for festival dinners. Grannies are busy pounding glutinous rice and cooking food of various sizes. They put a circular glutinous rice pie on each corner of the table and imbed a stick of unlit joss stick in each pie.

Once the moon comes up over the mountain forest, they will light the joss sticks and all family members will start to "worship the moon". Then they'll fire powder shotguns to the sky to honor Yan Jian, the hero. Finally, all family members will happily sit at the little square table, tasting food, talking, laughing and enjoying the moon. They don’t finish until they have enjoyed themselves to the full.

In sacrificing to the moon, Oroqen people put a basin of water in the open, set offerings there, and then kneel down before the basin and kowtow to the moon. Tu people fill the basin with clear water so that the reflection of the moon can project into the basin, and then, people ceaselessly strike the moon in the basin with little stones, which is called "striking the moon".

The activity of "sacrificing to the moon and inviting gods" of Zhuang people in West Guangxi is more typical. In the middle of the eighth month of the lunisolar calendar, on the evening of the Mid-Autumn Festival, at the village head and end people will set an altar, placing the sacred offerings and censers, and erect a branch or bamboo pole, about one foot high, symbolizing Sheshu (referred to a proper tree planted in a proper place), which is also used as a ladder for the Moon Goddess to descend to the world and go back to heaven.

Mongolians "chase the moon". On the evening of the Mid-Autumn Festival, Mongolians enjoy playing the game of "chasing the moon". People will mount their horses, galloping on the grasslands under the silver-white moonlight. They gallop towards the west, with the moon rising in the east and setting in the west. Tenacious Mongolian riders will not stop "chasing the moon" until the moon sets in the west.

Mooncake is the most popular and important food during the Mid-Autumn Festival.

Tibetans "look for the moon". The custom for Tibetan people in some areas of Tibet to celebrate the Mid-Autumn Festival is called "looking for the moon". On that night, young men, women and children search for the moon’s reflection in ponds, following the reflection of the moon in the water along the river, and then go home for reunions and moon cakes.

The Hezhe people enjoy "moon worship". In the Hezhe settlements of the northeast of China, every Mid-Autumn Festival, people will pick grapes and worship the moon. It is said to be in commemoration of a clever and laborious Hezhe wife. She could not suffer her mother-in-law's sadism and escaped to the riverside to beg for the moon's help. Finally, she ran onto the moon.

De'ang people enjoy "dating under the moon (chuanyue or chuanyueliang)", a De’ang courtship custom. Young De'ang men and women in Luxi, Yunnan, go out once on every Mid-Autumn Festival, with a big and extraordinarily bright moon hanging in the sky. From hilltops to village edges, there comes a melodious sound of gourd pipe music from time to time, as the young men and women are "dating under the moon" together and unburdening themselves to each other. Some of them also deliver orange areca nuts and tea in order to woo their date.

A'xi people, a branch of the Yi ethnic group, "dance in the moon". "Dancing in the moon" is the traditional custom of A'xi people at Mid-Autumn Festival. On the evening of the Mid-Autumn Festival, people from every village will gather on the open ground of the mountain village. Girls in veils dance, as do the guys carrying the big sanxians (three-stringed Chinese instruments) on their shoulders. However, more intriguing still is the antiphonal singing as young men and women express their loving feelings to each other.

Miao people enjoy "teasing in the moon (naoyue)". On the evening of the Mid-Autumn Festival, the Miao people will stream along the narrow paths in the silk-like moonlight, playing the melodious lusheng (a wind instrument with multiple bamboo pipes) and dancing Miao dances with songs. Young men, during the activity of "teasing in the moon", will look for their lovers, express their affections and then marry forever, just as the moon marries with the clear water.

The Gaoshan people "admire the full moon". Gaoshan people live in the mountainous regions of Taiwan Province. At Mid-Autumn Festival, with the bright moon riding high in the sky and the radiance lighting up the earth, they, dressed in national costumes, sit around together, singing and dancing, drinking and admiring the full moon, sharing the happiness of a family union.

On the evening of the Mid-Autumn Festival, a funny custom of "stealing moon vegetables" is popular in Dong villages in Hunan.

According to a legend, on the evening of the Mid-Autumn Festival, fairies from the Moon Palace would descend to the world and spread nectar over the mortal world. The nectar from fairies is selfless. Therefore, people in that evening might share the fruit and vegetables with nectar together. Dong people named this custom "stealing moon vegetables".

On the evening of the Mid-Autumn Festival, Dong girls with umbrellas will choose garden lands of their own lovers to pick melons and vegetables and it would not be considered as "stealing".

"Hey! Your melons and vegetables have been taken by me. You please go to my home to have oil-tea!" they yell.

First, they place red string as if they are fairies from the Moon Palace. If they pick a twin vegetable or fruit, it signifies that they will have happy affections. So, cow peas growing in pairs have become the picking targets. Sisters-in-law also go to others’ garden lands to "steal moon vegetables" this night. However, they wish to pick the fattest melon or a handful of fresh green soybeans, because this symbolizes stout and strong children (maodou, green soybean in Chinese, sounds similar to a word for‘children’in Chinese).

Guys also have the custom of "stealing moon vegetables" because they wish fairies from the Moon Palace to grant them happiness as well. However, they can only cook them up to eat in the wild rather than bring them home. "Stealing moon vegetables" gives the Dong village unbounded joy and a magical touch on the evening of the Mid-Autumn Festival.

The pomelo is an important Mid-Autumn Festival food for Hakka people, besides mooncakes.

Hakka people's customs, such as eating mooncakes and admiring the full moon, are almost identical to those in other places of our country. Hakka call it "Eighth Month Festival" or "Mid Eighth Month".

When the full moon rises on Mid-Autumn Festival night, Hakka people will place mooncakes, peanuts and pomelos to prepare for the activity of "moonlight piety" in courtyards, pavilions or grain drying areas in front of houses facing the moon.

There is something special about eating things. Parents tend to want everybody to eat those offerings used to worship Luna (the Moon Goddess) first. Chinese sacrificial culture has such a tradition that liberalists often still share the offerings and eat after the gods, so that they end up part of the whole sacrificial ceremony. The shared food, has received Luna's blessings and has performed the traditional sacrificial culture. Meixian people's belief is that anyone who ate those offerings would be "better-behaved, more blissful and propitious".

In Meizhou, except for mooncakes, the traditional Mid-Autumn food with universal significance, the pomelo is an essential festival food, including golden pomelo (Shatian pomelo), honey pomelo or Shuijing pomelo. Eating pomelos has some beliefs attached to it. For example, cutting the pomelo is called sha you (killing the pomelo) which has a meaning of exorcism. It is also said that peeling the pomelo skin off is ‘ghost skin peeling' which signifies the attempt to get rid of ghosts and disasters.

Mooncakes in Hakka regions include five-kernel mooncakes and a kind of round cake made with glutinous rice flour and sugar, compressed into different sizes. Though the social economy progresses continually, Hakka people are always passing down their traditional catering culture, as well as developing folk catering culture.