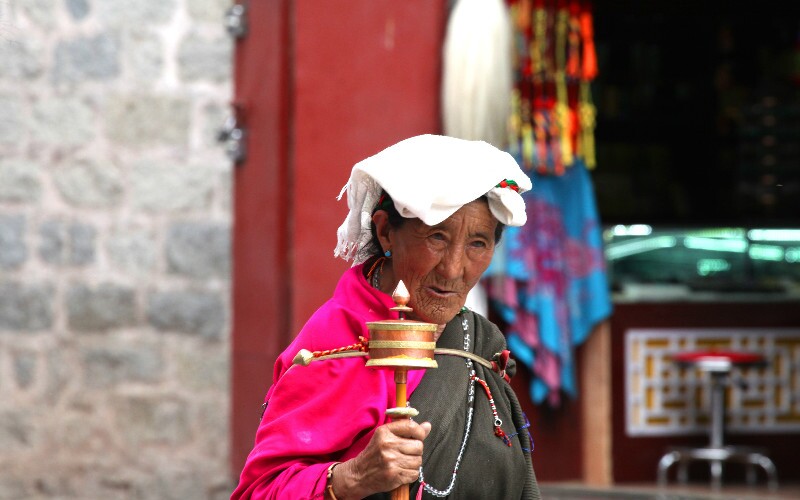 The Tibetan Ethnic Minority in China

Tibetan people are perhaps China's most popular and mysterious ethnic minority. They live among the world's highest mountains on a vast beautiful Tibetan plateau.

The Tibetan ancestors once had a powerful empire about 1,400 years ago, and after that, Tibetan people vied for control of Central Asia with Han Chinese and Mongols.

Now, there are about 7,000,000 Tibetan people, and they are one of the biggest of China's 55 ethnic groups. Tibetan people don't only live in Tibet. They also live in several Chinese provinces west and northwest of Tibet.

Tourists like to go to many Tibetan areas, such as Lhasa, Jiuzhaigou, and Shangri-la.

Who are the Tibetan people

The Tibetan people are mountain dwellers who live in a vast Tibetan plateau composed of several of the world's highest mountain ranges.

These include the Himalayan range north of India that is the highest range in the world, the Kunlun range, and the Qilian mountain range along Gansu Province.

In ancient times, the ancestors of the present Tibetans lived along the Yaluzangbu (Brahmaputra) River.

In the 6th century, the chieftain of the Yarlung tribe conquered several nearby tribes to become king. He was known as Zanpu (king) and established the Po dynasty.

History of the Tibetan Imperial Age and Afterwards

In the early 7th century, Songtsan Gampo (first King of Tibet) unified the whole of Tibet and shifted the capital to Lhasa. This empire was known in Chinese history as the Tupo kingdom.

By the reign of the emperor Ralpacan, in the opening years of the 9th century, the empire included the Tarim Basin of Xinjiang, the Himalayas, and reached into the provinces of Gansu and Yunnan.

During the Ming Empire (1368–1644) period, the Dalai Lamas began to rule the Tibetans. This is when they started to build the Potala Palace in Lhasa to be the palace of the Dalai Lamas and also a fortress in 1645.

Where do Tibetan People Live in China

With a population of about 7 million, the Tibetan people live mainly live in the Tibet Autonomous Region in southeast China and in the neighboring provinces of Qinghai, Gansu, Sichuan, and Yunnan.

Their population is rapidly growing in China. It is thought that about 100,000 Tibetans live in India and Nepal.

The land of the Tibetans is divided into the old former Tibetan provinces called U-Tsang, Kham, Ngari, and Amdo. The center of the old Tibetan empire is U-Tsang. U-Tsang is where Lhasa and the major Tibetan towns of Tibet are.

To the east of Tibet is Kham. Kham has peaks amid heavily forested valleys where the headwaters of several of Asia's biggest rivers spring. Part of Kham is in Yunnan.

Amdo is in the northwest, and much of it is in Sichuan Province, Gansu Province, and Qinghai Province.

Lhasa is the capital and largest city. This is where the Dalai Lamas once lived as head of their government. The second-largest city is Shigatse that has a population of about 800,000 people where the Tibetans live with the Chinese.

Outside of Tibet or U-Tsang, about 1.2 million Tibetan people live in the high mountains of Sichuan. You can meet them if you visit the Jiuzhaigou area.

About 150,000 live in Yunnan. About 21% of Qinghai Province's 7 million people are Tibetans. About half a million Tibetans live in Gansu.

High altitude beautiful places abound in their traditional homeland areas outside of Tibet.

These places include Huanglong National Park and Jiuzhaigou National Park in Sichuan, Shangri-la in Yunnan, and Qinghai Lake in Qinghai Province.

In the high mountains on the edge of the mountainous plateaus, Tibetan culture merges with and gives way to the cultures of other Tibetan ethnic groups who live in high altitudes such as the Qiang who live in the mountainous region north of Chengdu near Jiuzhaigou.

What Language do Tibetan People Speak

Tibetan ethnic speak their own language, the Tibetan language is divided by scholars into four dialects. Unlike many of the ethnic groups of China, the Tibetans have their own ethnic indigenously developed writing system.

It was developed to its present form in the 9th century. They have a body of religious and historical literature from ancient times that helps to define their culture.

To increase the number of prayers they perform, they may try to turn prayer wheels as often as possible as shown in the picture.

Tibetan people are praying by running the prayer wheel

They think that turning a prayer wheel is equivalent to chanting scriptures and prayers, and it is a routine job for Tibetan people.

For the same reason, they write prayers and chants on flags and cloths that they hang up in the wind. It is thought that each flap in the wind makes better karma.

Every year, Tibetans will visit Mount Kailash for a yatra which means a pilgrimage of great moral significance in Tibetan Buddhism.

Devout Tibetans prostrate themselves on the ground after every few steps in worship. Tibetan people believe that a pilgrimage walking a circle around the mountain and lake can wash away the sin of your whole life.

Tibetans prostrate themselves on the ground
Recommended Tibet Tours:

Tibetan New Year and Shoton Festival are the most important festivals for Tibetan people. >> Check more of Tibetan Festivals

A number of cultural entertainment performances take place in the very Tibetan region during the festival. >>Read more of Tibetan New Year.

It celebrates eating yogurt, the Tibetan monks who end their season of meditation, the watching of Tibetan dramatic operas, and Tibetan Buddhism. It is held annually in the month of August of the international calendar.

The main part of the celebration activities is the Buddha exhibition in Drepung Monastery, also known as unveiling Tangka. It is a great occasion for both Tibetans and tourists. >>Read more on Shoton Festival

Customs and Traditions of Tibetan People

Hada gift-giving: Tibetans deem Hada to be a precious gift. Hadas is strips of snow-white scarves made of yarn or silk.

It symbolizes goodwill and respect, and it might be presented at various occasions such as festivities and the arrival and departure of guests.

Five-colored hadas are the best kind. There are made in five colors: blue, white, yellow, green, and red.

These respectively indicate sky, cloud, land, river, and Buddha dharma. Five-colored hadas are very valued gifts and are presented only on the grandest occasions such as Buddhist activities.

Presenting hada is a kind of common courtesy in Tibet. They do it to show purity, loyalty, faithfulness, and respect to the receivers.

Even when people correspond with each other, they may enclose a mini hada in their letters for greeting and expressing good wishes.

What's more interesting is that when Tibetans go out, they tend to take several hadas with them in case they may need to give them to friends and relatives they encounter along the way.

Tibetan people have very characteristic clothes. Generally speaking, they wear a short upper garment made of silk or cloth with long sleeves inside, a wide and loose robe outside, and long boots of cattle hide.

For the convenience of work or labor, they usually expose their right shoulder or both arms by tying the pair of sleeves around their waist.

Both men and women have pigtails, but men coil up the pigtails over the head while women comb their hair into two or more pigtails and tie beautiful ornaments on them. Women prefer to wear an apron with beautiful patterns.

Yunnan's Kawagebo Mountain and the Meili Snow Mountains, for example, have been called the most beautiful mountains on earth. But good reliable transportation is important to travel in and enjoy these areas.

Many minority villages are located in remote high valleys and mountainsides where some have retained their traditional cultures and lifestyles.

Tibet had for centuries remained isolated in the mountains, so many of the native people are still quite traditional compared to many other ethnic minorities.

Some don't speak Mandarin well. They might be difficult places to access on your own. So we suggest our private tour drivers and vehicles can be a big help.

In the Tibetan ethnic areas, there are also other ethnic groups to see, so having a knowledgeable local guide and interpreter is important. They have local contacts and knowledge of the area and a driver.

We can take you to visit with families and arrange accommodation. Our expert guides can translate for you too. To visit Tibet, you will need to travel with a certified travel agency such as ourselves to qualify for the mandatory Tibet Entry Permit.

Here are sample itineraries for touring in Tibetan minority areas of southwest China and Tibet. We can modify these so you can go to the Tibetan regions that interest you the most.