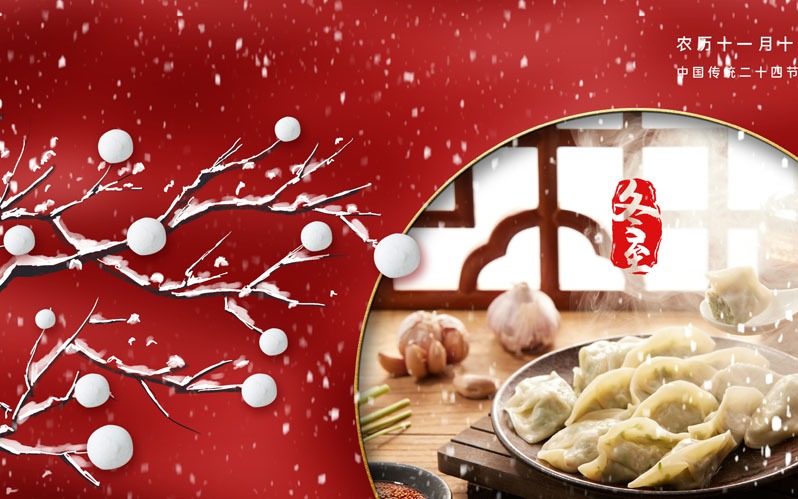 There is an old saying that Dongzhi (/dong-jrr/ 'the Winter Solstice') is more important than Chinese Lunar New Year. Dongzhi has an important place in the traditional festivals of China. It is usually celebrated on December 20th or 21st, when the night is longest and the day is shortest in the northern hemisphere. A traditional holiday celebrated by many Chinese people, Dongzhi has a long history and certain notable customs.

What is Dongzhi Festival?

Dongzhi (冬至) literally means 'Winter's Arrival'. It is one of the 24 solar terms of China's traditional solar calendar. It has long been celebrated on (China's) Winter Solstice when the night is longest, and the day is shortest in the Northern Hemisphere. Dongzhi became an imperially recognized traditional festival during the Han Dynasty era (206 BC – 220 AD).

The Date of Dongzhi Festival

Chinese people celebrate Dongzhi Festival in many ways. The most popular ones are worshipping heaven and ancestors, saying the Nines of Winter, making rice wine, and eating dumplings and ginger rice.

Chinese people have worshipped heaven on Dongzhi Day since the Han Dynasty. Many temples were built for this reason, including the famous Temple of Heaven in Beijing. It was believed that heaven worship would bring a great harvest and good health for the coming year.

The Temple of Heaven was used to worship the Heaven

It is a tradition to worship the ancestors as part of the Dongzhi Festival. People set up incense burners in front of their ancestors' tablets and place some food on a table in front, such as dumplings, steamed chicken, or cooked pork as a symbolic offering to their family ancestors. In some eastern parts of China, people take food and incense to their ancestors' tombs, sweep the tombs, and pay respects to their ancestors during the winter solstice festival.

It is the tradition to drink rice wine on the night of Dongzhi in southern China. The rice wine is made with glutinous rice or yellow rice as well as sweet-scented osmanthus. Drinking liquor brings a feeling of warmth to the cold Dongzhi festival.

People in the south of China usually preserve roasted meats at Dongzhi Festival. Dongzhi baked pork has become an indispensable delicacy on the dinner tables of Guangdong and Guangxi provinces during Chinese New Year.

In many areas of northern China, people count the Nines of Winter during the coldest part of winter. The Nines of Winter is a folk song. In Chinese traditional culture, nine is the 'extreme number', representing eternity. Chinese people believed that spring will come after nine periods of nine days starting from the Winter Solstice.

'During the first and second nine days, it's too cold to put your hands in the air;

During the third and fourth nine days, you can walk on ice;

During the fifth and sixth nine days, willows on the banks start to sprout;

During the seventh nine days ice will dissolve;

During the eighth nine days, wild geese fly back north;

During the last nine days, farmers' oxen start to work in the fields.'

The song charts the changes in the weather and natural world that come before the time for farming to begin again.

In northern China where it can get bitterly cold, the people lacked sufficient warm clothing and adequate heating, so they ate hot food and drank hot liquids to stay warm. People believed that when the days were short, there was insufficient Yang energy, and they tried to eat high Yang foods according to Chinese medicinal cuisine principals.

Dumplings have been the most traditional food in the north of China for a long time. People make dumplings on Dongzhi Day with their friends and family.

There is an old saying that eating dumplings on Dongzhi can protect ears from frostbite. A legend goes that in ancient times, a doctor named Zhang Zhongjing invented dumplings by wrapping mutton and Chinese medicine in dumpling dough and gave them to people to cure frostbite. From that time, the tradition of eating dumplings on Winter Solstice Day was passed down from generation to generation.

Besides dumplings, people of south China have a tradition of eating glutinous rice balls called tangyuan. The history of eating tangyuan can be dated back to the Song Dynasty (960–1279).

Some people in southern China and some Chinese in communities in Southeast Asia gather together to make and eat a meal of tangyuan (汤圆 Tāngyuán /tung-ywen/). Tangyuan symbolizes family unity and prosperity.

These are specially cooked balls of rice that might have a filling of bean paste or meat with sweet high yang herbs. These are usually pink or white colored. Tangyuan is often served in a bowl with a sweet soup or broth.

With their meal of tangyuan, they may also drink a mild rice wine that might contain cassia oil. Cassia is an herb that is high in yang and is one of China's Top 10 Favorite Herbs and Spices.

Wonton soup is another must-eat food for the Dongzhi festival in eastern parts of China, especially in Zhejiang and Fujian provinces. Stuffings of wontons are much the same as dumplings'.

However, wonton dough is much thinner than dumplings'. Eating a bowl of wonton soup can keep people warm and comfortable in the cold of winter.

In northern parts of China, mutton is a popular food at Dongzhi Festival. In Chinese food culture, mutton is regarded as having significant blood replenishment benefits and is therefore considered a healthy food to eat in winter. Eating mutton on Dongzhi Day warms people up and is said to prevent colds in the coming winter.

For many Taiwanese and people of Taiwanese descent in other countries, the festival is still important. Families will go to the ancestral tombs and have meals of tangyuan, and they might offer tangyuan to the spirits at the tombs.

They also have a custom of offering nine-layer cakes to their ancestors. The cakes are made of rice flour and are shaped like animals such as chickens, ducks, tortoises, pigs, cows, and sheep.

According to traditional Chinese medical concepts, winter is the time of year it is important to rest, relax and nourish the body with high yang fatty foods.

Chinese follow the behavior of animals that hibernate during winter to rejuvenate and preserve their bodies. So they rest on the day if they can, eat foods containing ginger, and enjoy ginseng and similar high yang herbs that can restore and relax the nerves and alleviate stress.

China's Winter Solstice has been celebrated since the Han Dynasty (206 BC – 220 AD). It is said that the earliest winter solstice in China was discovered by a sage called Zhou Feng when using a sundial. Since then, Winter Solstice (Dongzhi) has been an important festival in China. There is an old saying that Dongzhi is more important than Chinese New Year.

During the Tang Dynasty (618–907) and Song Dynasty (960–1279) eras, officials in the government were granted a 7-day holiday to go back home to celebrate the festival with their family and worship heaven and their ancestors.

If you want to send a message to your friends, you could use these popular Dongzhi Festival messages:

There are no clothing traditions for Dongzhi Festival. But nowadays, more and more young people wear Hanfu (Han-Dynasty-style costumes) to celebrate the Winter Solstice in China because Dongzhi originated during the Han Dynasty era. If you are out on the streets on the night of Dongzhi Festival, you may see some beautiful Hanfu clothes on young women.