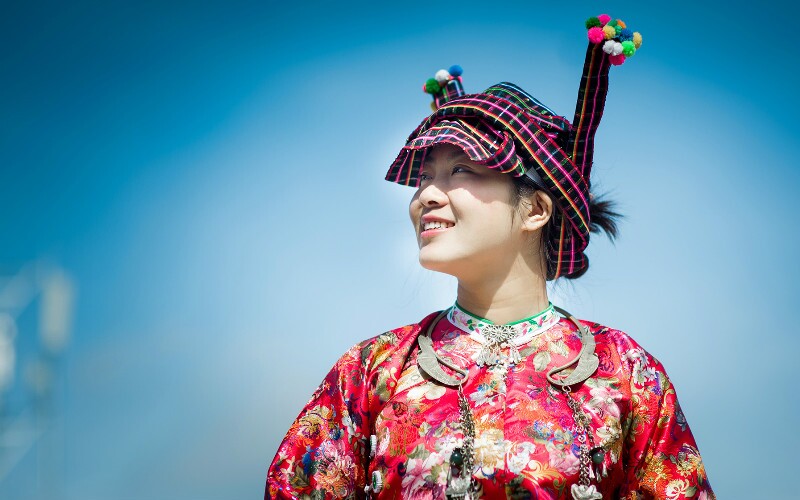 Zhuang Girls are singing and dancing in beautiful clothes.

The Zhuang Nationality Song Festival, also known as Gexu Festival (歌圩节) and Gepo Festival (歌婆节), is held in the third day of the third month of the Chinese lunar year. On this day, the Zhuang people all head to a certain place to sing songs together.

It is a festival celebrated by the Zhuang Minority in two separate parts: day and night. The daytime celebrations consist chiefly of singing matches in the fields, and the main nighttime events include singing production songs, seasonal songs, historical songs, and pan songs (盘 for seven female singers and two violas).

The Zhuang Nationality Song Festival originates from a festival of sacrifices and folk song and dance in the Clan Tribes Age. With the development of society, the sacrificial activity gradually ebbed away, and now is an activity which focuses on communication by singing songs. The songs are not only a medium to pass on Zhuang culture, but also a collection of happy love stories of Zhuang girls and boys. This festival is important to every Zhuang person and their family.

There are many romantic legends associated with the Zhuang Nationality Song Festival.

The most popular one is "choosing a son-in-law by singing matches". There once was a beautiful girl who was very good at singing. Her father, an old singer himself, wanted to chose a young man who was good at singing to be his son-in-law. Young men came from different places and all gathered in a certain place to compete using their singing skills. Thus the Singing Fair, or Song Festival, was formed.

The most romantic one is the love story of Liu Sanjie (the Zhuang "Goddess of Songs") and A Niu. Liu Sanjie was a beautiful girl who was very good at singing and very righteous. One day, when she was collecting wood on the mountainside, the landlord cut her vine, and Liu Sanjie fell off the cliff. Fortunately, Liu Sanjie didn’t die, and she met A Niu. And they were engaged under Yangshuo's big banyan tree when Liu Sanjie threw ann embroidered love ball to A Niu. Thus the famous love song "Vine and Tree" spread.

There are many interesting activities during the Zhuang Nationality Song Festival, including eating, singing, and the most special activity, throwing xiuqiu. People dress up in their most beautiful national costume to attend this festival. The charming dancing and singing always attracts many people.

Before the festival, girls are busy preparing xiuqiu (绣球 /sshyoh-chyoh/ 'embroidered balls'). On the day young men and women dress in their best clothes. Men hold precious gifts, while women take along their Xiuqiu. Some youths carry a statue of Liu Sanjie on their shoulders and sing in antiphonal (often question-and-answer) style. Girls pile their colorful embroidery on shelves, waiting for boys to come. A xiuqiu is a kind of love token thrown to men by Zhuang girls.

Young men and women are divide into two teams, male and female, and they sing live in antiphonal style (对歌 duige /dway-ger/). The songs are composed on the spot: someone from one team sings a call or question, and someone from the opposing team sings a response. If a girl thinks that a boy is her Mr. Right, she throws him an embroidered ball (xiuqiu). The boy will tie his gift on the ball and return the ball if he likes the girl as well. In this way they are matched.

If you are going to Guilin to watch the Zhuang Nationality Song Festival, why not combine your visit with one of China Highlight's Guilin Tours, or contact us to design a tour according to your requirements?

Alternatively, you can take a taxi to watch the performance by yourself. We kindly offer this information to help you:

Location: Lujia Village (鲁家村 Lǔjiācūn /loo-jyaa-tswnn/) is on the west bank of the Peach Blossom River, about 4 km (2½ mi) northwest of central Guilin.