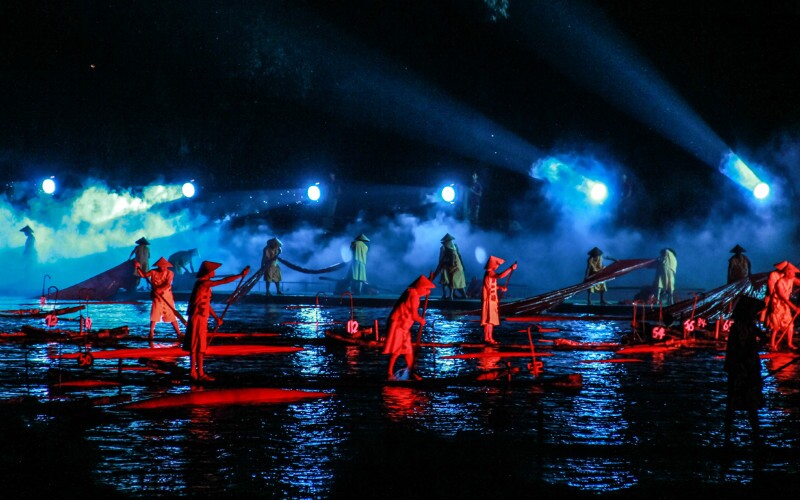 Impression Liu Sanjie was choreographed by Zhang Yimou, one of the most notable Chinese film directors. The show is a must-see for visitors who spend the night in Yangshuo.

It is a spectacular night show combining music and light, ethnic songs and dances, using the Li River and surrounding karst mountains as the stage and backdrop.

It shows for 1 hour once or twice per evening, after dark, except in heavy rain and one month in winter. The performance area is half an hour's walk (10 minutes by electric cart) downstream (southeast) from West Street.

The Highlights of Impression Liu Sanjie

The whole performance is composed of 7 scenes, namely:

It is a creative artistic conception of harmony between man and nature.

In the grand Red Impression scene, the Li River is dotted with fishing lights, and over 600 actors and actresses sing an antiphony.

The most impressive scene is Silver Impression, which reflects a scene of folk celebrations. 200 ethnic minority girls in festive costumes perform on the watery stage, welcoming visitors from all corners of the world.

In The Epilogue the fishing rafts depart and the lights are dimmed, and the song of Liu Sanjie echoes around the hills.

A 1960's movie musical, which has been televised and shown all over China, first made famous the legend of Liu Sanjie. It remains as popular as ever, especially among the minorities of the south, whose fairytale heroine she is. This, other local minority singing, and the acclaimed Yangshuo landscape is probably what inspired Zhang Yimou's production.

The Legend of Liu Sanjie

Liu Sanjie (刘三姐 /lyoh san-jyeah/ "the Third Liu Daughter") is a legendary Zhuang girl with the ability to sing a reply that no-one could match. She has been dubbed the Song Fairy because of this seemingly supernatural gift, and her statue features in the annual Zhuang Song Festival.

Liu Sanjie was, as the story goes, the third-born daughter of a man surnamed Liu, who lived centuries ago (in the Tang Dynasty: 618–907) in Guangxi Province. She became known for her singing as various dignified local oppressors came to her village and were left speechless and defeated by her tuneful and witty songs.

The legend goes that she was wooed by a boy named A Niu (阿牛 /ah-nyoh/ "Bull"), who sung replies to her songs at the Big Banyan Tree in Yangshuo County.

As is the Zhuang custom, Liu Sanjie gave A Niu an embroidered ball to signify she liked him and he could pursue her. A Niu promptly tossed the ball across the river and high onto a rock the other side, where nobody could reach it and it would stay as an everlasting reminder of their love.

This love story has a happy ending, as most fairy tales do. The two singing villagers fell in love and lived happily ever after, blissfully unaware of the impact they would have on Chinese culture and international tourism!

Local idol and ancestor worship have, in some places, incorporated this legendary girl and her image in their offerings of incense, food, drink, bowing and prayer, and she has assumed godlike status. She is generally idolized by the minorities for embodying the dignity of the simple peasant, a charming victory over tyranny, and for their love of singing and a good romance.