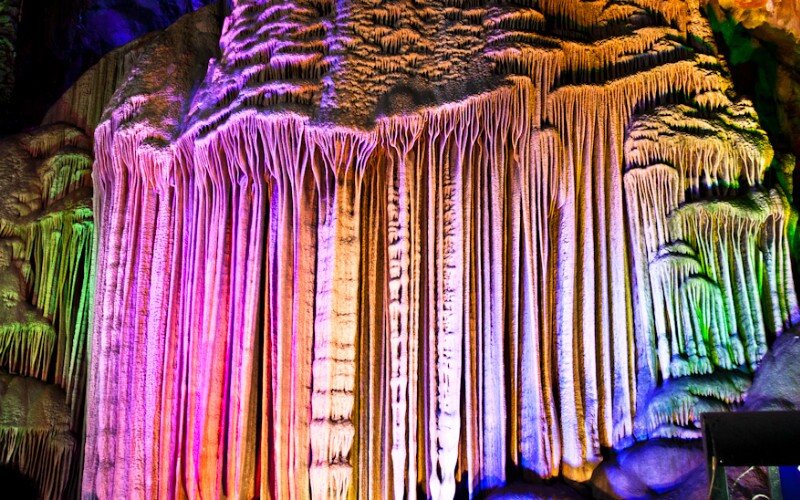 Best Caves to Visit in Guilin

Guilin is a world famous city with numerous limestone hills and caves. According to geologists, Guilin was originally on the ocean floor about 300 million years ago. About 200 million years ago, a lot of limestone deposits were located on the bed of the ocean. Due to the movement of the earth’s crust, the seabed rose and became dry land. With the erosion caused by rainwater and underground water, all the limestone hills, caves and rivers were formed as the karst formation during this period of time in Guilin. When visiting Guilin, the numerous fantastic caves are a great highlight that one should not miss. Among all the caves, the best ones to visit are the Reed Flute Cave, Silver Cave, Crown Cave and Seven Star Cave.

Reed Flute Cave (Lu Di Yan) is located halfway up Bright Moon Hill by the Peach Blossom River, five kilometers away from the center of Guilin City. It was a tourist place during the Tang Dynasty (618-907) according to the ancient inscriptions on the rock face in the cave. After that, people rediscovered it in 1959 and it was opened to tourists in 1962. Regarded as “Nature’s Art Palace”, Reed Flute Cave is a brilliant cave marked on most travel brochures and it is a “must-see” sight in Guilin.

Reed Flute Cave got its name from a type of reed growing in front of the entrance, which can be made into melodious flutes. In the cave, the U-shaped sightseeing tourist route is about 240 meters long and takes less than one hour to visit. Along the tourist route, visitors are able to see a large number of stalactites, stalagmites, stone pillars and rock formations with peculiar and wonderful shapes created by carbonate deposits. Enhanced by multicolored lights, the cave looks like a fantastic underground palace. It is a habit for Chinese people to give each formation a fairy tale or poetic name, such as Penglai Fairyland, Crystal Palace, Dragon Pagoda Mushroom Hills and other interesting names. It’s a pleasure to listen to fairy tales or legends while appreciating the peculiar stone formations. Read more on Reed Flute Cave

Silver Cave (Yin Zi Yan) is located at the foot of Ligui Road in Lipu County. It is about 85 kilometers from Guilin City and 18 kilometers from Yangshuo. For tourists who wouldn’t stay in Guilin but were eager to see some caves, Silver Cave is definitely a good choice for them.

Since Guilin is a world famous tourist city with typical karst landforms, Silver Cave is also a typical karst cave running through 12 mountains with a round route of about 2,000 meters long. The deposits in this cave were formed in different geologic periods. These stalactites and stalagmites are crystal clear and shining like silver, forming a silver river, hence the name.

Silver Cave is divided into three parts: the upper cave, the grand hall and the lower cave. The sky-support pillars, clear underground water, impending waterfall and weird stalagmites in the cave make it a fancy natural wonder. The most famous among all the scenic spots in the cave are the “three unique”: “Waterfall on the Snow Mountain”, “Musical Stone Screen” and “Jasper Lake Fairyland”.

The Silver Cave Tourist Area is surrounded by green hills, crystal clear rivers, green grasslands and trees and has been honored with the description: “a typical representative of Guilin landscape scenery”. This scenic area is also the site for some annually held local festivals, such as a peach flowers festival, a taro festival, a food festival and a rock climbing festival.

Bus routes: Everyday there are buses going to Silver Cave from Guilin and Yangshuo bus stations. It takes two hours from Guilin Bus Station and 30 minutes from Yangshuo Bus Station.

Crown Cave (Guan Yan) is located in Caoping Village along Li River, 29 kilometers from the south of Guilin City. The cave got its present name because of the crown-shaped hill. Due to the sweet spring water running out from the cave, it is also called Ganyan (sweet) Cave. As early as 1637, the famous traveler, Xu Xiake from the Ming Dynasty, visited Crown Cave and gave a detailed description of the cave in his travel diary. He is regarded as the first explorer to visit the cave.

Crown Cave extends for a total length of 12 kilometers but out of that distance only 3 kilometers near Li River has actually been explored and opened to the public. The cave is unique in its ways for sightseeing. Equipped with modern facilities such as a light rail, sightseeing elevator, roller coasters, small boats, and an automatic light and sound control guide, the Crown Cave offers you a distinctive experience for your visit.

Visitors can simply walk to the mountainside by foot or take the light rail and then descend into the cave by the sightseeing elevator. The rock formations inside the cave making grotesque and imposing shapes will arrest your imagination and lead you to a fairyland. Then you can take a small boat to experience the splendid views of the underground river. Crown Cave was listed in the Guinness Book of World Records due to the numerous ways of being able to explore the cave. More details on Crown Cave

Bus routes: Take a direct bus from Guilin Bus Station to Crown Cave (operating from 7:30 am to 5:30 pm) or make a stop at the Crown Cave Dock during your sailing trip along Li River.

Seven Star Cave was also known as Qixia Cave (in Chinese this means the place where colorful clouds settled) in the Sui and Tang dynasties. The limestone deposits located on the ocean floor have been eroded by rainwater and underground water for 100 million years. With the multifarious stalactites, stalagmites and stone pillars formed by the dissolved limestone, the cave looks like a dazzling palace under the multicolored lights. The stone carvings and inscriptions in the cave are also a highlight. It was called the “residence of the immortals” by famous poets and scholars throughout the dynasties.