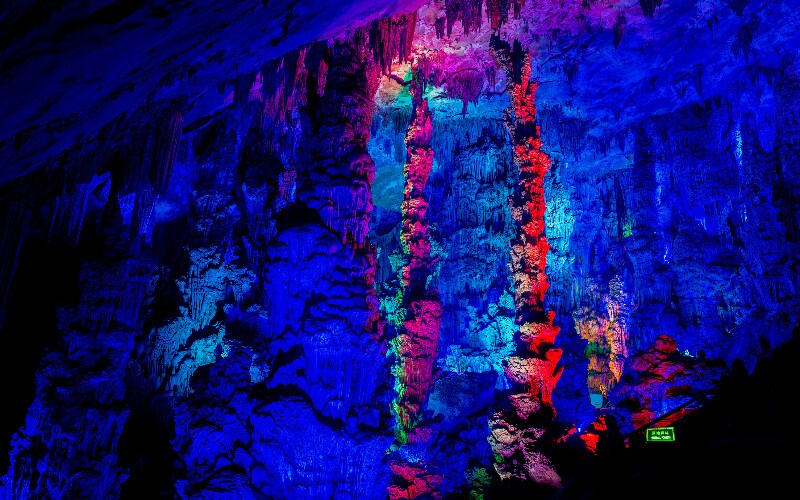 Reed Flute Cave — the Largest and Most Impressive Cave in Guilin

Reed Flute Cave (芦笛岩, Ludi Yan /loo-dee yen/) is a fascinating gallery of natural sculptures (limestone cave formations), now enhanced by multicolored lighting, which has been one of Guilin's many interesting attractions for over 1,200 years.

It rates as one of the top four tourist sites in the city. The cave got its name from a type of reed growing outside, which can be made into melodious flutes.

Limestone formations: The cave is filled with a large number of stalactites, stalagmites, and rock formations in weird and wonderful shapes. Illuminated by the colored lights, the cave looks like a dazzling underground palace. That's why the cave is also known as 'Nature's Art Palace'. The most liked formations are Rose Dawn over Lion Peaks and Crystal Palace.

Historic inscriptions: Inside the cave there are more than 70 inscriptions written in ink, which can be dated back as far as 792 AD in the Tang Dynasty (618–907). These aged inscriptions tell us that it has been an attraction in Guilin since ancient times. Millions of tourists have visited Reed Flute Cave since its official opening as a tourist attraction in 1962.

Lujia Village (鲁家村) is located at the banks of Peach Blossom River, on the way to the Reed Flute Cave. The village was renovated according to the prototype of North-Guangxi-Style folk houses. It is a good place to see the North-Guangxi-Style architectures and experience the local rural life.

Visit the Reed Flute Cave with China Highlights, on the way back to the city, stop by Lujia Village for a free visit. There you can get a better understanding of the Chinese architectures with the explanation from our tour guide. If you like, enjoy a cup of coffee to spend the leisure afternoon there.

Our Most Popular Guilin Tours Including Reed Flute Cave

China Highlights is based in Guilin, and we know tourism in Guilin better than anyone else. We have designed a dozen of Guilin tours to help our customers take advantage of their stay in Guilin. Here are some sample tours for your reference:

The above are sample tours. They can be modified according to your interests and requirements. We are glad to create a tour which is unique for you.