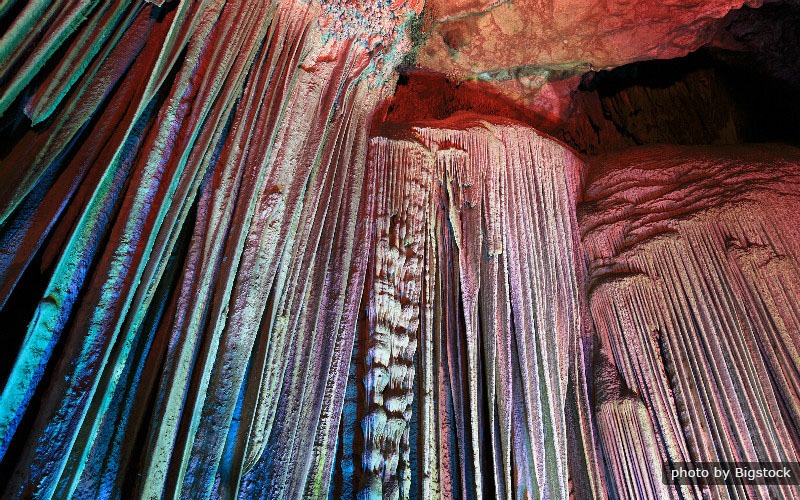 Crown Cave's giant subterranean river cavern resembles an ancient imperial crown, through which a subterranean stream runs and then joins the Li River.

In this well-developed tourist attraction there are more named scenic spots than anyone but a trained tour guide can remember. Half a day is enough to see it, but you could spend a leisurely day there seeing everything it has to offer.

As night falls a grand art performance is held at Cloud and Mist Mountain Villa, during which passionate ethnic minority people sing their mountain songs and dance hand-in-hand around a bright bonfire, welcoming visitors to participate.

The Four Portals of Crown Cave

Crown Cave is accessible by light rail train, boat and sightseeing elevator. The famous traveler, Xu Xiake from the Ming Dynasty, visited Crown Cave as early as 1637, and he gave the first detailed description of the cave in his travel diary.

Crown Cave is composed of four portals, accessible to visitors by raft.

The first portal (or the Outer Cave) is 10 meters tall, from the roof of which strangely-shaped stalactites and stalagmites hang, illuminated by lights with a glittering golden glow. On the right side of the first portal stands the Sightseeing Platform, with poems engraved on it.

The second portal is lower than the first one, and is flooded with water during the high water period. It is accessible by raft or subterranean railway in late summer and autumn.

The third portal is the lowest among the four portals in Crown Cave. The fourth portal is the most impressive with sands and shoals, where the stalactites and stalagmites are grotesque in shaped and gaudy in color, just like a subterranean crystal palace.

You are highly recommended to take a Li River Cruise with China Highlights and visit Yangshuo following your visit to Crown Cave.