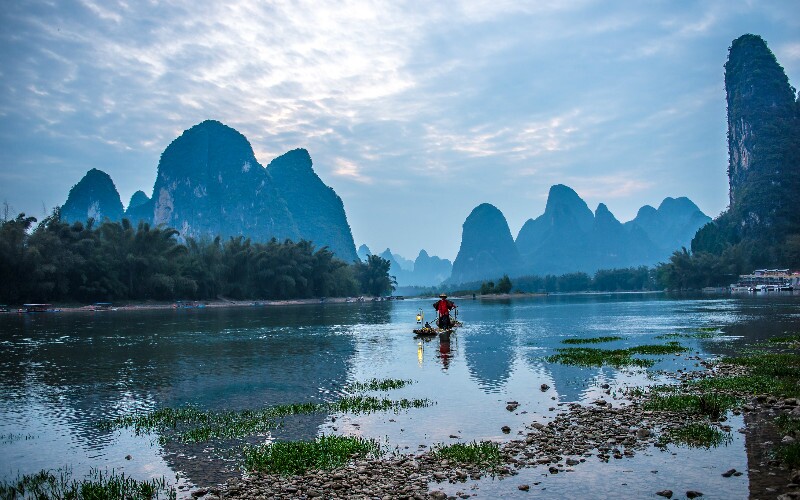 Guilin people say with pride that "Guilin scenery is the best in the world". Guilin is famous for its karst landscape - if you arrive in Guilin by train or car, the first impression you will have is seeing the karst hills in varied shapes and sizes. Unlike grand mountain ranges, Guilin's karst hills are pretty with unusual shapes.

Here, we have recommended the top 10 karst hills in Guilin. Just read below for information about visiting them.

Elephant Trunk Hill is the symbol of Guilin. It looks like a huge elephant stretching its trunk and drinking water from the Li River. The arch of the "elephant's trunk" was carved by water erosion. The arch is called Water Moon Cave because when seen with its inverted reflection in the water, it forms the shape of the moon.

It is best to visit Elephant Trunk Hill in the early morning. At about 6am to 8am, you can climb up the hill together with exercising locals. Generally, it will only take about 10–15 minutes to reach the top. Alternatively, you can just stand in the distance to take some photos.

Nine Horses Fresco Hill stands on the most scenic stretch of the Li River and you can visit the hill during your Li River cruise. The side of the hill facing the river looks like a huge screen and the pattern on the rock looks like a picture of nine horses.

However, most people cannot find all nine horses. The legend says that the more horses a person finds, the smarter he/she is. So, would you like to take up the challenge?

When you take a cruise from Guilin to Yangshuo, the hill will appear on your right.

After visiting some fantastic karst hills in Guilin, Xianggong Hill doesn't seem as eye-catching. However, the hill is one of the best places to enjoy a bird's-eye view of the Li River. If you like photography, the hill is an excellent place for you to create some masterpieces. A sunrise, rosy clouds, the river, and karst hill scenery can be your best models.

Folded Brocade Hill got its name from the rock on the hill, which is colorful like a folded silk brocade.

Capturing wonderful hill and river scenery, the hill is a popular attraction for travelers, especially photographers. There are several pavilions on the hill, which are also great places for taking photos. The Folded Brocade Pavilion is the best place to shoot the scenery of folded brocade rocks. In River-Watching Pavilion, you can take pictures of the two rivers and four lakes.

Resembling Chuanshan Hill, there is a large and round pierced cave in the hill that looks just like a moon. If you visit Moon Hill in a car, you will see the "moon" change in turn from a crescent to a half-moon, to a full moon, and finally a crescent again. It is a unique sight.

You can climb 800 steps to the moon cave, which is 50 meters in height and is very broad. The hill is also an attractive natural rock climbing site with 14 different routes.

Fubo Hill is an isolated peak standing on the bank of the Li River. It is named after General Fubo who marched there about 2,000 years ago. The Sword-Testing Rock on the hill is a rare stone suspended from the ground. The legend states that General Fubo cut the rock in two to test his sword. Actually, it was formed by water erosion.

The hill also has caves and historical pavilions with ancient inscription tablets and Buddhist statues.

Chuan Shan means 'pierced hill' and got its name because the hill has a pierced cave in its main peak. In legend, the cave was shot through by General Fubo. In fact, the wonder was formed by the bow of nature and the arrow of water.

There are over 30 caves in the hill and the most characteristic one is Chuanshan Cave. Countless stalactites fill the cave and glittering crystals cover the stalactites, just like white flowers growing on stones.

You know why it is called Camel Hill when you see it for the first time as the hill looks just like a camel. You can clearly define its head, neck, and hump.

The hill is an isolated peak in downtown Guilin and is known as "the column in the southern sky". At dawn or dusk, Solitary Beauty Peak looks like it is dressed in a purple robe that's decorated with golden thread.

Visitors can climb 306 steps to reach the peak, which is the best place to admire the whole of downtown Guilin. The hill also preserves some of the oldest historical relics. If you are interested in Guilin's history and culture, visit the hill to see some stone inscriptions and let your guide tell you some stories.

Old Man Hill is one of the highest hills in Guilin. Looking at it from a southeast direction, the "old man" has a kind expression and is wearing a hood and a mantle.

Guilin's karst hills are suitable to visit all year round but may provide different sceneries and activities in different seasons.

Guilin's scenery combines karst hills and rivers. In spring and summer, more rainfall brings more water to the rivers, making the best scenery. The period is also the best time to admire the karst hills along the Li River.

Autumn has less rainfall. Although the water flow is less, it is a good opportunity to climb the hills.

Winter is relatively cold but the scenery is still beautiful. The winds are stronger so be prepared for this if you are going to climb some hills.

Visit Guilin's Karst Hills with Us

Visit Guilin with us!

We are based in Guilin and many of our staff are locals from Guilin. No one knows Guilin better than us. With our private tours, you can travel with a guide who speaks your language and have a private vehicle. You can freely select what attractions you want to visit and can modify your plan, even during the journey.

You may refer to these sample itineraries and note that all itineraries can be customized:

You can also check more Guilin trips or try to create your own tour.