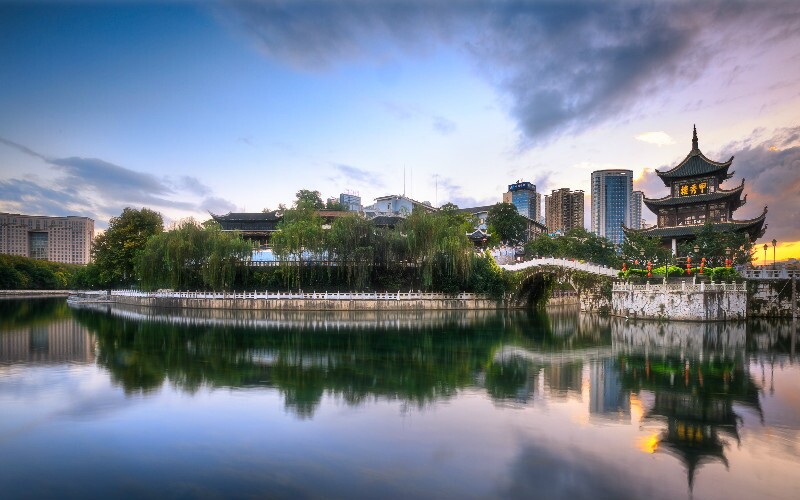 Jiaxiu Tower is a magnificent, three-story pavilion about 20 meters high. Its turned-up eaves and white stone pillars are well carved and preserved. Located on the water and connected to the two banks of the river by the Fuyu (Jade Floating) Bridge, the tower has green tiles, red pillars, engraved windows and white stone parapets, creating a superb and memorable impression. By ascending the tower, visitors can enjoy a nice view of the surrounding scenery.

The tower has a long history. Between 1573 and 1620, during the Ming Dynasty (1368–1644 AD), the local ruler Jiang Dongzhi ordered a causeway built where the tower sits today, to create a link to the southern bank of the Nanming River. Later, a pavilion was built to honor the first scholar of the time, in the hope of encouraging more scholars to follow his example. Thus, the tower was named "Jiaxiu Tower", which means "First Scholar's Tower". In 1621, the original pavilion burned down and the local leader of the time rebuilt it. In 1689, the tower was destroyed again, before Emperor Tianwen rebuilt it. So far, the tower has been reconstructed six times. For 400 years, it has been symbolic of Guiyang city and has witnessed the city’s history, as well as its ongoing development. Inside Jiaxiu Tower there is a good collection of authentic works and paintings from ancient calligraphers. The most famous is the couplet written by Liu Yushang during the Qing Dynasty. This consists of 206 words, with 87 words in the first and second lines, respectively; or 26 words more than the "longest couplet" preserved in the Big Guan Tower in Kunming. Liu’s couplet is notable not only for its length, but also for its value to literature. Its choice of words is so delicate and magnificent that it penetrates not only the history of the tower, but also the universal plight of human beings.

Supporting Jiaxiu Tower is Fuyu Bridge, made of white stone and well-engraved parapets. From a distance, the bridge looks like a dragon floating in the river.

The night scene at the tower is the most impressive. Colorfully decorated with lanterns, the tower is reflected in the water and looks so beautiful that people may feel as if they had been transported back to ancient times.

China Highlights can help you customize a tour to visit Jiaxiu Tower and other highlights in Guiyang.