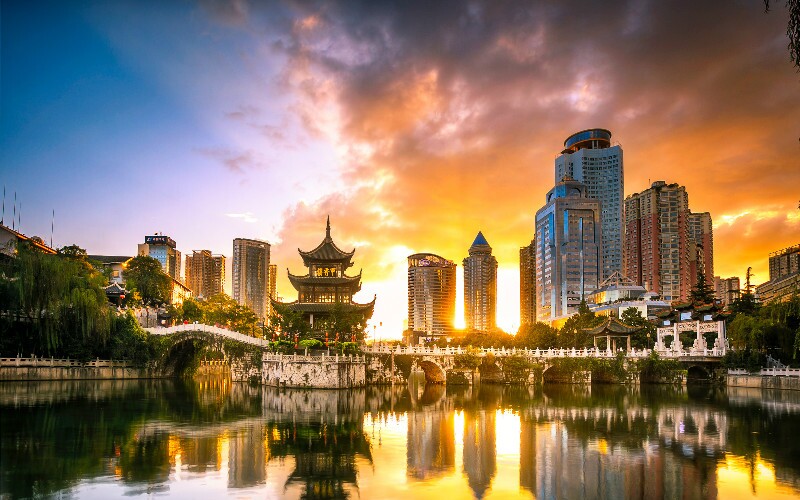 Facts About Guiyang - Things to Know Before Traveling to Guiyang

Guiyang is the capital of Guizhou Province, and is a transportation hub in southwest China. It is located in the mountainous area on the east of the Yunnan-Guizhou Plateau, at an altitude of 1,100 meters. It is about 660 km south of Chongqing, and 460 km northwest of Guilin.

Although Guiyang is not a famous international tourist destination, and maybe not as spectacular as other tourist cities, it has a lot of interesting things to be explored.

If you are looking for a taste of change, or a change of taste, find out some facts about Guiyang. You may end up planning a trip there.

In November 2004, China's State Forestry Administration awarded Guiyang the title “National Forest City”. It has forest coverage of over 46.5%, with 11 forest parks, and was the first city in China accorded this honor. With its good climate, Guiyang has verdant vegetation all year round.

Forests build up an ecological protective screen, and significantly enhance the air quality in the city. In 2018, Guiyang’s air quality ranked 9th of all Chinese cities.

2. Guiyang Has a Cool But Rainy Climate

With its relatively high-altitude location and high forest coverage, Guiyang’s climate is pleasantly cool. During summer, the average temperature is only 23 °C (73 °F), and the temperature seldom exceeds 30 °C (86 °F). This pleasant weather makes Guiyang an ideal summer resort.

Guiyang, however, is also a city with lots of rainfall, and the rainy season may last for half a year. Its annual rainfall can reach 1,200 mm, with relative humidity around 76%-80%. During the rainy season, spring and summer, rain gear is necessary. Even in autumn and winter, carrying an umbrella is recommended.

In ancient times, Guiyang’s cool and wet climate could easily lead to illness. In addition to medicine, Guiyang people found their own way of dealing with this – by eating spicy food!

Many decades ago, salt could not be locally produced and was difficult to import to Guiyang, but the mountainous local geography was suitable for planting chili pepper. As time passed, eating spicy food became a local tradition. Other strong-flavored food, like sour and pickled food, are also loved by local people.

Find out more about Guiyang food.

Have you ever visited a time tunnel, transporting us from ancient dynasty to modern city? Such a tunnel exists in Guiyang.

In the city, people can admire ancient buildings from the imperial dynasty era or the world wars.

Qingyan Ancient Town, in a southern suburb of Guiyang, was built more than 700 years ago, and you can still recognize elements of design from that era. Other places, like Jiaxiu Pavilion, Cuiwei Garden and British Villa, will also take you back to past times.

After a day of visiting, it is time to go through the tunnel and enjoy some night life.

How about letting your guide take you to a night market to taste some local snacks, or to a western restaurant for some of your own country’s tasty food. Or just admire the night view from a riverside café. Coffee or rose tea?

In the past, Guiyang always left the impression of being under-developed, but things have changed in this new century. High-tech industry has become a new economic focus for Guiyang, with its nice climate and rapidly improving transportation system.

In 2015, a massive national data center was constructed in the new district between Guiyang and Anshun. Since then, various world-famous enterprises have established centers in the district, including Google, Intel, Microsoft and Apple.

Are you also curious about Guiyang’s future?

6. Guiyang Is a Tourist Hub in Southwest China

Located in a mountainous region, Guiyang’s transport used to be slow and cumbersome. The transportation system, however, has developed very quickly in recent years.

Guiyang is generally the first stop for travelers in Guizhou. The city provides inexpensive access to minority cultural attractions and natural highlights of the province. Depart for Kaili and start your journey to lots of interesting ethnic minority villages, such as the largest Miao and Dong villages, a batik village or a short-skirted village.

As air and rail transportation are becoming more convenient, it is easier to reach Guiyang from other major cities in China, like Beijing, Shanghai and Hong Kong, as well as some cities in East Asia, like Singapore and Bangkok…

It is also easy to arrange a tour from or to other destinations in China, such as Zhangjiajie and Guilin.

You may not stay too long in Guiyang, but the city can be quite impressive. Check out our 6-day Guizhou trip, including Guiyang day-tour for a day’s exploration of the city, or just select it as a transfer stop on your Guizhou tour:

Feel free to check our other tours for reference. All itineraries can be customized. Or create your own tour.