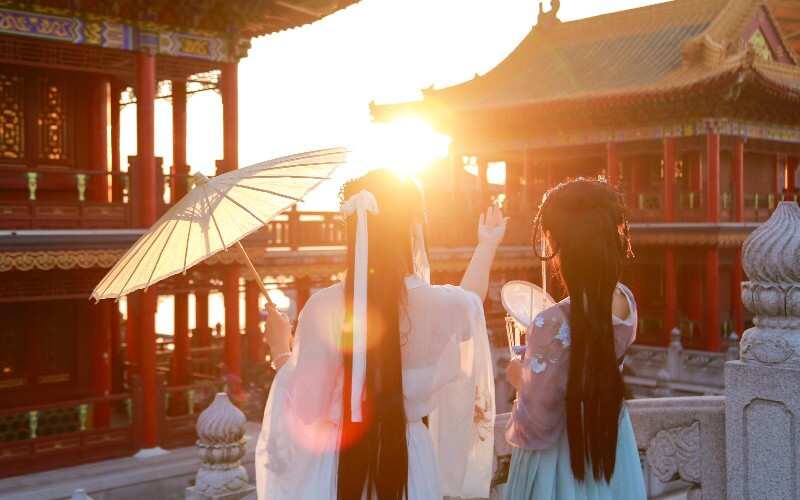 Opened in 1996, Hengdian World Studios, which is known as China’s Hollywood, is the world’s largest film studio. It is located in Hengdian, a township about a 2½ hours’ drive south from Hangzhou, and about 4½ hours’ driving from Shanghai.

As Zhang Xianchun, the chief designer of the studio and designer of the Opium War props and Guangzhou Street, said: “For today’s Hengdian World Studios, film and television are just the instruments. Tourism is the goal and culture is its soul.”

The 5 Best Things to Do in Hengdian World Studios

Cultivated from acres of farmland, Hengdian World Studios has been grown into a remarkable size, covering an area of 3.3 sq km (1.3 sq mi).

In this largest live-action shooting base, you can:

The Qin Palace shooting site represents the magnificent imperial palace of the Qin Empire (221–206 BC). There are 27 imitation halls and various side halls, building gates, and palace gates in the Qin Palace Scenic Area. It is famous for its huge scale, complex shape, and rigorous layout.

The Palace of the Ming and Qing Dynasties truthfully reproduces the buildings and lifestyles of the Ming and Qing dynasties (1368–1912). You can see imperial palaces, imperial gardens, mansions of princes, government offices of feudal China, hutongs, and folk dwellings at the site. This is where hot films and TV series were filmed, such as Curse of the Golden Flower, War and Beauty, The Legend of Zhen Huan, Story of Yanxi Palace, and Jade Palace Lock Heart.

The Guangzhou Street · Hong Kong Street base, the birthplace of Hengdian Film and Television, represents the scenery of Guangzhou and Hong Kong around 1840.

The Qingming Shang He Tu set was built combining the social background, folk customs, and folk living style of the Northern Song Dynasty (960–1127). You can see the ancient architectural characteristics of the Song Dynasty.

New Yuanming Garden is a 1:1 reproduction of the original Old Summer Palace in Beijing.

2. Have Fun in Dream Valley

Dream Valley is a large-scale film-and-TV-experience nighttime theme park, simulating various natural phenomena such as volcanic eruptions, torrential rains and flash floods. If you go in Summer (July–August), you should not miss the aquatic park in the valley.

Each studio offers you different dress-up experiences. You can rent a costume of the Han, Tang, or Qing dynasty (men’s and women’s available) or a qipao for pictures. There will be one that suits you best!

There are many hotels in the film bases, perfectly integrated with the studios. The hotels and rooms are decorated based on the classic film and television scenes filmed in Hengdian, making your hotel environment just like in the movies.

If you only have one day, a one-day combined ticket to Ming and Qing Palatial Garden, Qin Palace, and Guangzhou Street · Hong Kong Street is recommended or you can also consider any other three bases.

The bases are all big, and it may take you 2–3 hours’ walking to see one base. Besides, there are about 3–4 performances in each base per day at fixed times from 8:30am to 4:30pm. There are more than 100 street shows in the whole studios.

It might not be easy to arrange your valuable time to see all the bases and shows you want to. This would be not a problem in a well-designed guided trip. Your experienced guide will help you to get where you want to be right on time. Contact us for a guided Hengdian World Studios tour.

From getaway and vacation stays to business travel, from 3 stars to 5 stars, from chain hotels to local characteristic B&Bs to film-set-themed boutiques, accommodation variety in Hengdian World Studios has never been a problem! For convenience, we suggest you stay in or near a base.

The unfailingly recommended hotels are:

Contact us to inquire, book, or for more hotel choices.

The bases are mainly concentrated in the north and south of Hengdian Town, from which they are about 7 km or 15 minutes’ driving. Shuttle buses are available between the bases.

How to Get to Hengdian World Studios and Travel Around

Hengdian World Studios is located in the Hengdian Township of Dongyang Prefecture. It takes less than 4 hours’ travelling time to get there from Jiangsu, Zhejiang, Shanghai, Fujian, and Jiangxi. You can get close to Hengdian, i.e. to Hangzhou, by air and trains.

Travel from Hangzhou to Hengdian

Hengdian is about 160 kilometers or 2½ hours’ driving from Hangzhou.

Travel from Shanghai to Hengdian

Hengdian is about 330 km or 4½ hours’ driving from Shanghai. We can arrange a flexible direct private transfer for your comfort.

Or you could take a buttle train (about 1 hour) to Hangzhou, then have a private transfer from a Hangzhou train station to Hengdian (about 2½ hours).

Travel from Yiwu to Hengdian

Hengdian is about a 1½-hour drive from Yiwu city.

As there is no airport or train station in Hengdian, you could also fly to Yiwu or take a train to Yiwu first. Contact us for a private transfer to Hengdian from Yiwu.

Hengdian is a small town, and you can take a taxi, tourist buses, or special local rickshaws and small vehicles to get around. Travel with China Highlights and your guide could help you to experience the local transportation without any communication problems.

1. When is the best time to visit Hengdian World Studios?

Hengdian World Studios is suitable for touring all year around. Spring (March–May) and autumn (September–October) are usually taken to be the best times, with moderate temperatures, neither too hot nor cold.

In the spring, the flowers at Qingming Shanghe Tu, Guangzhou Street · Hongkong Street, and Palace of Ming and Qing Dynasties bloom, and you can take beautiful pictures. In autumn, the weather is basically sunny and clear, and very conducive for your travel.

2. Is it easy to find food in Hengdian?

Yes. You can enjoy food in a hotel, eat in the convenient on-base restaurants, and enjoy street food. Kangzhuang Road and Wansheng Street are famous food streets. In Hengdian, you can taste the different flavors from different regions all over China.

3. Can I bring food/drinks or cameras onto the bases?

Please do not bring food and drinks into any of the parks.

Also, please do not bring professional cameras, photography/filming equipment, drones, or other aircraft into the parks.

4. Will what I want to do always be available?

In the event of a force majeure such as rain, heavy snow, etc., Hengdian World Studios may temporarily change, delay, or cancel some operations and performances.

Due to the maintenance, the amusement projects in the park may be suspended.

Contact us to inquire about the availability of what you want to do.

Explore Hengdian World Studios with Us

You may want to see this 2-Day Hengdian World Studios Weekend Getaway for inspiration.