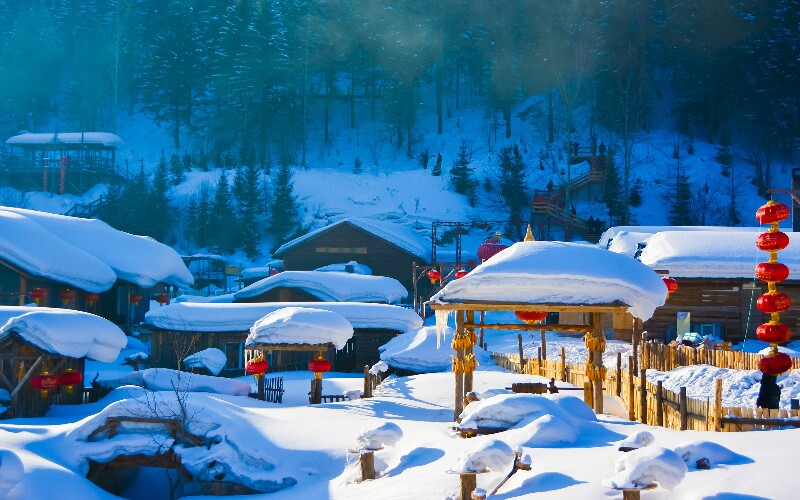 Harbin is in China's northernmost province, bordering Russia and North Korea. Due to its position as a provincial capital and its important geographic location, the government is developing the city's transportation infrastructure to make it a major international transportation and business hub for China, Korea, Russia and Japan.

Harbin is only two hours from Beijng by flight, or eight hours by bullet train. Harbin Taiping International Airport is about 45 minutes' drive from the city center. Overall, you'll find that Harbin's air travel, rail, and highway systems allow for fairly inexpensive, modern, and rapid transportation.

Harbin Taiping International Airport is about 32 kilometers or about 20 miles from the central Daoli district where the major tourist highlights are, such as Central Street and Saint Sophia Cathedral. It is the second largest international airport in northeast China.

As the transportation hub of Northeast China, most cities have flights to Harbin, such as Beijing (2 hours), Shanghai (3 hours), Guangzhou (4 hours), Chengdu (3½ hours), Shenzhen (4 hours), and Hangzhou (3 hours).

As a major railway transportation hub in Northeast China, Harbin is easily accessible and well-connected by train from most major cities in China.

It is very convenient to get to Yabuli Ski Resort from Harbin. Yabuli is only about 3 hours' drive by car from Harbin city center.

Yabuli has three railway stations, all with trains from Harbin. The journey takes about 1½–3½ hours.

Harbin Daowai Bus Station and Harbin Nangang Bus Station have long-distance buses to Yabuli Town, taking about 3½ hours. From there, you'd need to take a minibus or a taxi to the ski resort.

Located quite far away in Shuangfeng Forest in Hailin County, Mudanjiang City, there are three ways to travel from Harbin to China Snow Town.

There is no direct train from Harbin to China Snow Town. You will need to take a train to Yabuli or Mudanjiang first and transfer to a tourist bus from there.

Bullet trains leave Beijing for Harbin each day, and the trip takes about 8 hours. There are also overnight trains between Beijing and Harbin that leave in the afternoon and arrive early the next morning.

You could also choose the high-speed train. It will take about 12½ hours.

A direct flight from Guangzhou to Harbin takes about 4 hours. There is no bullet train running between Guangzhou and Harbin. If you choose an overnight train, it will take around 35 hours.

The public transport system in Harbin city is well developed, with over 100 bus routes connecting nearly all parts of the city. There are two special tourist routes running past tourist attractions.

One departs from Flood Control Monument (Stalin Park) and terminates at Sun Island Scenic Spot. The other passes several tourist spots in the city center. The cost for a public bus ticket is 1 or 2 yuan per journey.

There are several types of taxis, and the cost depends on the type you use, but the price difference is small. Usually, the flag down price is 8 or 9 yuan for the first 3 kilometers, and then no more than 2 yuan for every additional kilometer.

When you travel by taxi, make sure that the driver turns the meter on or that you negotiate and agree on a price beforehand. If you don't, when you arrive, they are likely to charge their own prices.

Also, prepare some small bills, because the drivers are reluctant to break a 100-yuan bill, or sometimes you may get fake money for change.

In winter, due to the freezing cold weather, taxis are in tight demand, so the taxi driver might pick up some other passengers along the way. There is no need to worry about it. You simply need to take care of your belongings and your own journey and fare.

From the airport or the train station, it is better to take a taxi that is waiting in the official taxi waiting line to avoid problems.

To travel across Songhua River to Sun Island, you can choose the cable cars. The cableway is 1,156 meters in length starting from Tongjiang Street (south bank) to Sun Island (north bank).

The whole cable car journey takes about 6 minutes and costs about 50 yuan per person. It is a great way to cross the river and have a bird's-eye view.

To go to Sun Island Park area, Siberian Tiger Park, and Grand World of Ice and Snow, visitors can also choose to take a ferry when the river is not frozen solid. There are ferries between Sun Island and the city center area.

Every year the operation period of ferries is usually from April 20 till November 10, depending on the river conditions. Every day from 07:00 to 17:00, there are 3 ferries from docks at Jiuzhan (九站), Tongjiang Street (通江街), and Flood Control Monument (防洪纪念塔) to Sun Island. A single ferry ride takes about half an hour.

Transportation from Harbin to Vladivostok

There is one long-distance bus from Harbin (China) to Vladivostok (Russia), which leaves at 07:00 every day. It takes about 12 hours from Harbin to Vladivostok, covering a distance of more than 750 kilometers (470 miles). Tourists need to pay 500 yuan for a ticket, and passports are needed to get on the bus.

Want an ice and snow experience this winter? See our popular Harbin tours for inspiration:

All our Harbin tours are customizable. Contact us if you have any questions or other requirements. 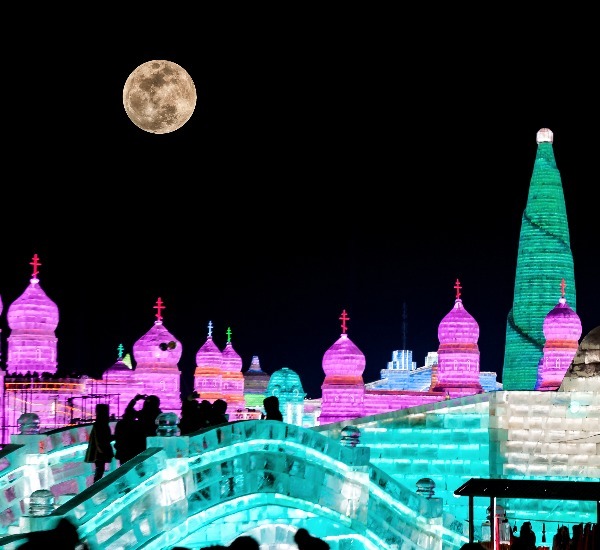