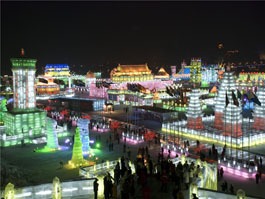 This ice "city" is just a part of the Ice and Snow World.

Weather: January is the coldest month of the year, and it's the time for the winter festival extravaganzas and winter sports that Harbin is known for. It is freezing, cold and dry though it snows sometimes. The average nightly low temperature is -24 °C (-11 °F), and the average daily high temperature is -13 °C (9 °F).

There is a big temperature drop from day to night of 11 °C. It snows about 6 days a month, but the total precipitation is only about 8 mm. Though it is freezing, it is actually fairly humid, and usually sunny. Check the Harbin weather and forecast>>

Clothing: Bring warm clothes such as a thick coat, gloves, extra layers of underclothes and a hat or thick scarf. You'll need shoes with good traction for the snow and slush. Read more about keeping warm in Harbin.

Things to Do in Harbin in January Harbin International Ice Sculpture Festival: The gigantic and brightly colored multistory ice constructions at Sun Island Park are famous in the country. People can walk around in them, slide down them, and even dine in. The Harbin International Ice Festival only started about 15 years ago, and it is one of the biggest ice and snow festivals in the world along with the famous ones in Sapporo, Norway and Quebec.

It is an international festival and competition. As the festival grows and as China's economy grows, the size of the ice architecture exhibits keeps growing. The work is astounding, and their size and beauty is amazing. Tens of thousands of people labor on the real sized displays that tower 50 meters high and are technologically sophisticated displays of light and color. Harbin is called “Ice City,” and the winters are bitterly cold, but the conditions are right for the ice festival.

Grand World of Ice and Snow: Simultaneously with the ice sculpture festival, there is a gigantic snow sculpture and snow sports festival held nearby. It is so big you might get lost. You'll see snow sculptures longer than two football fields that might set world records. Like the ice constructions, these are also technologically sophisticated displays that use computer controlled LED and laser lights for stunning displays at night. Enjoy the Chinese New Year: The (Spring Festival) holidays make the already popular Harbin Winter Fest even busier days for travel and tourism. For the holidays, most people get a "golden week" of vacation, and this vacation period is at the end of January 1/3 of the years. Enjoy a snowy and icy Chinese New Year then with fireworks, feasts and holiday treats. Check Chinese New Year dates

Tourism increases much more in Harbin in January than in most Chinese cities. A great number of visitors want to see the Winter Festival attractions. The travel rush begins about a week before the Spring Festival "golden week" and ends about two weeks after it. The city is high on the list of domestic winter travel destinations, so Mainlanders crowd in during most of the CNY season.

In Harbin there is even more of a tradition of family reunions and rest than in other cities. So be aware that for four or five days from Chinese New Year, Harbin is subdued since the locals will be home with family or with friends. Many stores, restaurants, and some attractions in Harbin and the surrounding areas might be closed or have a reduced schedule. So it is best to do a little schedule checking and planning.

Be prepared for crowds if you come during these holidays. Prices are generally high for hotel rooms, flight tickets and train tickets.

3-day Ice and Snow Fest Tour: We'll pick you up and help you settle into your hotel. Then we'll go to both the Sun Island Ice Sculpture site and the Snow Festival site. Then we'll help you on your way. You can modify your tour. How to Plan a Trip to Harbin Top Things to Do in Harbin