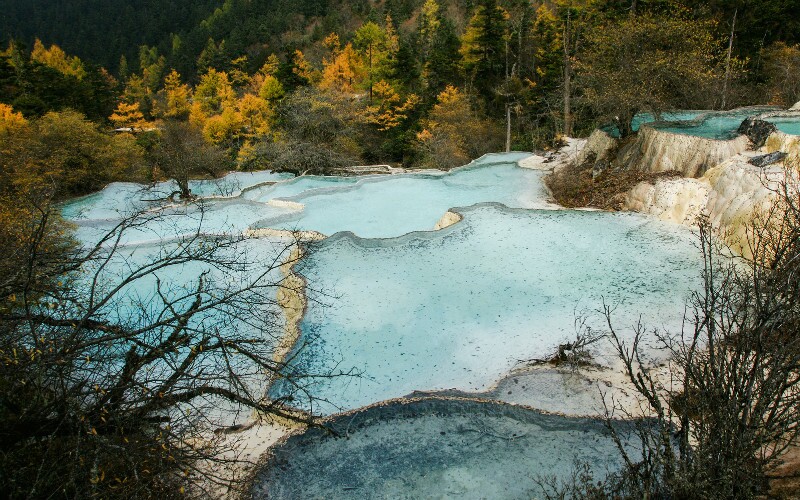 Huanglong Travel Guide - How to Plan a Trip to Huanglong

Huanglong Scenic Area (黄龙景区) is famous for its colorful lakes, snow-topped mountains, beautiful valleys and virgin forests. The area, declared a World Heritage Site in 1992 by UNESCO, has been called a "World Wonder" and “Fairy Land on Earth."

Huanglong, which means 'Yellow Dragon', got its name for its special geographical features. Seen from a distance, Huanglong's numerous travertine formations look like an enormous, golden dragon arching across the valley, winding its way between the snowy mountain peaks.

One of Huanglong's most defining features, travertine is a type of limestone deposited by mineral springs, formed by the precipitation of calcium carbonate. Over time, the water in Huanglong has become separated by walls of this deposit, and it birthed the thousands of mineral ponds and lakes that cover much of the park. Even the waterfalls cascade over thick layers of the golden limestone.

The water in many of these pools is so crystal clear that you can see the bottom with your naked eyes, and the turquoise color gives the “yellow dragon" of Huanglong valley a smattering of aqua scales.

There is saying that people who came from Jiuhaigou and Huanglong have no need to appreciate the beauty of water in other places. It's difficult to describe the unbelievable beauty of Huanglong to someone who has not seen it.

Huanglong is in the eastern foothills of the Qinghai-Tibet Plateau, in the Minshan mountain range, where it sits at the foot of Mount Xuebaoding, the highest peak. The area is home to the endangered giant panda and golden snub-nosed monkey.

The area is 300 kilometers (186 miles) from Chengdu, and 144 km (89 mi) by road south from Jiuzhaigou. A shuttle bus runs from Jiuzhaigou to Huanglong and back during certain times of day. Check ahead for bus times.

Other buses run from Huanglong Airport and Chengdu.

You may also take a taxi. It's about a four hour drive from Jiuzhaigou and may be faster than the shuttles.

A tour of Huanglong is often included in the seven day tours of Jiuzhaigou, which run out of Chengdu. There is also horse trekking tour out of Songpan, which is about 56 kilometers (35 miles) away.

Peak season is from April 1 to November 15. In off-season admission is discounted. Children, students, and seniors may receive a discount during peak season with ID. Huanglong is open from 8 a.m. to 5 p.m.

For warm weather, the best months to visit Huanglong are during its peak season. Huanglong T emple Fair is held in the middle of the sixth lunar month, which usually falls in July.

But with the fall hues around them, each pond and lake in Huanglong is particularly picturesque in fall, when the pools take on the new colors of the changing leaves.

Winter, too, has a beauty unlike any of the other seasons, when snow and ice blanket the forests, temples and travertine. The unfrozen pools stand out brightly against the white, some green and some a blue the color of thick ice.

Aba Prefecture has mountainous land formations, which give it changeable weather. Be prepared for sudden drops in temperature if the wind and rain clouds roll in.

The weather in winter is cold and long, and it's cool and moist in the summer. It is misty in the morning and evening, and the rainy season is from May to August. The climate changes and cools vertically. In the high hills, it's moist and chilly. In the valleys, it's drier and cool.

For more detailed weather and climate information of a similar area, as well as what's good to do and see at what times, Jiuzhaigou is only 50 kilometers north of Huanglong, though much further by road.

Expect an all-day exploration of Huanglong national park, and to leave early in the morning. The boardwalk ascends 4 kilometers (2.5 miles), and a cable car runs up and down. A ticket can be purchased for either direction during peak season for those that don't want to ascend or descend on foot.

Come prepared with water, snacks, sunblock and comfortable shoes. Keep in mind the season and bring weather-appropriate clothing and rain gear. Food and drinks can be purchased at shops, but may be expensive, so you may want to bring your own. Restrooms are available, but there may not be toilet paper.

Be aware of the high elevation, and consider any physical or health limitations. To avoid altitude sickness, keep in mind:

A staple food of Tibetans, it looks like mainland China fried wheat flour, prepared with barley flour, as well as pea and oat powder. Tibetans bring the Zanba cake wherever they go, to farm, to graze and to travel. It is a convenient fast food and is especially welcome in sparsely populated and fuel-scarce areas.

Its main ingredients are yak butter and milk, as well as walnut kernel, peanut, sesame, egg and salt. The ingredients are stirred together, then mixed with boiled tea. After being stirred for a few seconds, a fragrant buttered tea is ready. It is poured into a big kettle and kept warm on a stove for drinking.