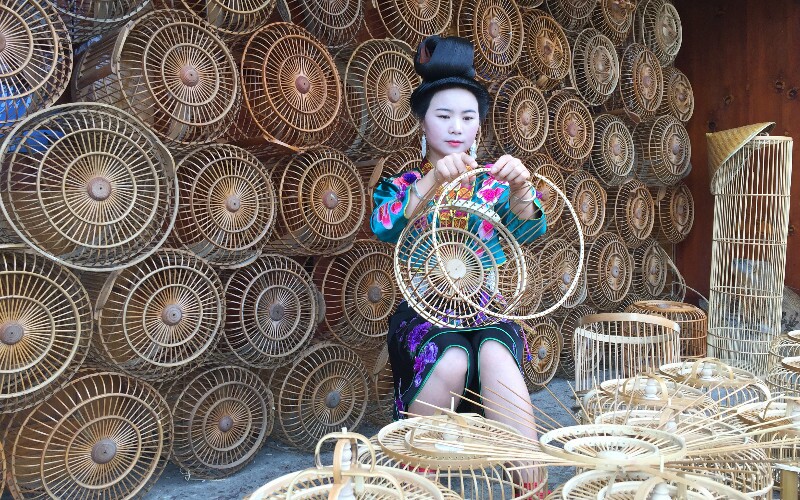 Exhibition Halls of the Museum

Kaili Ethnic Minorities Museum has a detailed introduction to the human geography and ethnic customs of minority people in Qiandongnan. The Museum has more than 12,000 items in its collection. Exhibits are displayed along with texts and pictures, showing the Dong and Miao people’s history during the Yuan (1271-1368), Ming (1368-1644) and Qing (1644-1912) dynasties.

The museum has 12 exhibition halls in total, but only five are open at present.

In the first exhibition hall on the second floor of the museum, the General View uses models, objects and pictures to give you a basic understanding of the political, economic and cultural situation in Southeastern Guizhou.

The Minority Features hall is regarded as the most significant exhibition hall in the museum. It introduces the culture of each minority in southeast Guizhou, including distinctive architecture styles, clothing and folklore.

The hall displays many items that are not commonly seen today, such as bamboo baskets for collecting food, mud cooking stoves and flags used in sacrificial ceremonies.

This hall mainly introduces the clothing culture of the Miao and Dong. It describes each step in clothing production, such as collecting silk thread, weaving cloth, dyeing fabric, embroidery and cutting.

It uses wax models to display several beautiful national costumes and scenes of people making clothes, which help you to understand better the creation of beautiful minority dress.

The highlight in this hall is a tin embroidery work. Tin thread is used in an otherwise traditional embroidery. This shows the superb embroidery skills of the Miao people living around Kaili.

Dragon boats are a kind of racing boat shaped like Chinese dragons. Dragon boat races are held all over China during the Dragon Boat Festival.

Each Miao dragon boat is made of a complete fir or sycamore tree trunk. The boat is generally 21-24 meters long and 0.7 meters wide. One large and two small boats connect to make a standard Miao dragon boat set. People paint beautiful patterns on the boats, representing the characteristics of different villages.

This hall displays representative handicrafts of each minority in Guizhou province, such as paper-cutting, weaving, embroidery and bamboo carving.

Besides exquisite handicrafts, beautiful paintings also feature in the hall.

The paintings come from modern minority painters, some of whom are farmers. They depict the happy lives and optimistic attitudes of ethnic minorities.

Here are the most popular Guizhou tours which include Kaili Ethnic Minorities Museum. We hope these can give you inspiration for your China-wide trip!

You can also arrange a private tour to Kaili Ethnic Minorities Museum with us. We can help you to tailor-make a trip which contains all the places where you would like to go. Contact us and create an excellent China tour now.