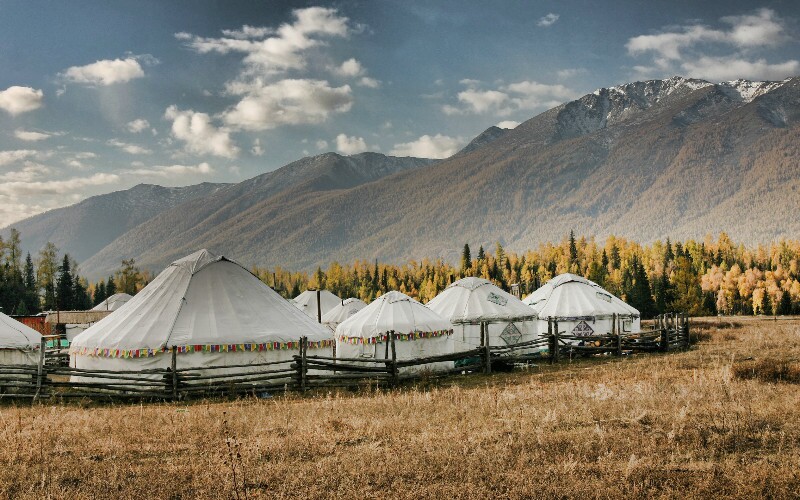 Tuwa Village on the south bank of the Kanas Lake is considered by China National Geography Magazine to be one of the six “Most beautiful towns and villages in China.” In Mongolian, Kanas means “beautiful, rich, and mysterious” and the breathtaking vistas are only one reason that makes people want to visit Tuwa Village.

Kanas Lake is near the Russian border at the northern reaches of Xinjinak. The lake itself is only 150 kilometers from Buerjin County. The lake is set in the mountains of Altay and is surrounded by forests and snow-capped mountains. The scenery resembles that of the Swiss Alps. The lake is said to change colors several times a day, depending on the location of the sun.

Tuwa Village is not polluted with technology and although there are no hotels in the village, the people are hospitable and it is possible to make arrangements to stay with a family. They live in Mongolian yurts or in timber huts built from pine. Due to the harsh winters and heavy snowfall, the roofs are slanted so the snow does not build up its weight and can slide off easily.

History of the Tuwa People

There are two different stories concerning the ancestry of the Tuwa. Legend has it that they are descendants of sick or disabled soldiers left behind by Genghis Khan when he invaded the west. Tuwa elders dispute this story. They say they are descended from Russians and their ancestors moved from Siberia to China approximately 500 years ago.

They claim the same heritage as people currently living in the Tuwa Republic of Russia. Indeed, their culture and language is similar to Mongolian herdsmen.

Tuwa live by herding and hunting. They raise horses, cows and sheep and live a nomadic life. In the spring and summer, they herd their animals to pasture land in the mountains. In the autumn, they return to their village where they prepare for the winter. They grow potatoes and other vegetables when the weather permits, but their main diet is meat and dairy products.

Until Kanas Lake opened as a tourist attraction in 1998, Tuwa Village was isolated. Even today, 95 percent of the people have never been out of their village and they maintain many of their original traditions. They have no written language and many of their customs and stories of their history are passed down orally from one generation to the next.

They have several celebrations a year including a Spring Festival, the Lighting Lantern Festival and the stone Group Festival. At these festivals, they express their gratitude to nature by ceremonies honoring fish, sky, trees and mountains. They also “pray for Buddha and chant sutra.”

Because their tradition forbids them to marry outsiders, their numbers have fallen sharply in the last 50 years. Even so, the young Tuwans fall in love and get married with wedding ceremonies usually taking place in autumn.

The festivities are similar to wedding festivities anywhere else and include music with everyone dressing in their best clothes. There is dancing and feasting and drinking wine. The new couple is given presents and then they move into their new cabin together.

When to Visit Tuwa Village

The best time to visit Tuwa Village is in the spring before the Tuwa herd their animals to higher pasture or in autumn after they have returned. In the spring, green grass covers the area and the wild flowers bloom.

How to Get to Tuwa Village

One way to get to Tuwa village is to fly to Urumqi City. Then, take a bus to Bu’erjin. Rent a van or jeep and drive to Tuwa Village. Another option is to take a plane to Kanas Airport. Then, travel by car or shuttle bus to Tuwa Village.

It is easy to lose track of the time in the summer when the sun doesn't rise until 9am and it is still light at midnight. Also, remember to bring warm clothes. Even on a warm summer day, it gets cool at night. It is also a good idea to take bottled water along any time of the year.