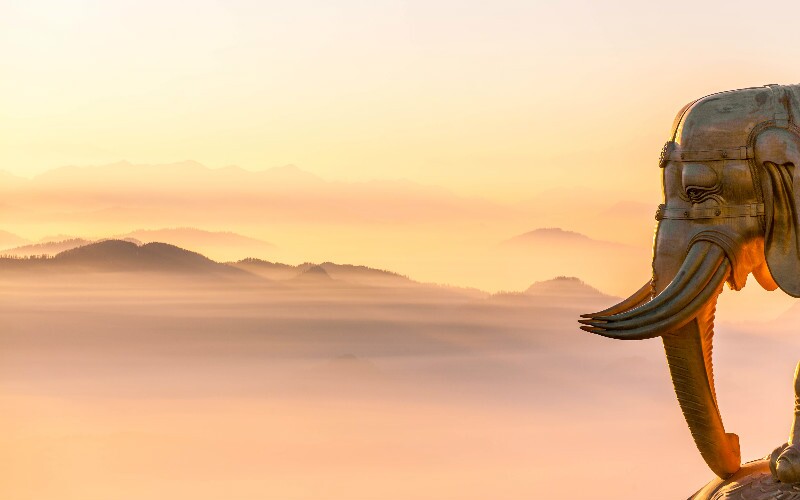 Mt. Emei in Sichuan Province in Southwest China is one of the most well-known summer destinations in China thanks to its pleasant weather, congenial atmosphere, the inspiring natural scenery and the influence of the Buddhist culture. The mountain is characterized by lofty ancient trees, impressive waterfalls, pristine brooks and numerous Buddhist temples. Mt. Emei is noted for considerable weather difference between various spots on the mountain. A 14 centigrade degree difference in temperature has been reported between the foot of mountain and its peak.

It's not uncommon for it to be blistering at the foot of the mountain and cool and pleasant higher up the mountain. The average temperature during July and August, the hottest period in China, is around 11.8 degree centigrade.

Mt. Emei is a natural "Oxygen Bar", where the average Negative Oxygen Ions in one cubic meter reach 0.1 million to 1 million which is 500-1000 times more than that in its city cousins.

Scientists have confirmed that adequate negative oxygen ions (10.000 or above in one cubic meter air) in air can motivate the metabolization of the human body to repel exhaustion, improve sleep, and prolong life. Mt. Emei is a sacred Buddhist haven. It is one of the four most divine Buddhism Mountains in China.

This Buddhist legacy mainly contained in the numerous temples and the buildings bears witness to the unusual historical role of the mountain in Buddhism development since the religion was introduced to China over 2,000 years ago.

The mountain enjoys great popularity among Buddhists in China. Every morning streams of Buddhism pilgrims armed with joss sticks conquer the steep stairs of the mountain and swarm into the countless temples.

The Mt. Emei not only provides physical space to travelers but affords a personal exposure to the intimacy of nature and China's Buddhism culture. A gnarled ancient tree, a winding stream, waterfall and a Buddhist temple will be a reminder of the resiliency of nature and pristine civilization. View famous mountains in Chna. The temple was built during the years of Wanli period in the Ming Dynasty. The horizontal tablet of "Baoguo Temple" was written by Emperor Kangxi of the Qing Dynasty. It is the place where the Mt. Emei Buddhist Society is located.

The whole temple is a typical courtyard house covering an area of more than 10 acres. Each courtyard has one view and the scenery changes as you go deeper and deeper, which is rather a spectacular scene.

The main hall of the temple built along the mountain has four layers with one layer higher than another, which presents a grand and natural appearance. The number of the Buddhist temples dotting the mountain is quite inspiring but the views from the Golden Summit at an elevation of 3,077 meters above sea level steals the glory.

The Gold Summit is an extravagance of natural wonders and Buddhism spiritualism, which comprise of four marvelous spectacles of Sunrise, Cloud Sea, Buddhist Light and sacred lamp.

The scenery of a red glowing sun dancing over the sea of clouds in the east is fabulous. A few lucky visitors will encounter the Buddhist Light which only occurs 14 times a year.

On these occasions, your shadow is cast before you in the mist and a colorfully glowing lights circle you as if you are attained enlightenment. Wanian Temple is one of the eight largest temples on the Mountain. The Brick Hall of the Wannian Temple is a wonder of ancient buildings. During the past four hundred years, it has gone through several earthquakes of magnitude 5 to 7.9 but it is still standing to this day. Hence, it is reputed as a miracle in the history of ancient architecture in China.

A highlight of the temple is a bronze statue of Puxian riding an elephant, which was cast in Chengdu by a Buddhist monk named Maozhen under an imperial order during the Song Dynasty.

The bronze statue has a symmetrical proportion with superior casting craftwork. It is 7.85 meters high and weighs 62 tons. What How such a huge objective was transported and placed on the mountain remains a mystery.

Qingyin Pavilion was built by a Tang Dynasty Buddhist monk, whose Buddhism spiritualism exists today around the mountain. The pavilion presents a fine natural picture with pavilions, towers, corridors exquisitely combined with waters and hills.

The Elephant Watching Pool has a height of 2070 meters above sea level. It has misty white clouds and ancient tall tress around. When the bright moon shines high in the sky in autumn, all is quiet with boundless pure light.

Looking up at the sky, you will feel like an immortal. The "Night Moon over the Elephant Pool" is the famous sight here. At night when the bright moon is high in the sky and moonlight is reflected in the pool, the water and the sky are in one color with serene and beautiful scenery. Mount Emei is a good place to hike. It has a high altitude of more than 3,000 meters. Hiking from the base of the mountain to the mountaintop enables you to see the different landscapes and to experience nature.

There are two common hiking routes: Mount Emei’s hot springs are some of the best in China. The hot springs there are radon hot springs, which are rare. The springs come from more than 3,000 meters underground and contain more than 10 kinds of minerals, such as radon, fluorine, hydrogen sulfide, and silicate, which are good for your health.

It is cozy to take a bath in a hot spring and to wash away the fatigue of the day. Lingxiu Hot Spring and Hongzhushan Forest Hot Spring are recommended. Monkeys on Mount Emei may be the best advocates for the mountain, attracting more attention than any other landscape or activity.

The monkeys are famous for their cleverness and naughtiness. They are not afraid of people and often interact with tourists.

You can see these naughty monkeys in Mt. Emei Natural Ecology Monkey Reserve, which is the largest natural wild monkey area in China.

Tips: There are many monkeys at Mount Emei. The monkeys are very cute, but please keep your distance from them. If you come across a "monkey tollgate", the standard procedure is to thrust open palms towards the outlaw to show you have no food.

Mount Emei Ski Resort was built in 1998 and was the first ski resort in Sichuan. The ski resort is famous regionally for its profuse forests, natural beauty, decent pistes, and skiing training facilities. It is a well-equipped spot with ample alpine skiing and rental facilities.

Mount Emei is a good place to see autumnal leaves. The mountain puts on a show of glorious colors in autumn. Red leaves are all over the mountain but some spots offer better views than others. Some of the best places to catch the gorgeous scenery include Wannian Temple, Xixiang Chi, Leidongping, and the Golden Summit. Mount Emei offers a different view in each season and is suitable for visiting all year round. However, the best times to visit are spring and autumn because these two seasons offer the most beautiful views.

Spring is the season of azaleas, and colorful azaleas will spread all over the mountain. The Buddhist Ceremony of Mount Emei is held from March to April. During the ceremony, tourists can appreciate the sight of thousands of lamps that are lit to worship Buddha. It is also a great time to taste Mount Emei’s fresh tea.

Autumn has the most beautiful scenery. The whole mountain is covered with glittering red leaves. From the middle of September until the end of October, the leaves on the mountain turn from green to yellow and from yellow to red. A sea of clouds

Mist and fog embrace the mountain and you feel as if you are in a fairyland, relaxed in your mind and with a happy mood. If the weather permits, you may be lucky and see a sea of clouds and the Buddha lights while enjoying the red leaves on the Golden Summit.

Temperatures are significantly different between the bottom and the top of the mountain so carry a jacket or sweater. Local people offer a warm clothes renting service on the top. There are five sightseeing bus stations:

Please notice that the road up to the mountain is quite bumpy. We suggest you take motion-sickness medicine before get on the bus if you suffer from car-sickness.

There are two cableways: Wannian Cableway and Golden Summit Cableway.

How to Get to Mount Emei Most tourists travel to Mount Emei from Chengdu and Leshan. Taking a bullet train is the best way to get there. There are 12 pairs of bullet trains running between Chengdu and Mount Emei every day. The journey takes about 1 to 1½ hours.

You can also get to Emeishan Railway Station from Shuangliu Airport Railway Station without leaving the airport. Check out How to Get from Chengdu to Mount Emei (Emeishan).

When you arrive at Emeishan Railway Station, you can take bus 5A or 12 to Baoguo Temple, which is the main gate to Mount Emei Scenic Area. The journey takes about 40 minutes. Alternatively, you can take a taxi, which only takes about 10 minutes to reach the scenic spot.

It takes about 1 hour from the Passenger Transport Center to get to the Wannian Temple and another hour to reach the Godden Summit. There are very few restaurants on the Emei Mountain.

The food may not be to everybody’s taste because of the difficulty to getting supplies on the Mountain. For lunch, you can bring snacks such as chocolate or bread. The overwhelming majority of visitors to the mountain are local tourists so all services are slanted towards that market. We trust that you understand. Mount Emei has various hostels for visitors to select. There are hotels at the foot of the mountain, on the mountainside, and at the top. If you want to enjoy the sunrise and breathtaking views, Emeishan Golden Summit Hotel is a good choice.

The luxury Hongzhushan Hotel at the base of the mountain near Baoguo Temple is also a good choice for its famous hot spring and high-quality services. If you have no idea about how to choose a hotel, you can tell us your requirements. We can help you book a suitable hotel according to your needs.

Enjoy Mount Emei with Us It is not easy to tour Mount Emei on your own as it has so many attractions in the 150-square-kilometer scenic area. A local guide will really help. Your local guide will suggest the best way for touring according to your physical condition and interests. He/she will find the best viewing point for you.

Contact us to customize your tour by telling us your needs and interests. You can also combine your visit to Mount Emei with our most popular Chengdu tour below:

leshan Leshan Travel Guide - How to Plan a Trip to Leshan