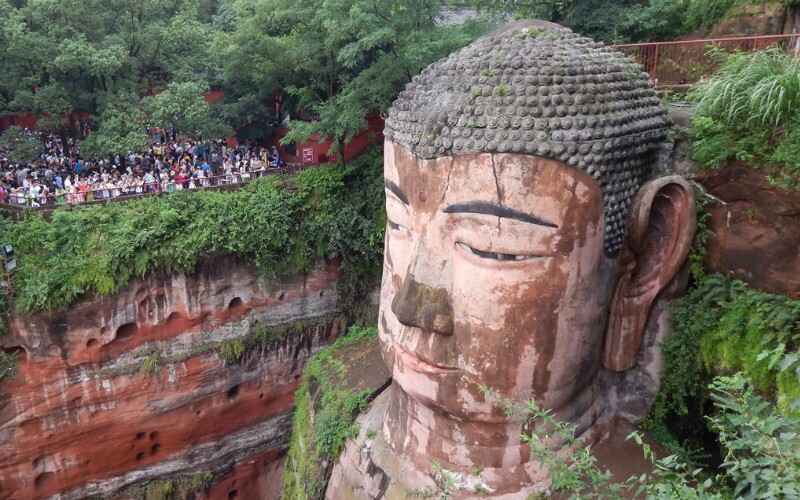 There is a local saying: "The mountain is a Buddha and the Buddha is a mountain". It was included by UNESCO on the list of World Heritage sites.

The Size of the Giant Buddha

The statue depicts a seated Maitreya Buddha with his hands resting on his knees and a smile on his face.

His smallest toenail can accommodate a seated person. Each ear is 7 meters long and his nose is 5.6 meters long. Each eyebrow is 5.5 meters long.

The instep, which is 8.5 meters wide, can accommodate 100 people. The toe is large enough to accommodate a dining table.

Ways to Visit the Giant Buddha

There are two ways to visit the Leshan Giant Buddha: on foot and by boat.

You can get a close-up view if you choose to visit by foot.

If you want to get a close-up view of the Buddha, you can choose the walking route. You will walk along the plank pathways to enjoy the changing view from various angles of the Buddha, from its head to its foot.

The plank pathways are steep and narrow. If it is not convenient for you to walk, we don’t recommend choosing this option.

Alternatively, you can visit the Leshan Giant Buddha on a sightseeing boat. This will let you view the Buddha from a distance and get a panoramic view of it.

Taking a boat trip is a better choice for tourists who are not good at climbing. It is also highly recommended in the peak tourist season (July–October) to avoid the crowds.

You can also combine these two options so you can not only get a close-up view but also see its spectacular panorama.

Apart from the Leshan Giant Buddha, there are many attractions in the scenic area:

You can take a sightseeing boat to see the Giant Sleeping Buddha.

Behind the Leshan Giant Buddha, a sleeping Buddha with a body length of more than 4,000 meters “floats” peacefully on the water.

The head, body, and foot of the Buddha are composed of Wuyou Mountain, Lingyun Mountain, and Guicheng Mountain. The best way to observe the sleeping Buddha is taking a trip on a sightseeing boat.

It is a steep plank road with nine turns on the right side of the Leshan Giant Buddha. You can walk along the road from the Buddha’s head to its foot.

The widest part of the road is 1.45 meters and the narrowest part is only 0.6 meter, and there are 217 stone steps in total.

It is a Buddhist theme park integrating sculptures, religion, and garden art. The park contains more than 3,000 Buddhist statues, including a 170-meter-long reclining Buddha, which is the largest in the world.

Located next to the Leshan Giant Buddha, Lingyun Temple has a history of over 1,400 years.

It is a quadrangle courtyard composed of the Tianwang Hall, the Daxiong Hall, and Depository of Buddhist Sutras. You can get to the Buddha’s head by crossing through Lingyun Temple.

How to Travel to the Leshan Giant Buddha

Taking a train to Leshan from Chengdu is the best way to travel. Over 20 bullet trains run between Chengdu and Leshan every day, taking about 50 minutes to 1 hour.

Seven bullet trains run between Mount Emei and Leshan, taking about 15 minutes. Check How to Get to Leshan from Chengdu.

After you arrive at Leshan Railway Station, you can take a taxi to the Leshan Giant Buddha, which takes 30 minutes. If you are traveling on a budget, you can take bus 3, 601, 605, or K1. This will take 40 minutes to 1 hour.

Interesting Photo Poses with the Buddha

Take a photo with the Leshan Giant Buddha

Many people will take a photo with the Leshan Giant Buddha when climbing to the mountaintop. You can leverage the spatial mismatch to take a photo in a pose that shows you “touching” the Buddha.

In ancient times, Leshan was at the confluence of the Min River, the Qingyi River, and the Dadu River. The tempestuous waters caused numerous boat accidents and caused people to suffer who earned their living around the area.

A monk called Hai Tong thought that the spirit of the Buddha could suppress the tempestuous waters so he initiated its construction. The project was half done when Hai Tong passed away and two of his disciples continued the work. After a total of 90 years' hard work, the project was finally completed.

The Leshan Giant Buddha has a special drainage system so that it can be well-preserved. Several drainage passages are hidden in the Buddha's hair, collar, chest, and holes in the back of his ears and chest, preventing the statue from serious erosion and weathering.

The Buddha has been lovingly maintained on a regular basis throughout his 1,200-year history. Moss, however, does grow on the statue.

Explore the Leshan Giant Buddha with Us

Want to know more secrets about the Leshan Giant Buddha? Legend has it that the giant Buddha has hidden treasures inside. Check out our tour as below: