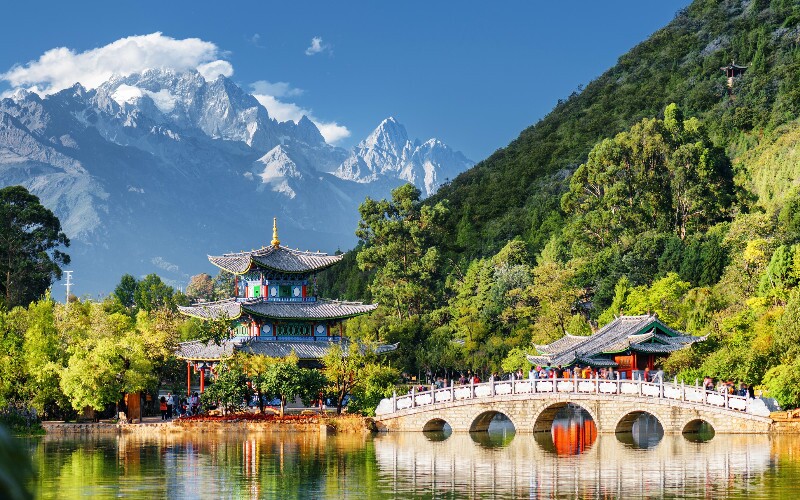 Jade Spring Park, also named Heilongtan Park (literally means Black Dragon Pool Park), first built in 1737, and is located in the north of Lijiang Ancient Town, exactly at the foot of Elephant Hill. The pool in the park covers an area about 40,000 square meters (or 430,556 sq. ft), and is clean as jade, reflecting the Jade Dragon Snow Mountain. In summer and autumn, the crystal pool is ornamented with pretty milky flowers (blossom of Ottelia acuminate) on the water. The pool was surrounded by old luxuriant chestnut trees and ancient monuments like Longshen Temple, the Deyue Pavilion, the Suocui Bridge and the Hanyue Stage.

The front gate is of the park is a grand decorated archway with a board inscribed ‘玉泉公园’ (Jade Spring Park) hanging on the front. Deyue Pavilion is the center of the architecture complex in the park, seating in the center of the enormous Heilongtan pool and connecting with the bank by a bridge. The pavilion with triple eaves was built in 1876, and it is also used as a research institution for Dongba culture (a unique culture created by a minority: Naxi Minority). Located in the north of the park, the Five-Phoenix Tower is also called Fayun Pavilion which was built in 1601 and moved to the Jade Spring Park from Fuguo Temple. It is a great piece of Naxi architecture combining the architectural style of Tibet, Bai minority and Han nationality. The pavilion is decorated with colorful paintings and exquisite carvings. The pavilion is 23 meters tall with three layers. Looked from point of view, the pavilion shows 5 cornice, hence its romantic name: the Five-Phoenix Tower.

Dongba Culture Museum is lying in the south of the park, collecting thousands pieces of culture objects and materials. Taking advantage of the natural landscape, the museum was built according to the development of Naxi architectures. Visitors even can enjoy the performance of the Dongba sacrificial ritual.

Longshen Temple was built in 1737 with 5 courtyards planting various kinds of flowers and plants. In ancient times, the Longshen Temple was called Longwan Temple (Dragon God Temple, Chinese people regarded Dragon God was in charge of the rain), and it is a place for holding sacrifice rituals to gods and praying for rain. Visitors there can enjoy the ancient music of Naxi Minority for free.

How to Get There: the park is only 1 kilometer from Lijiang Ancient Town, visitors can get there on foot or taking bus lines 3, 6, 7, 8, and 9.

Jade Dragon Snow Mountain: a small group of peaks close to Lijiang City; it is the most southern snow mountain in the Northern Hemisphere, and famous for its magnificence and beauty.

Lijiang Ancient Town: famous for old Naxi architecture and special water system, and it has been included into the UNESCO World Heritage List.