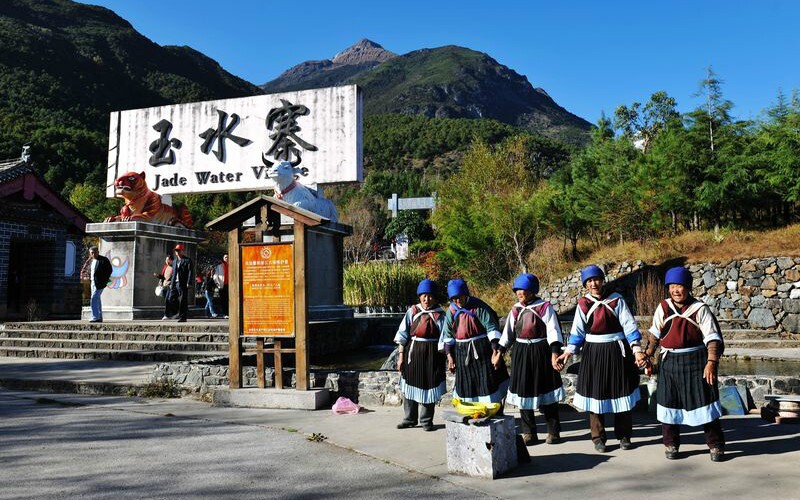 Dongba Museum is Sort of like an active museum in the Yushui Village Scenic Area with people who are transmitting the Dongba culture and hieroglyphic writing system to students and visitors. You can Learn more indepthly about the ancient but almost extinct Naxi culture, writing system and belief system that is called Dongba from the old teachers or the other people there.

The Yushui Village Scenic Area around the Dongba Village was rated as a State-4A scenic area in 2006. There is a museum, gardens, ponds, a stream and a spring called the Divine Spring that Joseph Rock thought was very good. The scenic area and Joseph Rock’s old house in Yuhu Village are within a few kilometers distance. Dongba Village is within the Yushui Village Scenic Area that is a Naxi theme park with a museum, gardens, ponds, and a stream. There are a few old Naxi teachers teaching about the ancient Naxi hieroglyphic writing system, the Naxi religious system called Dongba, and Naxi culture and history. The Naxi people in the region lived in a number of towns and participated in the regional and international trade of the Chama Road that is also called the Southern Silk Road. In exchange for tea (cha in Chinese pinyin), silk and other products from the Yunnan region and the rest of China, the Chinese imported horses (ma in Chinese) and other things from Tibet. So the trade route was called the Chama Road. In this area, the Naxi people who had their own distinct language developed a complex writing system of their own using hieroglyphics instead of Chinese characters. They used this writing system to transmit their religious beliefs, history, and legends. During this visit to this combination of school, museum and little theme park, visitors can gain an appreciation of this ancient culture that is almost extinct.

The Dongba Village site isn't well known, but it might be one of the best places to go in the Lijiang area to learn about Naxi culture and writing. This is because there are old teachers there who teach the old language to a few students. There is also a museum. However, despite its name, it isn't an old Naxi Village. It is a new theme park. People interested in learning about the Naxi culture may also want to visit Joseph Rock's old residence in nearby Yuhu Village. Joseph Rock (1884 – 1962) was an Austrian-American botanist, linguist and explorer who lived in the area for a long time early in the last century and who put together a Dongba language dictionary.

Another good point of a trip to Dongba Village is the special Yushui Village Scenic Area that is rated 4A in China. The theme park area stretches about half a kilometer by 300 meters. There are gardens, some natural parkland, ponds, and a spring. The spring is reputed to have very pure water, and it is said that Joseph Rock liked to drink the water from the spring. Naxi culture is special because the people are less modernized and the people developed a writing system, a music style, and a religion different than the majority of Chinese. The Naxi people created a unique and distinctive ethnic culture. Perhaps some of the distinctiveness arose from the wide-ranging contact that the Naxi had with other Asian cultures. The Naxi developed two writing systems. They had a phonetic system called Geba. They also developed a hieroglyphic (pictorial) writing system that is said to be the world's sole surviving hieroglyphic writing system. Hieroglyphs were used in China and Egypt millennia ago. The ancient Maya had such as system, and more recently the people of Easter Island used such a system of writing. However, these other civilizations died out. The Naxi Dongba writing system almost died out too. After 1949, the Communist government attempted to eradicate both their religion and their writing systems. However, about 30 old Naxi still can read the remaining old manuscripts. There is now an attempt to preserve and teach the system of writing that is said to be beautiful and poetic, and younger people are learning the language at the Dongba Village site. The Naxi people are a Tibetan-Burmese people. People say that perhaps the Naxi settlers around Lijiang were driven south to the area by the Mongol tribesmen who conquered China. The Mongols founded the Yuan Dynasty in the year 1271. The Naxi towns were astride the Chama trade route, so they had contact with people who passed through including the Tibetans, the Hans, and the Bais who lived in the Dali area. Baisha Town about 6 kilometers to the south of the theme park was one of the major old towns.

There are now about 200,000 Naxi people living in Lijiang County. They live in other places too. About 300,000 people still speak the Naxi language in China. In the 1960s and 1970s, the government tried to eradicate their religion, traditions and writing system. Thousands of documents were destroyed. By the late 1990s, only some old people could read and write their language.

In 1997, UNESCO put three districts in Lijiang on their World Heritage List. Baisha Town just to the south of the Dongba Village area is one of the special districts. UNESCO explained that the three ancient towns of the Naxi are important to preserve because they are in a dramatic landscape where the cultures of the different peoples blended to “produce an urban landscape of outstanding quality” over many centuries. The towns were a key commercial and strategic site.

After 1997, the city of Lijiang became a major tourist attraction in China drawing millions of visitors annually. People came to see the Naxi people and the old districts. For foreign tourists and foreigners living in China, the county of Lijiang became popular as a hiking area with spectacular natural scenery and accommodations available at a variety of hostels, hotels, and inns. Tiger Leaping Gorge became known as one of China's best hiking places.

The J.W.V. company built the Yushui Village theme park in 2001. In 2006, it was designated as a State-4A scenic attraction. Now there are about 10 students learning the language, and musicians play Naxi music there.

Yunnan Province has a lot of ancient historical places of interest and beautiful natural areas. Several areas including the Ancient City of Lijiang and Shaxi are on the UNESCO World Heritage List. Lijiang, Shaxi, and the Ancient City of Dali were old trading towns on the Chama Road. Shaxi and Dali have a much older history than Lijiang has, and they have extensive temple sites. Dali is famous for the three ancient pagodas, and Shaxi is known for its old Nanzhao religious grottoes. Tiger Leaping Gorge is one of the world's deepest canyons and is also on the World Heritage List. It is a part of the Three Parallel Rivers of Yunnan protected area.