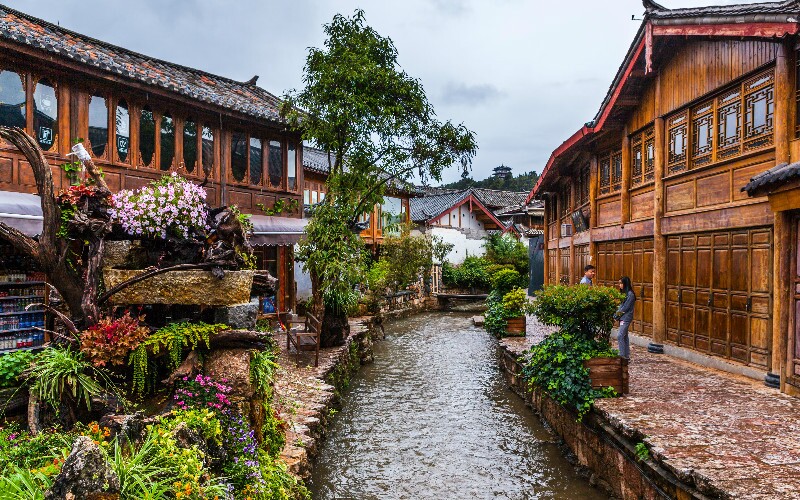 Old Town of Lijiang — A Walk Through the History

Lijiang Old Town, also known as Dayan Old Town, was a former trading town and a stop for traders carrying goods on the Ancient Tea and Horse Road. It was listed as a UNESCO World Heritage Site in 1997.

The architecture of Lijiang Old Town is noteworthy for the blending of elements from several cultures — Naxi, Bai, Yi, Tibetan, and Han. The town also possesses an ancient water supply system of great complexity and ingenuity.

Now, Lijiang Old Town has been commercialized and millions of tourists visit every year, but, though different, its character is now even more appealing — it's a travelers' magnet.

5 Highlights You Should Not Miss

In addition, there are many ancient and solemn buildings, beautiful parks, museums, and more to explore.

In its heyday, the Mufu covered an area of more than 6 hectares (16 acres or 12 football pitches) and had nearly 100 buildings. It was the heart of Lijiang Old Town for 800 years. Based on the architectural style of the China's Han majority, ruling in the Ming Dynasty, it integrates the local styles of Naxi and Bai.

The Black Dragon Pool was originally a Temple of the Dragon King. There were many springs next to it and they form a pool. Because the spring water is as beautiful as jade and reflects Jade Dragon Snow Mountain, it is also called Jade Spring Park. It is an ideal place to take pictures of Jade Dragon Snow Mountain, especially in the morning and at dusk with their wonderful light.

Lion Hill is named for its shape, which is like a sleeping lion. On the top of the hill, there is Wangu Tower where you can look out to Jade Dragon Snow Mountain, get a panoramic view of Lijiang Old Town, and also see the surrounding rural fields and villages.

Sifang Street is located in the center of Lijiang Old Town and is one of its busiest places. You will find all kinds of Lijiang specialty food there. It is also an important site for the locals to celebrate festivals, when a stage in set on the north side of the street for locals to sing and dance on.

Other popular streets include Wuyi Street and Qiyi Street, where there are most restaurants and bars.

The big waterwheels are a landmark of Lijiang Old Town. As you enter the old town, you will see them. The river flowing through the old town keeps them rotating. Bar Street is next to them, which is busy at night.

Naxi culture is special because the Naxi are less modernized and they developed a writing system, a music style, and a religion different to the majority of Chinese.

The Naxi writing system uses hieroglyphs instead of Chinese characters. The Naxi are the only people who still use hieroglyphs to write in the world. However, only a handful of Naxi, perhaps ten people, who are almost all elderly people now know how to read the glyphs.

The Naxi traditional music style has a long history. You can hear people playing their instruments in the Dayan Ancient City District. An orchestra of Naxi musicians performs there regularly. Since the little town was influenced by people from other lands who passed though, their music probably incorporated the styles and instruments of ethnic groups in a wide region.

How to Learn about Naxi Culture in Lijiang Old Town

If you come during a Naxi festival, you could enjoy some festival activities held in the old town.

The History of Lijiang Old Town

Lijiang didn't become an important town on the Ancient Tea Horse Road until the end of the Southern Song Dynasty and the beginning of the Yuan Dynasty (around 1279 AD).

During the early years of the Yuan Dynasty, about 1,000 families inhabited Lijiang Old Town. The town continued to grow, and it reached a peak during the Ming and Qing dynasties (1368–1912).

In 1996, there was a big earthquake of magnitude 7.0 on the Richter Scale in Lijiang. Afterwards, houses, bridges, and waterways had to be rebuilt, renovated, and restored.

After three Lijiang districts were named in the World Heritage List in 1997, the flood of tourists also brought many entrepreneurs from other areas of China. This drove up prices in the area, and many Naxi and other local people moved away.

The Best Times for a Visit

The best times to visit Lijiang are from late March to May and mid-October to November for comfortable temperatures and mostly clear skies.

In winter, which is also mostly clear, the low nightly temperatures are just a little above freezing, so bring enough warm clothes.

Bring rain gear for the summer rainy season between June and September. The cobblestones are slippery when wet, so please be careful when walking on them.

If you explore early (before 10am) you will get many sections of the town to yourself with barely anyone around.

How to Get to Lijiang Old Town

Lijiang Sanyi International Airport is about 29 kilometers (18 miles) from Lijiang Old Town or about 40 minutes' driving. You could take a taxi or an airport shuttle bus to Minhang Lantian Binguan (Blue Sky Hotel of Civil Aviation) and transfer by bus 11 or 13 to the old town.

Lijiang Railway Station is about 11 kilometers (7 miles) from Lijiang Old Town — 20 minutes' driving. A taxi or bus 4 or 104 can transport you directly.

From Lijiang Old Town to Other Main Attractions

Look at the following three sample Lijiang tours for inspiration. All our tours can be customized. If these are not close to what you are looking for, contact us. We will create a trip based on your group size, time, preferences, must-dos, interests, and other requirements.