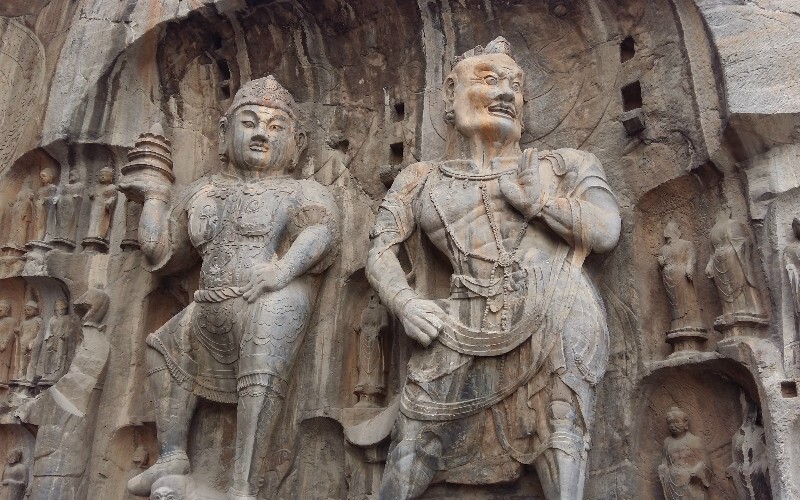 In Luoyang, the Longmen Grottoes, also called the Longmen Caves, are the biggest draw among Luoyang’s attractions. Read on for the highlights you shouldn’t miss. The carvings in Longmen Grottoes are splendid.

The magnificence of the carvings in the Longmen Grottoes ranks first among China’s grottoes. The Longmen Caves are of great value to the history of world sculpture.

UNESCO states that the site is “an outstanding manifestation of human artistic creativity”. In 2000, UNESCO included the Longmen Grottoes on its World Heritage List.

Different Types of Statues in the Longmen Caves

The statues in Guyang Cave show the typical style of the Northern Wei Dynasty. The statues in Fengxian Temple reveal the characteristics of the Tang Dynasty.

The Highlights You Should Not Miss on West Hill

The site of the Longmen Grottoes is situated in a scenic natural environment. Caves housing tens of thousands of statues of Buddha, rock reliefs, and tablets are on the limestone cliffs of Mount Xiangshan (to the east and known as East Hill) and Mount Longmen (to the west and known as West Hill). The Yi River flows between them.

Most of the grottoes and caves are on the western side, and we have introduced some that are situated on that side here, in order of their positions from south to north.

Guyang Cave was built in 494 under the orders of Emperor Xiaowen of the Northern Wei Dynasty. It was carved from a natural limestone cave.

There are more than 1,000 niches carved in various shapes and 800 inscriptions in fine calligraphy, written in the Northern Wei style. It houses the most statues and inscriptions found within the Longmen Grottoes.

The statues in Guyang Cave represent the typical Northern Wei style features of slim and emaciated figures. The statue of Shakyamuni Buddha sits in the center with a thin face and smiling eyes, which is an indication of the Northern Wei style.

Fengxian Temple is reputed for its grand scale and exquisite stone carvings. It is the largest grotto and houses a group of the most exquisite stone sculptures in the Longmen Grottoes. The carvings are regarded as the most perfect forms of architecture from the Tang Dynasty.

Fengxian Temple fully represents the characteristics from the Tang Dynasty in its Buddhist statues. This cave, which is 30 meters wide and high, was dug and carved in the Tang Dynasty. Vairocana Buddha is the biggest statue in Longmen Grottoes.

The biggest draw is the sculpture of Vairocana Buddha. ‘Vairocana’ means ‘illuminating all things’ in the sutras. It is the largest statue in the Longmen Grottoes. The figure is 17.14 meters (56.23 feet) high, with a head that is 4 meters (13.12 feet) high, and drooping ears of 1.9 meters (6.23 feet) long.

The Buddha has a round face with a peaceful smile. It looks like a wise and kindly middle-aged woman. Its appearance makes people feel respectful but not daunted. The characteristics of the Buddha fully embody the unique style of the Tang Dynasty, having been sculptured in a powerful, elegant, and realistic style.

Travelers need to climb 99 steps to see these Buddha figures, which represent auspiciousness in Chinese.

It was completed in 680, in the Tang Dynasty. ‘Wanfo’ literally means ‘Ten Thousand Buddhas’. It is famous for having 15,000 small statues of Buddha chiseled into both sides of the cave walls, which is how it got the name ‘Wanfo’. Each of the 15,000 small statues is only 4 centimeters (2 inches) high. It is one of the most magnificent grottoes in the Longmen Grottoes.

Binyang Cave (a Representative Cave of the Northern Wei Dynasty)

Binyang Cave refers to three caves including the middle cave, a north cave, and a south cave. Their construction started in the Northern Wei Dynasty (386–535), but only the middle cave was completed during this period. The north cave and the south cave were finished in the early Tang Dynasty.

Of the three caves, the middle cave is the most prominent for visiting.

Under the lotus carved on the top, Shakyamuni Buddha (the founder of Buddhism) stands in the middle of this cave. He is slim and delicate according to the beauty standards of the Northern Wei Dynasty.

The front walls on both sides of the cave are embossed with Buddhist stories, providing a wealth of history and artistic value.

Qianxi Temple (a Representative Cave of the Tang Dynasty)

Qianxi Temple is famous for the flowing streams around the carvings. This cave, which is 9 meters wide and high (29.5 feet) and 7 meters (23 feet) deep, was constructed and carved at beginning of the Tang Dynasty.

Seven statues are in this temple. The major Buddha in this cave is Amitabha, which is about 7.38 meters (24.2 feet) high. His face is round and chubby with a smart expression. The most outstanding statue is of Mahasthamaprapta Buddha. It is the most beautiful Buddha figure to have been built during the Tang Dynasty. You can have a full view of Longmen Grottoes from East Hill.

Enjoy a Grand Panorama of West Hill from East Hill

The grottoes located on West Hill are scattered over 1,000 meters (3,280 feet) from south to north. You can get a full view of the magnificent scenery on West Hill from East Hill. For photographers, our guides can take you to the best position to capture the best view.

Other Spots on East Hill

Xiangshan Temple: It is located on East Hill’s midsection. It was originally built in the Northern Wei Dynasty and was rebuilt many times afterwards. Many travelers go there to pray for health and happiness every year.

Baijuyi's Tomb: It is the graveyard of the famous Chinese Tang Dynasty poet, Baijuyi, who lived in Luoyang in his elderly years and loved the scenery there. The tomb is located on the hilltop.

The Best Time for a Tour

There is little shelter at the Longmen Grottoes so it gets very hot in summer, especially in the afternoon. If you go there in summer, visiting in the morning is better. A hat, sunglasses, sunscreen, wet wipes, and plenty of water are necessary. We advise you to take a tour in late October or November. It will be cooler and less crowded.

Prepare for Lots of Walking and Steps!

The Longmen Caves area is very large. Although you can take a battery car from the entrance to the site, you also need to walk a lot. Wearing a pair of comfortable shoes is recommended.

Please be prepared to climb steps. All the steps are fenced safely and you can ascend them easily. You can stick to your own pace when climbing them. Your experienced guide will take good care of you.

There are translation machines at the site but they have poor reception. The number of English tour guides there is limited. We recommend you take a private tour with us, so your guide can share the amazing stories behind the grottoes with you, one-on-one.

How to Get to the Longmen Grottoes from Luoyang

You can take a taxi or bus to the Longmen Grottoes. Private transport, which we provide, may ease your tour experience.

How to Get to the Luoyang from Xi’an

3You can take a high-speed train from Xi'an North Railway Station to Luoyang Longmen Railway Station, journeying about 1 hour and 40 minutes. Find out how to buy train tickets in China.

Alternatively, you can travel with us, and we will arrange your transfer between Xi’an and Luoyang. Read details of our Day Trip from Xi'an to Luoyang and Shaolin Temple for reference.

How to Get to the Luoyang from Beijing

The easiest way is to travel with us. We will help you to solve any transportation problems and will tailor-make your tour between Beijing and Luoyang. Our Customers discover a wonderful tour in Luoyang with us.

Discover an Amazing Tour with Us