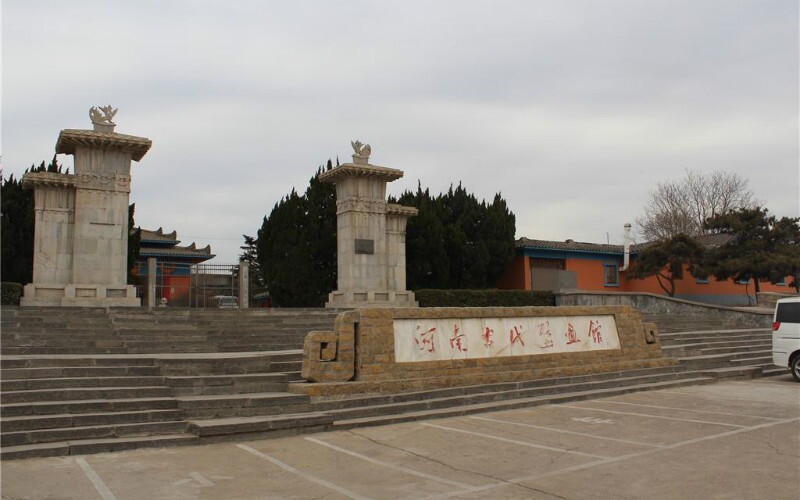 Luoyang Ancient Tombs Museum is a thematic museum, which mainly displays ancient tombs and murals. It is one of the largest museums of ancient tombs in China and the first one in the world.

Here we will tell you what you can do in Luoyang Ancient Tombs Museum. The architectures in luoyang Ancient Tombs Museum are ancient and elegant.

The museum is located at Mangshan (邙山 Măngshān /mung-shan/) in the north suburb of Luoyang, about 8 kilometers (5 miles) from the city center.

It is composed of a few complex buildings displaying Han (206 BC – 220 AD) and Northern Wei (386–534) Dynasty architectural styles. It has two parts: one is underground and the other is above ground.

3 Things to Do in the Ancient Tombs Museum

The layout of the underground part is in the shape of a hollow square. Four exhibition halls are located at the four corners and 25 ancient tombs are distributed along the four sides.

These tombs have various shapes and colors. The shapes include circles, squares, hexagons, octagons, and more. Some tombs are simple and elegant, some appear magnificent and grand, and others look luxurious and chic.

All these articles are of great historic significance and you can gain more historical knowledge from them.

The mausoleum of Emperor Xuanwu is the main part. It is 110 meters in diameter and 24 meters high. It is still tall and magnificent even though it has existed for over 1,500 years.

Two stone guardians stand at the entrance. A stone coffin is in the middle of the tomb. The tomb had been robbed many times before it was excavated so only about 10 articles were unearthed, which is a very limited number.

You can gain a systematic understanding of the basic appearance of imperial mausoleums and the burial customs in the Northern Wei Dynasty.

Luoyang is an ancient and cultural city. Over the years, archaeologists have excavated a large number of ancient tombs and discovered many murals carved vividly on them.

They are like a history book of China written with images and have become an important part of the heritage of ancient Chinese painting art.

The Location of a Tomb in Accordance with Feng Shui

One striking feature when choosing the location of a tomb according to feng shui is putting the emphasis on harmony between humans and the natural environment.

According to the feng shui theory on burial, when a dead person is buried underground, the spirit and the tomb location combine to form energy.

A location surrounded by mountains and facing a river is believed to be an auspicious place for burial in feng shui theory.

This mountain is about 300 meters above sea level with fertile and compacted soil. It is believed to be an ideal place for cemeteries.

An interesting old saying states that Suzhou and Hangzhou are good places to live while Mangshan is a good place to rest.

Many of the ancient emperors, princes, generals, scholars, and other ancient aristocrats took this advice and left orders that they were to be buried in Luoyang after their death.

Mangshan, in the north suburbs, is the site of China's largest ancient tomb group that consists mainly of imperial mausoleums, the oldest of which dates back to the Eastern Zhou Dynasty.

Travel Essentials for Planning a Tour Our customers discovery Luoyang with us.

It is about 3 kilometers (2 miles) from Luoyang Beijiao Airport. It takes 6 minutes to drive from the airport to the museum. Alternatively, you can take a bus there, with just three stops.

If you have a short stopover period in the airport, Luoyang Ancient Tombs Museum is a good choice.

Luoyang National Peony Garden: It is one of the oldest gardens to grow and reproduce peonies in China, and is one of the main venues for the Luoyang Peony Festival. It is about 10 minutes’ drive from Luoyang Ancient Tombs Museum.

Discover Luoyang Your Way with Us

If you are searching for travel tips and tour plans, contact us. Our experienced guides and travel consultants can give you suggestions.

All you need to do is tell us your requirementss. We will tailor-make a satisfying holiday tour for you.