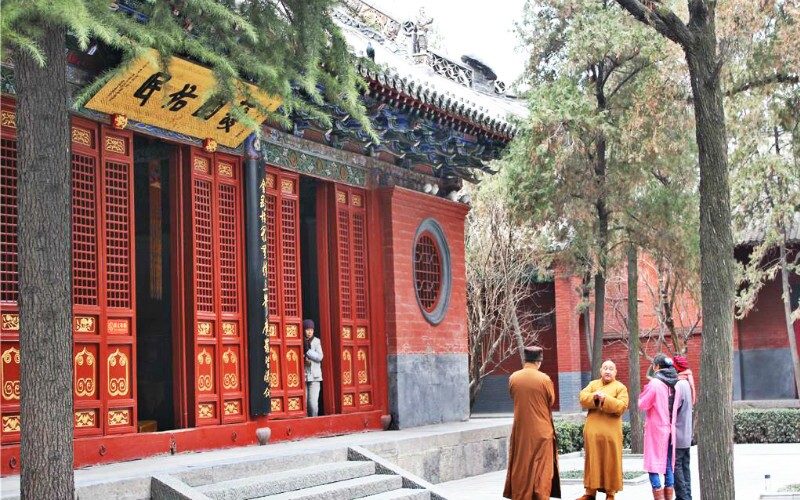 White Horse Temple has a history of 1,900 years and features antique architecture and precious Buddhist statues. It is definitely a nice place to go sightseeing in Luoyang. Here, we introduce White Horse Temple in detail so that you will know why it is so glorious. White Horse Temple can mainly be divided into three sections.

White Horse Temple faces south. It's a rectangular courtyard. The front gate, Hall of Heavenly Kings, Hall of the Great Buddha, Hall of Mahavira, Hall of Guidance, the Cool and Clear Terrace, and Pilu Pavilion sit on the south–north central axis. The halls are named in the inscriptions on the plaques.

A statue of the Maitreya, known in China as the Laughing Buddha, is worshipped in this hall. He is always smiling or laughing. His figure appears throughout Chinese culture as a representation of both contentment and abundance. Four ‘Heavenly Kings’ statues guard the Laughing Buddha on the eastern and western sides.

Above the Buddha statue is a large gilded wooden shrine from the Qing Dynasty (1644–1912), which has more than 50 dragons carved in it.

Hall of the Great Buddha

The Hall of the Great Buddha is the main hall in White Horse Temple. It was built in the Ming Dynasty and has retained its splendid architectural style from that era. You can see beautiful sculptures in the Hall of Mahavira.

It is the largest and the grandest hall in White Horse Temple. The ceiling is painted with bright lotus patterns. The upper shrine has exquisite carvings of a giant bird and dragons.

Three saints – Sakyamuni, Amitabha, and the Buddha of Medicine – are worshipped by people with the statues of the Eighteen Arhats.

It is the smallest hall in White Horse Temple.

The Hall of Guidance has deified statues of three Western Paradise saints. Amitabha is at the center and is flanked by the Goddess of Mercy on the left and the Bodhisattva of Moonlight on the right. According to Buddhism, when a Buddhist reaches a certain level with certain achievements, Amitabha Buddha guides them to the Western Paradise.

If you want to see more types of temples, you can visit the grounds of the foreign temple complex. It is located to the west of the main temple and has three temples from Thailand, Myanmar, and India. It is a peaceful place for those tourists who prefer a quiet environment. It is located to the southeast of the front gate. The further you go, the more peaceful you will be.

Qiyun means ‘approaching clouds’, which indicates the pagoda is quite high. It is the earliest existing ancient building in the Luoyang area.

April to June is the best time for visiting. White Horse Temple has many gardens around it. During this period, all the flowers bloom brightly. When you go there, you can smell the fresh fragrance of the flowers. It is also a good time to see the Luoyang Peony Festival.

September to November is also a good time. The weather in Luoyang is cool and mild. It is comfortable for traveling. White Horse Temple appears magnificent against the clear sky.

How to Get to White Horse Temple Our customers have a happy China tour with us.

A China Tour with Just What You’re Interested In

If you are interested in White Horse Temple, you can contact us to tailor-make a tour according to your requirements. We will help you arrange the tickets, transportation, accommodation, a top guide, and other features you want to include.