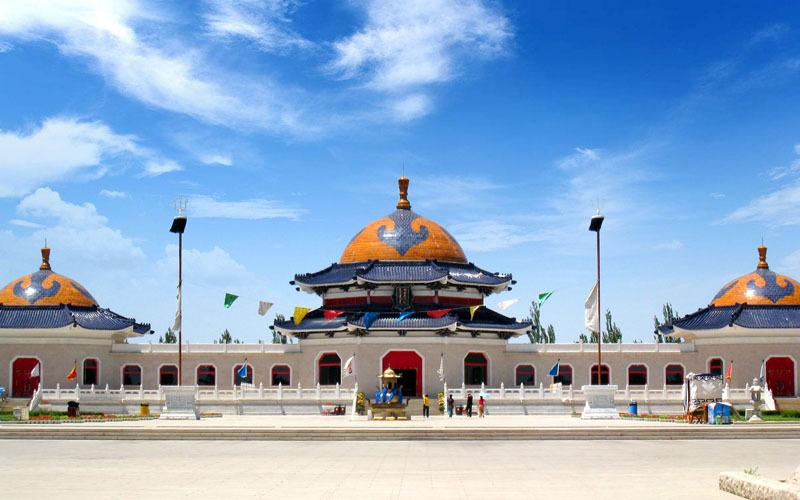 The Mausoleum of Genghis Khan

Situated about 15 kilometers (9 miles) southeast of Xilian Town, Yijinhuoluo County of Ordos Prefecture in Inner Mongolia, the Mausoleum of Genghis Khan serves as a sacred gathering place for Mongolian people to commemorate and offer sacrifices to their hero, Genghis Khan. Visitors are always amazed by its magnificence and glamour.

Scroll down to find facts and key travel info about the Mausoleum of Genghis Khan.

Key Facts about the Mausoleum of Genghis Khan for Travelers

Genghis Khan spent almost all his life fighting and conquering other places on the horseback. He united the nomadic tribes of the Mongolian Plateau, laid the foundations for the unification of China under Mongol rule, and then continued his conquest westward to establish the Mongol Empire, the largest empire in world history. The establishment of the empire enhanced trade, cultural exchanges, interracial mingling between the East and the West, and had a great significance in the history of China as well as the world.

The Contents of the Mausoleum of Genghis Khan

The Mausoleum is not the real burial place of Genghis Khan, but rather, a cenotaph and the place where he wanted to be commemorated. According to Khan's will, he was buried without any indication of his interment. His burial place remains a mystery to this day.

Just like the great achievements that Genghis Khan made, the mausoleum was constructed on a large scale, its architecture splendid and stunning with a strong Mongolian ethnic style. The whole scenic spot is composed of two parts: the Tomb Complex and Donglian Scenic Area.

The Tomb Complex consists of three “palaces” (big examples of Mongolian-style architecture) as the main structure and other cultural relics sites like the Sulede Sacrificial Altar, the Stele Pavilions, the marble statue of Genghis Khan on horseback, etc.

The palaces are the Main Palace (including the Back Palace), East Palace and West Palace. Connected by two corridors, they are “shaped like a flying eagle”. The three dome-shaped roofs are actually yurts — portable, felt-covered, wood lattice-framed dwelling structures used by nomads in the steppes of Central Asia and covered with yellow silk on the top.

The main palace — the middle one of the three — is 26 meters (85’) tall, with a 5-meter-tall (16’) marble statue of Genghis Khan, armor-clad and on horseback. Behind him, there is a map of the vast territory of the Mongol Empire, which shows his glorious conquests.

Coffins of Genghis Khan and his wives are laid in the Back Palace or Imperial Burial Palace.

The coffin of Genghis Khan is made of silver, with a golden lock and decorated by patterns of rose blooms. On both sides of the coffin are placed sabers, swords, arrows, bows and other weapons that had been used by Genghis Khan.

The East Palace holds the coffins of Genghis Khan's fourth son Tolui (Kublai Khan's father) and Tolui's wife. Tolui has a very eminent status because many of the ancient Mongolian kings who were his descendants.

In the West Palace are nine banners and suleding (iron spearheads) with Mongolian-style decorations, symbolizing the prosperity and the power of Genghis Khan's empire.

The nine banners represent the nine trusted generals that followed Genghis Khan in his conquests. The iron spearheads were placed on the flag that Genghis Khan used to herald his army in the wars. After he died, the legend said that his soul went into the spearheads. Therefore, the suleding are very sacred to the Mongolian people.

The two corridors connect the three palaces with large murals on the walls. Corridor frescos depict the significant events of Genghis Khan's life and the establishment of the Yuan Dynasty (1271–1368 AD) by his grandson Kublai Khan.

Donglian Scenic Area, or the New Scenic Area, was built by the Donglian Group (an Ordos business conglomerate) in recent years, hence the name.

The scenic area includes three districts, two pathways, and eight tourist centers. There, you can wear traditional Mongolian costumes, enjoy Mongolian flavored dishes, and watch Mongolian-style singing and dancing performances. In addition, there are many grassland activities, such as wrestling, horse riding, and archery.

The three districts are the ‘Sightseeing District for the Protection of Historic Relics’, the ‘Conservation District for Ecosystem Preservation’, and the ‘Development Restricted District of Visual Spectacles’.

The two pathways are the 4-kilometer (2.4-mile) Sacred Pathway of Genghis Khan from the entrance to the tomb palace, and the 16-kilometer (10-mile) sightseeing pathway surrounding Bayinchanghuo Prairie and connecting the various scenic spots and districts.

All the ceremonies are organized and held by the Da’erhute tribe, the ancestors of whom were the guard troops of Genghis Khan.

From the year when Genghis Khan died, 1227 AD, the Da’erhute tribe began to guard the tomb of their great king. Up to now, there have been thirty-nine generations of this tribe guarding the tomb.

The first ceremony, held in the third lunar month of the Chinese year in the Main Palace, is known as the Spring Ceremony and it is the most important and the grandest.

After the worship ceremony, various traditional Mongolian activities, similar to those of the Naadam Festival are held, such as horse racing, archery, and wrestling.

Touring the Mausoleum of Genghis Khan with China Highlights

Public transportation does not go to the Mausoleum of Genghis Khan. Rich in the history of Genghis Khan and the Mongols, it is worth getting to with an experienced English-speaking guide on a private guided tour.

You are welcome to tell us your travel needs, and one of our travel consultants would be happy to customize a tour for you.