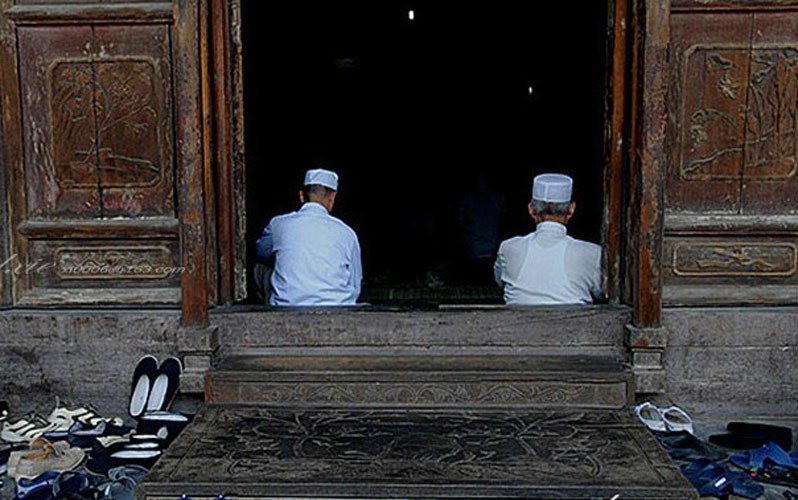 It is the oldest Islamic mosque in Shanghai district. It is not a regular tourist attraction, but it is an active mosque that people say feels peaceful and has gardens. You can see a mixture of Islamic and Chinese architecture.

Muslims began to build this mosque complex about 1364-1367 near the end of the Yuan Empire period (1271-1368). In the Ming Empire era (1368-1644), rulers ordered that the mosque be rebuilt in 1391. During the Qing Empire era (1644-1911), they renovated the complex several times. The main buildings are the main hall, a prayer area, a corridor, two teaching halls, and a bath house. The Bangke Gate Tower or the Minaret Tower rises above the complex and is a classical Arabic architecuture. The place of worship shows Ming Dynasty architectural style. There are four plaques that date from the reigns of four emperors:  Kang Xi, Jia Qing, Dao Guang, and Tong Zhi.

Songjiang mosque was said to have been first built during the Yuan (Mongolian) Dynasty period. In the complex, pathways and small, overgrown gardens greet you. You can see Arabic columns and Chinese landscape gardens and circular doorways. There are also grave markers with Chinese and Arabic scripts. People can wander around during designated times, but they can't enter the main prayer hall during worship times. Entering the main prayer hall may not be possible. Outside the building are Moslem shops and restaurants, so you can also have a Muslim meal. This area of Shanghai is interesting because it is more traditional, and there is also an equally old Buddhist temple about two blocks away. So a trip to the Songjiang Mosque may be a big change from what you may usually see in China.

Major Sites in the Mosque Complex

The Southern Forum was constructed during the Qing Dynasty era. It was used as a classroom by the Imams who taught Islam to the people. It is now sort of an exhibition room that instructs on the mosque, its history, and Shanghai's Muslims.

An ancient cypress tree of note is said to be 400 years old. It is still healthy and growing.

Continue to read mosques in China

Just two blocks away at the intersecton of Zhongshanzhong Road and Xilin Road (中山中路, 西林北路) is a Buddhist temple complex with Xilin Pagoda. The Xilin Temple is an active Buddhist temple. There is a 7-story pagoda that is made of brick and wood. It is said be 700 years old, or perhaps it was first built 700 years ago. Some tourists like to see both the mosque and the Buddhist temple to see the contrast since both are active and not too touristy.

Only Muslims may enter the main prayer rooms of most mosques. So check with the local authorities to see whether you can enter.