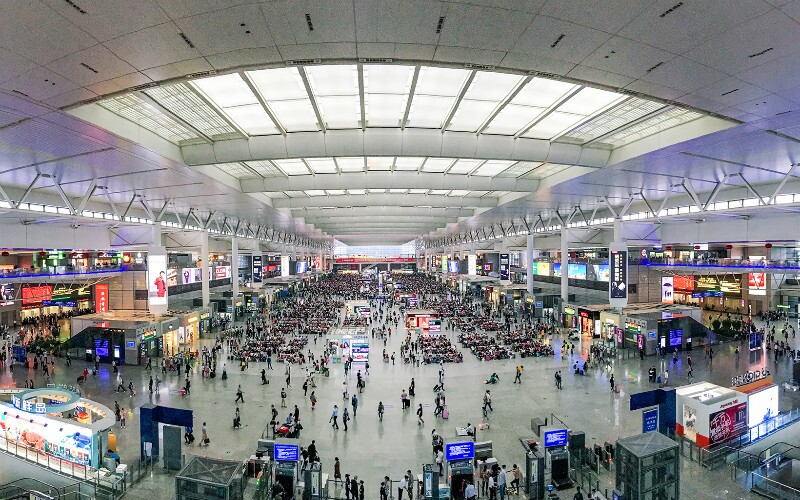 Shanghai is the hub of China's railway network. They are daily trains from China's main tourist city, Beijing, Xi'an, Guilin, Kunming and much more to Shanghai. It is very easy for visitor to take a train from other places to Shanghai or vice verse. They are even train running between Shanghai and Kowloon in Hongkong, which has proved very useful to foreign visitors. The express lines between Shanghai and Suzhou, Wuxi, Nanjing and Hangzhou are very popular among travelers.

The main railway station is Shanghai Railway Station, near Suzhou Creek. The ticket office is a large building located just east of the main square on the southern side of the station, with at least some windows open at all hours. Foreign visitors can buy tickets in the soft seat waiting room. Many hotels may also reserve train tickets for travelers for a small service charge.

Some trains depart from the Shanghai West Railway Station. Make sure which train station your train will depart from before moving there.

In addition, special “Holiday Trains” are available from Shanghai to several tourist destinations, such as Mt. Wuyishan in Fujian Province, Jinhu County in Jiangsu Province, Lishui City and Mt. Yandangshan in Zhejiang Province, and Mt. Sanqingshan and Mt. Longhushan in Jiangxi Province. These trains depart from Shanghai every Friday night, arrive at their destinations on Saturday morning and return the following Monday morning. Passengers can obtain detailed information by dialing 021-6325 0169, 5622 1489 and 5622 2450.

Shanghai South Railway Station is located in southwest Xuhui District, about five kilometers from Xujiahui (a famous business district in Shanghai). Shanghai South Railway Station’s main building can be divided into three layers: the upper layer, the middle layer and the lower layer. Passengers depart from the upper layer, which is equipped with waiting rooms and a ticket channel. The middle layer is at ground level and serves as the railway platform. The lower layer is the arrival layer, where passengers can transfer to Subway lines 1 and 3.

Shanghai Hongqiao Railway Station is located in west Shanghai, with Terminal Building 2 of the Shanghai Hongqiao International Airport to its east. This railway station was built to operate the bullet trains (with a “D” or “G” before the train numbers) running between Shanghai and Hangzhou, Nanjing, Suzhou, Wuxi, Fuzhou, Nanchang, Xiamen, Beijing, Wenzhou, Chongqing, Chengdu, Hefei, Wuhan, Jinhua, Ningbo and several other cities in China. Taxi parking lots are located on B1 (at both the north and south sides of Hongqiao Station). Passengers are advised to walk to the taxi pick-up area via Exit 2 (North) or Exit 2 (South).
Tel: 021-5124 5555
Bus Routes: Hongqiao Shuniu 1, Hongqiao Shuniu 5, Hongqiao Shuniu 6, Hongqiao Shuniu 7, Hongqiao Shuniu 8, Hongqiao Shuniu 10, 320 (Night Line) and 806 B
Subway Lines: 2 and 10

To Terminal Building 2 in Hongqiao International Airport
Shanghai Hongqiao Railway Station is not as near to T2, so after exiting the station, passengers can go along underground pass (on B1) by following the signposts. This takes about 15 minutes.