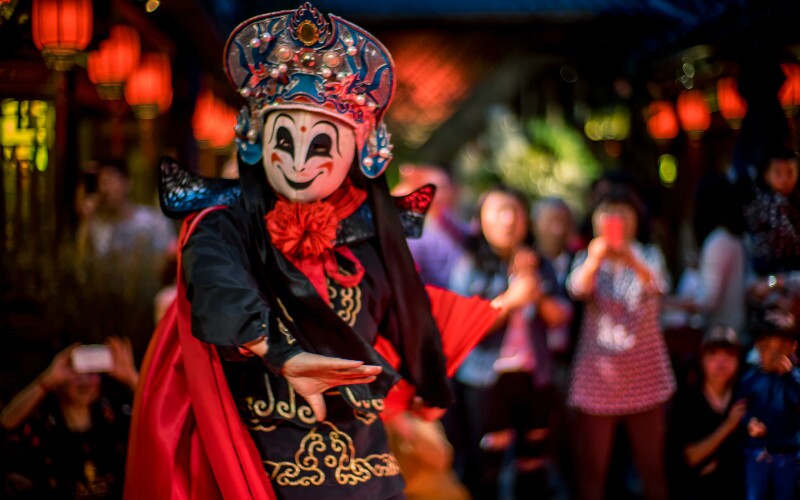 Top Things to Do in Sichuan Province

Sichuan, in Southwest China, is blessed with plenty of cultural relic and beautiful natural scenery. There is a a lot of sights to see and things to do in Sichuan including old temples, ancient towns, pandas, national parks, sacred buddhist mountains, and ethnic culture. See below our list of top things to do in Sichuan:

Get Close to the Giant Pandas

Take a photo with the Giant Panda

Chengdu is the hometown of the giant panda. These cute and docile animals are a "living fossil" (they would have been extinct if it weren't for China's preservation efforts) and the "National Treasure" of China. You will have a chance to get close to the giant pandas at Chengdu Giant Panda Breeding and Research Center (10 km from Chengdu, about 30 minutes' drive) or at Bifengxia Giant Panda Base in Ya'an (150 km from Chengdu, about 2 hours' drive). Bifengxia is bigger, and its environment is more beautiful. Usually visitors spend half a day at the Chengdu base, but a whole day at the Bifengxia base.  At the panda bases, you can watch the pandas sleeping or eating bamboos shoots, which is what they do almost all of the time.

You can also take part in a volunteer program to clean and weigh fresh bamboo, feed the pandas, clean the panda enclosures, collect and weigh the pandas' feces, etc. if you want to spent time in close proximity to the pandas. (This activity needs to be arranged with a travel agency like us.)

You can also hold a panda and take photos with it for one minute (standard donation CNY 2, 000 for reference only). Only 40 tourists are allowed to hold a panda per day. This program is subject to the availability of pandas on that day. Please bring enough RMB in cash, as payment by credit card is not accepted there.

If you want to hold a panda, please tell your guide one day in advance. It needs to be pre-booked.

The Leshan Giant Buddha is the biggest stone carved seated Buddha in the world. It is 71 meters (233 feet) high, located east of Leshan City, Sichuan Province, at the confluence of three rivers: the Min, the Qingyi, and the Dadu. It is the largest carved single stone Maitreya Buddha, and the tallest pre-modern statue in the world.

The Leshan Giant Buddha is said to have been built for calming the turbulent waters that plagued the passing boats. Begun in the year 713 in the Tang Dynasty, and finished in the year 803, the statue took artists 90 years to carve. During these years, thousands of artists and workers gave their efforts and wisdom to the project.  As the biggest carved stone Buddha in the world, the Giant Buddha is featured in many poems, songs, and stories. You can visit it on a boat or climb to the steps under, it to have a close up look.

There can be big crowds on the steps under the Buddha, so come earlier to have solitude with the statue.

1,990m (6,529 feet) to 4,764m (15,630 feet) above sea level, located on the edge of the Tibetan Plateau in Northwest Sichuan, Jiuzhai Valley, known as "the Land of Fairytales", is the most popular purely scenic destination in Sichuan. It is located in Aba Tibetan Autonomous Prefecture, with 3 valleys, about 108 lakes, 3 waterfall groups, and a number of endangered plants and animal species.

Its name is due to the existence of nine enclosed villages of Tibetan origin. The perennially snow-capped mountain peaks, verdant and lush forest, stretches of serene lakes, and various birds and animals, all contribute to the unique dreamlike landscape of Jiuzhai Valley.  It is said that if there are wonderlands on earth, Jiuzhaigou must be one of them. It was declared a UNESCO World Heritage Site in 1992, and attracts millions of travelers every year.

Best time to visit: September and October, when the leaves all turn colorful. From December to February it is extremely cold in the area and the waters and lakes  freeze, so this time is best avoided.

Dujiangyan Irrigation Project is one of the great man-made irrigation projects of ancient China.  It is located in Guankou Town, Dujiangyan Prefecture, upriver of Chengdu, Sichuan. Over 2,000 years ago, "Nature's Storehouse" Chengdu was threatened by frequent floods caused by the Min River (a tributary of the Yangtze River).

Li Bing, a local official of that time, together with his son, decided to take some measures to prevent the flooding. After a deep study and investigation, together with a lot of hard work by the local people, the great Dujiangyan Irrigation Project was finally completed. Since then, the Chengdu people have been living peacefully and without the nuisance of floods. The project has also contributed to financial well being of area.

Nowadays the Dujiangyan Irrigation Project still plays an important role in draining off floodwater, irrigating farmlands, and providing water resources for more than 50 enterprises and settlements in Sichuan Province.

Apart from the irrigation project, there are a lot of other attractions to see, such as Er'wang Temple, Lidui Park, Fulong Temple, Anlan Swing Bridge, Yunv Mountain, Puzhao Temple, and Cuiyue Lake. It is also a place for tasting delicious local snacks.

550-meter-long Jinli Ancient Street is said to be the "oldest commercial street" in Chengdu. It was well-documented in the Qin Dynasty (221–207 BC) and the Three Kingdoms Period (220–280).

It is now a part of Wuhou Temple Museum. It is a good place to experience West Shu (one of the Three Kingdoms) culture and local customs. There are regular traditional weddings, folk music shows, Sichuan operas, and fashion shows held on this street. When a Chinese traditional festival comes, such as the Lantern Festival, Dragon Boat Festival, Chinese Valentine's day, etc., themed activities will be held there, which give different atmospheres to this old street.

Wuhou Shrine is the largest museum and relic of the Three Kingdoms Era cultures. Jinli Ancient Street is a part of it. It was built in 223 when Shu Emperor Liubei's mausoleum was constructed. It is the only shrine that still has the statues of its emperor and his officials.

Wuhou also called Zhuge Liang, the Martial Marquis of Shu in the Three Kingdoms Period, used his great wisdom to help Liubei to build the Shu Kingdom. He was the personification of a noble character and intelligence.

Visitors usually spend 2–3 hours there, together with Jinli Ancient Street.

Sichuan Opera is a local opera, popular in southwestern China: Sichuan, Chongqing, Yunnan and Guizhou Provinces. It is an important part of Chengdu culture. It began in the Qing Dynasty as a combination of five singing styles. Retaining the local dialect, the opera often presents a charming witty atmosphere.

Face changing (Bianlian) is the most famous part, because of its mysterious techniques and skills. In Chinese opera, facial makeup is usually painted, which takes several minutes to complete. But in Sichuan Opera, the performer can change his or her facial makeup in a second right on stage.

The most famous place to see the Face Changing is in Shufeng Yayun Garden in Culture Park, or in Sichuan Opera Theater (20 Zhuangyuan Street).

Sichuan Hotpot is very popular not only in Sichuan but also throughout China. It was created in the Qing Dynasty at Xiaomi Shoal, Luzhou, southeast Sichuan Province. Because of its delicious flavor, it spread quickly to Chongqing and other areas in Sichuan, and before long it became a nationwide popular cuisine.

The flavor is mainly pungent and spicy, and eaten together with lots of dishes (all kinds of meats and vegetables) and condiment (garlic, ginger, wine, beef tallow, etc). Over hundreds of years, it has developed into a great many varieties, such as seafood hotpot, beer duck hotpot, grape chicken hotpot, salmon hotpot, etc.

Any food you like can be put into the hotpot. It is said the flavors of Sichuan are the best ones, so you shouldn't miss it.

If you are not used to spicy food you can try the half spicy and half non-spicy hotpot.

Drink some boiled water or tea after the hotpot to dilute the effect of the spicy food.

Explore Sichuan with us!