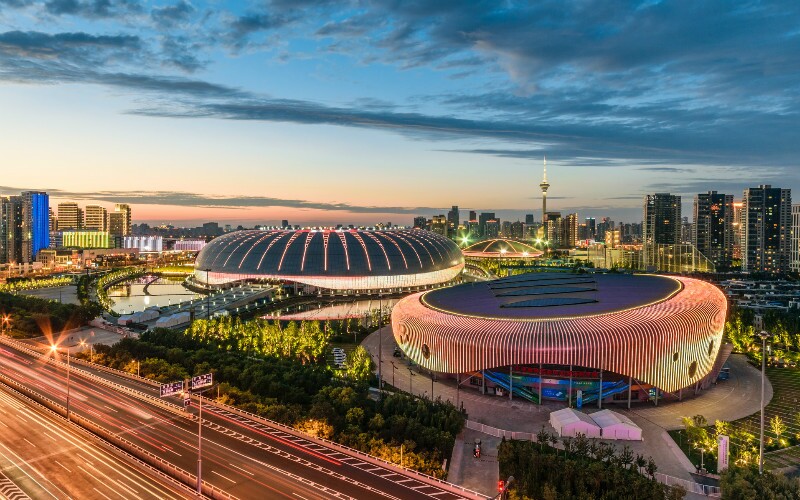 Tianjin Travel Guide - How to Plan a Trip to Tianjin

Often abbreviated by the Chinese to just 'Jin', Tianjin - along with Beijing, Shanghai, and Chongqing) - is one of China's four municipalities. 120 km from Beijing, (25 minutes by bullet train), Tianjin's reputation is dwarfed by its sister, the capital, and so is seen by few tourists as a worthwhile destination. Should Tianjin be so readily dismissed? Here we discuss the unique attractions Tianjin has on offer. You may be surprised and decide to include Tianjin on your own travel itinerary once you know what it has to offer.

Situated on the sea so close to the capital, Tianjin has long been a transport hub for international commerce, and so a great deal of history has accrued to the municipality. It has played its role as a hub for Chinese transport as well, its spokes radiating out to a dozen northern provinces. This is an area which has seen considerable activity through the centuries as a consequence with the varied comings and goings of foreigners and Chinese from many different regions and of many different ethnicities.

Today, Tianjin boasts the largest artificial harbor in northern China with 30 different sea routes leading to over 300 of the world's ports, a magnet for international trade now more than ever. Nor is its activity confined to commerce, as an increasing number of Chinese seek adventure overseas, and cruise liners proliferate.

The history of Tianjin has seen a great deal of foreign political influence as well as commerce. From 1860 to 1903, the United Kingdom, the USA, France, Germany, Japan, Russia, Italy, Belgium and other western nations compelled the Qing regime to cede eastern Tianjin to them, dividing it up between themselves. This led to a proliferation of national architectures of the period, a jumble of fascinating buildings from various localities brought together uniquely into one small area.

What remains of them may be seen on five remaining streets in downtown Tianjin, now a national treasure. What has survived is far from insignificant. In total, the buildings occupy a total of 1.3 million square metres, including over 100 imposing residencies with their traditional architectures, and a further 300 of more modest proportions. On the two banks of the Hai River, Ming and Qing architectural styles are preserved along with these giving the area a unique flavor unparalleled elsewhere in China, or the world.

The Astor Hotel has a long history, changing down through the century and a half since its founding to reflect the change in its use and the society around it. Founded in 1863 by the pastor John Innocent, it originated as a building in classic British style in brick and wood. It was then no more than a cottage, but was extended, piece by piece, until there were two buildings on the site, large enough now to serve as a hotel.

Contained within the hotel is a museum preserving some of the older architecture, with a wooden promenade and arched windows with carved designs. The exhibits in the museum display an interesting range of erstwhile Chinese technology; old telephones and gramophone players and, perhaps most interestingly, the first ever Chinese elevator.

These are now to be found to the southern side of modern downtown Tianjin, running east-to-west. There are in excess of 230 buildings of interest preserved from the days of colonial Tianjin. Many are modest, but 50 or so were made for rich and famous Europeans in markedly opulent style. In keeping with the fashion in Europe at the time, the bewildering array of architecture is made still more startling by the incorporation of styles revived from the Renaissance, ancient Greece, Gothic, and the Romantic period. To complete the mix, the array of European and ancient styles are complemented by the architecture of Qing-dynasty China itself. There is nowhere else that such a collision and mixing of civilizations has led to such an explosion of architectural styles so beautifully preserved, and the Five Ancient Avenues are a sight not to be missed.

Originating at the King Bridge in Beijing, running for more than 70 km before emptying out into the sea at Da Gukou, the Hai is the arterial river running through Tianjin. It is also one of the better places from which to view the fascinating architecture of the old town arrayed along its banks.

Other Places of Interest in Tianjin

The fascinating juxtaposition of foreign and Chinese architectural styles is not the only interest Tianjin has to offer. This is, above all, a vibrant, modern metropolis, carrying on the traditions of commerce and the meeting of civilizations on into a thriving present day.

The Tianjin Eye, (or, to give it its full title, the Yongle Bridge Tientsin Eye), is a huge ferris wheel spanning the Hai River. It serves both as a bridge, and as a spectacular fun ride from which to see Tianjin from an elevated height. How high? Well, raised above the bridge, and with a diameter of 110 metres, it's the equivalent of a building 35 storeys in height and dwarfs its surroundings.

With 64 transparent, 360-degree viewing gondalas hanging from it, each able to seat eight people, it's a fascinating ride in the 30 minutes it takes to rotate with views of up to 40 km. Even if you don't take a ride on it, the eye itself is an incredible sight, particularly at night when it is lit up in changing colors.

Opening hours: Every day from 9.30am to 9.30pm except Mondays, when it is closed in the morning.

The teahouse takes its 'celebrity' name from its being used for performances, three times each day, in the morning, at noon and in the evening. Performances may be anything, by anyone of any age, and is thus similar to a western-style cabaret, (only with Chinese characteristics, of course). There are two branches of this particular teahouse - one is located on the Ancient Culture Street, the other on Xinhua Road. The one on Ancient Culture Street is more lively, perhaps even too crowded at times, while that on Xinhua Road is more relaxed with a more authentic feel to the decor. These are also good venues for seeking out both traditional snacks and traditional crafts, both of which are on sale.

For those wanting to get off the tourist track and to experience for themselves Tianjin as the locals know it, the Yan Yue Teahouse is strongly recommended. Located in Heping district, this is a quiet, modest teahouse favoured by Tianjin's residents. Here too there is a stage for performances, but whereas those in the Pleasant Memories teahouse are met with polite and quiet admiration, here the audiences are more inclined to join in with the fun on offer, passing comment as they eat melon seeds and gossip between themselves. This teahouse is of particular note for having played host to some of the earlier performances of the famous crosstalk artiste Ma Sanli.

One of Tianjin's most famous and most popular western restaurants, if you're looking for somewhere for a taste of home then the Kissling is a good choice. The first floor serves as a bakery and is a good place for snacks and sandwiches; the second floor is a buffet restaurant; the third a standard restaurant and bar; the fourth floor a French restaurant. If you're peckish in your wanderings, it's almost certain the variety available at the Kissling will provide you with something that fills the hole nicely.

The Porcelain House is a traditional French building furnished with antiques. It is located on the Tianjin Chifeng Road. The owner, Zhang Lianzhi, has taken considerable care over its furnishing and decoration, with a particular eye to ceramics through items he has collected over some considerable period, the main showcase of the Porcelain House to which it thus owes its name. Here you may find exquisite pieces of porcelain ware, as well as stone items of white marble, crystal, agate and other decorative materials. As well as the traditional porcelain ware people have in their homes, Mr. Zhang has collected tens of thousands of tiles. There are also cultural relics on display, including 300 lions of all kinds and sizes which lurk in every corner of the building, adding to the singular atmosphere.

A fun aspect of the Tianjin experience is to get up early in the morning and make your breakfast from the many street stalls selling traditional breakfast food. You can select from sugar pastry 'couvertures', (糖皮), 'guozi' fritters, (果子), a tofu speciality known as 'old curd', (lao doufu, 老豆腐), and jiang zi soybean milk, (浆子). As interesting as the food is the people. Everyone seats themselves where they can, and that means mingling with the crowd, meeting strangers, chatting and eating. The bigger and more crowded the stand, the more fun it is. Some of the stalls are state-run enterprises, including the Laoyoule stand on Tianjin's Nanshi food street and the downtown Dafulai stand.

To find Nanshi food street, head out to the more prosperous area of Heping District. It's fascinating for its architecture as well as for its food, the streets lined with buildings of a singularly Chinese character, giving the air of a fortress in their looming over the breakfast eaters. A large street, there's plenty on offer. Alongside dishes already listed, try the Goubuli steam buns, (狗不理包子), Guifaxiang fried dough twist, (桂发祥麻花), Erduoyan fried cake, (耳朵眼炸糕) and crispy rice dishes.

If that's not enough to satisfy you, then don't worry; Nanshi has gone way beyond many a traditional Chinese food street in the fare it has to offer, not only featuring traditional food from other Chinese provinces, (Shandong, Guangdong, Hunan, Jiangsu, Zhejiang, Fujian and Anhui in particular), but also in its embracing of international cuisine, most notably Japanese and Korean.

Before you leave, it's worth paying a visit to the port to see how far Tianjin has come from its early roots as gateway to the world for imperial China. Perhaps the most stunning example of its new modernity is to be found in the magnificent ships in the International Cruise Port. Several ships from several international lines are already making Tianjin their home ports, a fitting tribute to a city that has come far in the modern era while retaining so much of its vibrant past.

Tianjin is well worth the visit.

For further background information on the past referenced in this article, see our overview of Chinese history. For a broader overview of Tianjin itself, check out our more extensive guide.

Why Not Let China Highlights Take You There?

With so much on offer in Tianjin, with places to locate, hotels to book and transport to be arranged, wouldn't it be good if you could just forget all that, go there and enjoy yourself? Well, that's why we're here. China Highlights specializes in taking all the hassle out of arranging your trip and leaves you with nothing to do except have fun with a break tailored to your requirements. Just work out what you want to do and when you want to do it, then leave the rest to us by contacting our expert support staff.