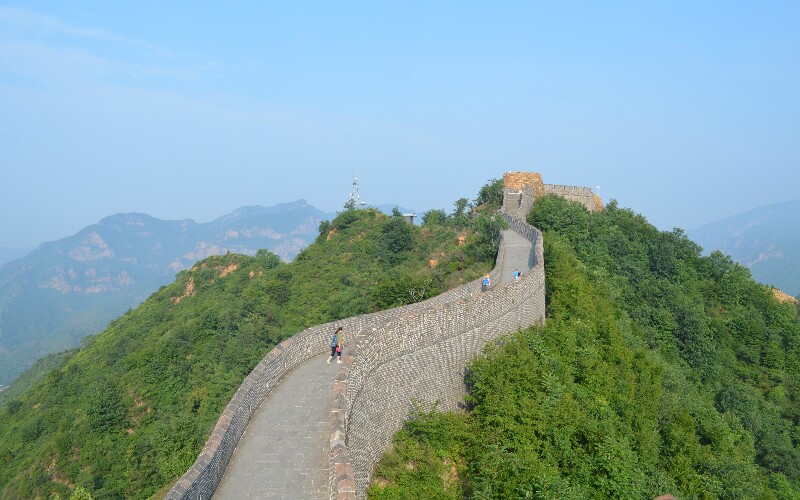 The Huangyaguan Section of the Great Wall

Huangya, means "yellow cliff". The pass takes this name from the yellowish hills and rocks nearby. Originally built in Tianbao 7th of Beiqi (557 A D), the Huangyanguan was repaired for the first time in Ming Dynasty with bricks and for the second time in 1985. In 1986 it was listed as a key relics protection target of Tianjin city.

Now it is also chosen as a patriotic education and national defense education base of Tianjin. Besides, starting form 1999, there is going to be a special tourism activity there-International Field Marathon.With various forms of water towers presented along the walls, and the largest tower of the Great Wall "PhoenixTower" and the most unique "BaguaguanCastle", Huangyaguan Great Wall is like a library of the Great Wall. By now 3025 meters of the Huangyaguan Great Wall, 20 water towers and a water pass have been repaired. This section has several featues:

Strong: With its walls and towers built on mountain ridge with an average altitude of 738 meters, the Huangyaguan is really overwhelming. To the east there is the cliff, and the west, crags. It winds its way across mountains like a dragon. Guarding a stronghold, it has been the north entrance of Jinxian.

Dangerous: On the mountains with peaks rising one higher than another, the Great wall jumps its way up and down as a linkage between the cliff and crags. Since the mountain is sloppy, the steps are very high. In some sections, it looks like that the wall is running straight up or down. When you look down, you will feel dizzy at the sight.

Beautiful: On Huangyaguan, you will be able to enjoy both mountain scenery and waterfalls and springs.

Ancient: With a history of over 1400 years, the ancient walls was first build in Beiqi, and reserved well until today. In Ming Dynasty, it was added with walls made of bricks.

How to get there: There are tourist bus available every weekend at the northeast bus station of Tianjin and there are also buses available from the Tianjin Railway Station, but fewer.