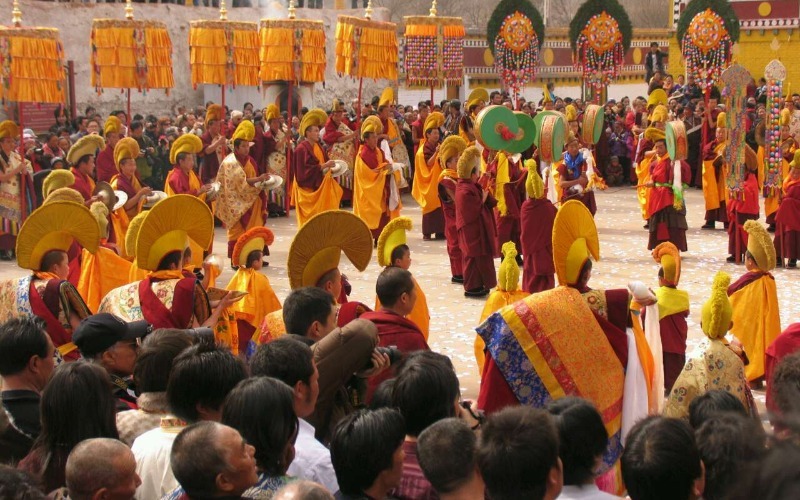 Tibetan New Year, also known as Losar, is the most important festival for Tibetan people and it is celebrated in many areas of western China (Tibet, Shangri-La, Jiuzhaigou…), Nepal, Bhutan, and northern India.

The festival celebrates the beginning of a new year on the Tibetan calendar.

The celebrations of Tibetan New Year traditionally span from the last 2 days of the old year to the 3rd day of the new year (Feb. 19th to 23rd in 2023).

Losar is a Tibetan word that means New Year. The word is composed of two characters: lo and sar. Lo means 'year' and sar means 'new'.

The celebration of Losar can be traced back to the Tibetan pre-Buddhist period (127 BC – 629 AD). At that time Tibetans were followers of the Bon religion and held a spiritual ceremony every winter.

During the ceremonies, people burnt a large quantity of incense to appease local spirits, deities, and protectors. Later this religious festival developed into an annual Tibetan Buddhist festival.

Traditionally, the celebration of Tibetan New Year lasts 5 days starting from the penultimate day of the old year and finishing on the third day of the new year.

During the last 2 days of the old year, people begin to prepare for Tibetan New Year.

Tibetan people give their houses a thorough cleaning before the New Year, which symbolizes sweeping away the bad luck of the preceding year and making their homes ready to receive good luck.

The kitchen, especially, must be cleaned because this is where food is prepared, and hence is the most important part of the house.

On Tibetan New Year's Eve, families dress up and have a New Year's Eve dinner to welcome the arrival of the new year together, which is similar in spirit to the Han (the majority Chinese ethnicity) Chinese New Year feast.

Big families of several generations sit around round tables and enjoy the food and time together.

After the reunion dinner on New Year's Eve, Tibetan people have a short ceremony for driving away evil spirits. During the ceremony, people walk the house holding a torch, while shouting, 'get out'. Its purpose is to drive out the bad luck from their houses.

On Tibetan New Year's Day, Tibetans get up early and put on new clothes after having taken a bath. They then worship the gods by placing offerings in the front of their household shrines.

The offerings usually consist of animals and demons made from a kind of dough called chemar (a box of wheat and highland barley flour that can be made into tsampa).

From the second day of Losar, Tibetan people begin to visit their relatives and friends carrying their gifts.

When Tibetan people meet, they firstly say "zasidler" ('good luck and happiness) to each other and then exchange hada (white ceremonial scarfs) to express their blessings.

When paying a Tibetan New Year visit, a simple ceremony is followed to welcome the guests' visit.

The host meets his guests with a chemar (a box tsampa flour) in his hand, then pinches a little roasted barley flour from the chemar with his thumb and index finger and sprinkles it in the air three times, and then puts some of the tsampa in his mouth.

During the Tibetan New Year period, usually on the third day, Tibetan people choose a lucky hour to hang prayer flags on their rooftops to pray for a bumper harvest, good luck, and prosperity in the new year.

On that day, all family members are dressed up and gather on the top of their house to enjoy the happy activity.

Praying flags are made up of many colorful triangular flags bound on a rope. The colors of the flags are always arranged in sequence: blue, white, red, green, then yellow.

Each color symbolizes a natural element: blue for the sky, white for clouds, red for fire, green for water, and yellow for soil.

Hanging prayer flags is also a way to show their respect to these five elements in nature, which are believed to be the material basis of Tibetan people's lives.

Wei Sang is one of the most important ceremonies of the Tibetan New Year. It can take place in local monasteries or at home. A stove is used for burning the pine tree branches whether in the monasteries or in locals' houses.

During the burning, people chant Buddhism scriptures, adding cypress branches and barley powder to the fires. The smoke from the burning fire, sooths and comfort the devoted Tibet people, who believe this act incurs a blessing from the buddhas and bodhisattvas.

Other common Tibetan New Year foods include khapse (fried pastries), droma dresil (sweet rice), and chang (highland barley wine). Tibetan eat these foods not only for their wholesome, warming taste but also for their symbolic meanings.

This must-eat food for Tibetan New Year is a kind of dumpling soup. When making guthuk, apart from normal ingredients like dough for the wrapper, meat, and garlic or onion, some interesting elements are wrapped inside, such as chili, wool, salt, rice, or charcoal.

Does this sound crazy? It has a rich symbolic meaning... If white-colored ingredients such as salt or rice are found hidden in the dough, it is believed to be a good sign.

If someone finds coal in his dumpling, it has the same meaning as finding coal in a Christmas stocking: it means the person has been bad or "black-hearted", and he/she is forced to drink wine as a punishment.

Before Tibetan New Year's Day, making khapse can be a pretext for a family party, and family members make arrangements for making khapse together. It symbolizes abundant food and a sweet life for the family in the coming new year.

Droma dresil is rice mixed with dry fruit, butter, and sugar and is considered auspicious rice that should be served at the reunion dinner for Tibetan New Year. Droma dresil is usually served by the eldest child in the family.

When eating droma dresil, Tibetan people pinch a few grains of rice and sprinkle them into the air, which is a symbolic offering to their gods. Then they put some droma dresil into their mouths whilst saying certain words of blessing.

Chang is Tibetans' low alcohol wine made from barley. In the morning, on the first day of Tibetan New Year, every Tibetan family cooks a bowl of chang mixed with brown sugar in preparation for their guests' visits.

When guests arrive, a cup of chang is offered to warm them up.

When you travel to Tibet during Tibetan New Year, you can say "Tashi Delek" to Tibetan people, which means 'good luck and happiness'.

When paying a New Year's visit to a family, people always express their best wishes to the hostess first, saying "Ama badro kunkham sang", which means 'Wishing the hostess health and longevity '.

In Tibet, women play an important role in the family, so they are always respected and greeted first.

Tibet is usually closed to foreign tourists during the Tibetan New Year period. Shoton Festival in summer, one of the most important festivals in Tibet, is also worth seeing. Contact us to create a Tibet tour.