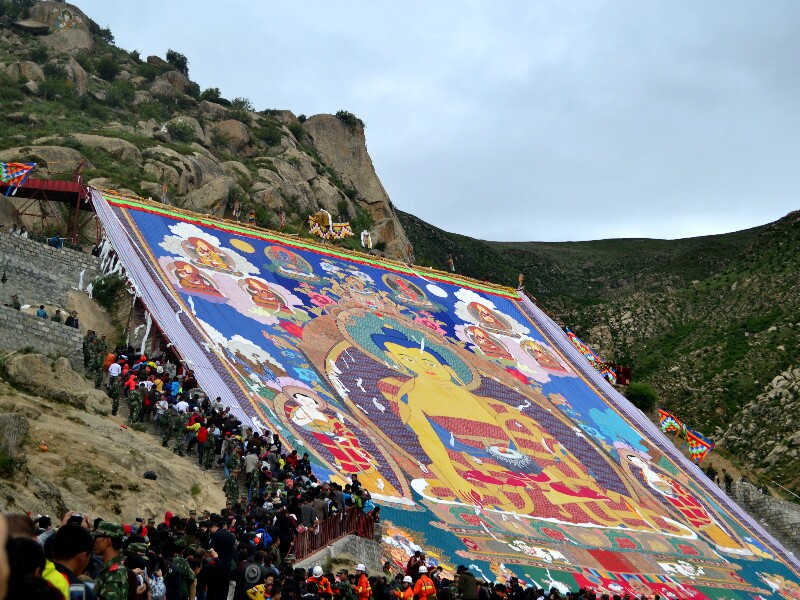 The Shoton Festival is one of the most popular traditional festivals in Tibet. It celebrates eating yogurt, the Tibetan monks who end their season of meditation, the watching of Tibetan dramatic operas, and Tibetan Buddhism.

It is held annually in the month of August, or late in the sixth month, or early in the seventh month of the Tibetan calendar. The Shoton Festival has become a comprehensive celebration that influences the culture of Tibet.

It is a great occasion for both Tibetans and tourists. It has also become a market time, and a time for competitions, performances, and entertainment. Attending the festival gives visitors a special feel for Tibet and its culture.

During the festival, there are celebrations in the streets, squares, and monasteries in Lhasa. The main part of the celebration activities is centered on the western part of the city of Lhasa in Tibet on the grounds of the palace of the Dalai Lama that is called Norbulingka (罗布林卡).

The Gelug Sect of Buddhism has a regulation that between April and June according to the Tibetan calendar lamas may only practice Buddhism in monasteries to avoid stepping on and killing tiny living things.

When the ban ends, lamas go out of the monasteries and laymen offer them sour milk and perform Tibetan operas. After 1642, the Gandain Phodrang (Paradise Palace) of the Drepung Monastery became the political, religious and cultural center of Tibet.

Tens of thousands of people went there each year to give yogurt to the lamas and to ask for blessings. The Tibetan Opera troupes and wild yak dancing troupes all came to perform. In this way, the Shoton Festival began.

On the first day of the festival, the Thangka is scheduled to be unveiled at the Drepung Monastery. Then the celebrations will begin at Norbulingka.

Along with the Tibetan operas and other religious activities, visitors can also watch yak races, horse races, and dance.

The prelude of the Shoton Festival is the Buddha exhibition in Drepung Monastery. The tranquil valley becomes excited. With the sound of a horn reverberating through the valley, about 100 lamas will carry the large-scale Thangka portraying Qamba Buddha (or Maitreya) out of the Coqen Hall of the Drepung Monastery and walk towards the west of the monastery where a special platform is set up for the Buddha picture exhibition.

At that moment, the mulberry smoke rises from all directions, horns resound and scripture chanting starts. The large Thangka will then be slowly opened up. People rush up to offer white hada.

Countless hada fly in front of the Buddha picture forming a great scene. Within two hours, the Thangka will be rolled up again and carried back. People will not see it until the next year.

In the Tibetan language, the word Shoton means sour milk banquet. Buddhists go to the mountains to cultivate themselves, and then after the period of cultivation, their family members will go and meet them in the mountains.

On their way home, people drink yogurt, sing, and dance. During the festival, people will gather in the park to celebrate the festival by eating yogurt.

Due to the limited time, the performances are only a distillation of actual Tibetan Opera. Real Tibetan Operas may go on for several days. The Norbulingka and other parks of Lhasa are dotted with colorful tents.

To get to the festival, you have to get to Tibet. Foreign travelers have to apply for travel permits to enter Tibet. And you are not allowed to travel to Tibet without a tour guide.

Read more about Tibet permits and how to enter Tibet.

And you should pay attention to the climate and altitude of Tibet. To have a nice and safe trip in such a high-altitude area, you should know what to bring.

Read more about what to pack for a Tibet tour.

We can help you design to trip to Tibet to experience this festival. See the following popular Tibet tours for inspiration: